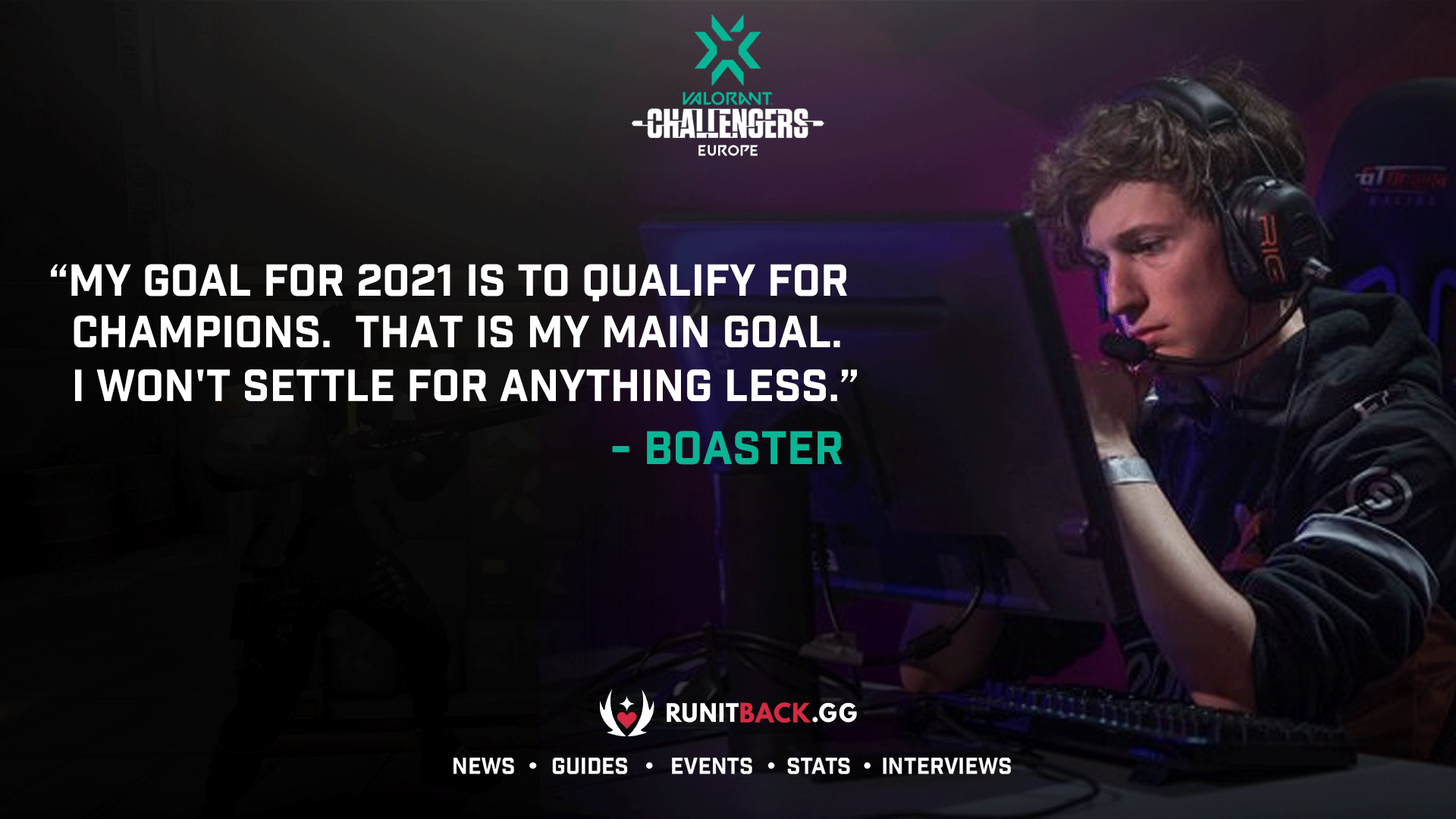 Boaster on what went wrong against Wave, getting signed by Fnatic, and goal for 2021

Following Fnatic’s matchup against Wave Esports at VCT Europe Challengers 1 main event, we got together with Jake “Boaster” Howlett. Jake opened up about his thoughts after the loss, his team’s mindset following being picked up by Fnatic, and his personal aim in Valorant in 2021.

RunItBack: If you could run me through your main takeaways from your matchup against Wave. After a successful Bind, you nearly closed out Haven, but overtime did not go in your favor. Split then did not fall your way. Any takeaways from the BO3?

Boaster: So Bind, obviously, I guess we don’t really need to talk about Bind, it was comfortable and felt good. Haven, we’ve been sat on that comp [agent composition] for quite a while now, and I think it’s good, I just think we, just felt like the boys and I were playing not to lose I guess you could say. If you’re playing not to lose then it can really impact your performance and it really came down to the wire. If I did passive setups then there’s a chance we could have screwed it up. But then I started to throw in aggressive setups so the boys didn’t have to think as much because it felt like we were playing scared almost. When we play scared you’re just asking to be abused by the sort of comp they had which was a high-control, high-burst comp as well, with double dashes and stuff. So yeah, it’s unfortunate, but it happens.

And then on Split, I think we should have chosen Icebox. But we can’t base it off of that. We should have a 5-map pool by now so… I think our Split wasn’t very comfortable as we did a comp-swap and then the map updated, and then I kind of had to change how we play-styled. I guess our CT setups clicked for the previous two Split games but it seems like in today’s game we couldn’t hit our shots. I remember them dashing into me on A site three times and I just couldn’t get that first kill which is really important to stopping the dashes as those make the space.

RunItBack: Taking into account that you had previous contact with players such as Carcass, did that somehow influence how you prepared for this matchup?

Boaster: No, not really, I went into this matchup the same as I do with any important game, which is trying to check out their VOD reviews, though they barely had any. The ones they did have were from ages ago. So I had a look at their pistols and kind of playstyle. And I’d say I recounted their pistols, but I actually didn’t, except for Split, I didn’t look at their Split game because initially I thought we were going to be playing Icebox and the Split game they had were from ages ago so I didn’t want to contaminate my angle on the game.

However, they haven’t actually changed it up. They played the same on Haven and Bind. Bind was a bit easier to counter, but Haven didn’t seem to go our way. And even though the pistols were RNG, and even though they put us in our place on the pistol rounds, we still lost them. Pistol rounds, super important, and I just prepared, but sadly, we couldn’t take the dub.

RunItBack: Changing the tone and topic slightly. How does it feel to finally get signed by an org? Obviously the contract must make you feel comfortable, but does that change anything in your mindset?

Boaster: I’m not sure if it changes my mindset, I think I’m still on the same thought process in terms of how I approach games and how I prepare myself and the team. I don’t know if the boys are slightly more affected. Obviously we were running a SUMN, the unsigned team with zero pressure. Now we’ve been picked up by Fnatic so I guess we want to prove ourselves and as inexperienced players there’s a bit of pressure there to not get upset by Wave or the previous teams [in the qualifiers], there’s extra pressure against teams that are good but not in the same position us as. I guess there was added pressure maybe. I guess there could have been with the boys, as it wasn’t exactly great that game [against Wave].

But yeah, getting signed by Fnatic, obviously great. But I think we have to play the long game and grow as a team and grow as players and as individuals. Just because we just got signed to an org doesn’t mean we’re suddenly top-tier quality. We have to have time and get used to the idea of playing under an org and under pressure, even more pressure than before. Similar to Liquid when they got signed. People were pressuring them but it seems like they’re slowly getting back into their form now. So yeah, I think we’re going to have to do the same because we lack in experience for sure. And this is the experience, playing these officials, and keep growing and improving.

RunItBack: What are Fnatic’s goals for 2021? Any team you’d like defeat or any overall goal?

Boaster: I think my goal for 2021 is to qualify for Champions. That is my main goal. I won’t settle for anything less. So I’m going to personally do whatever I can in order to reach Champions. If it doesn’t work out, it doesn’t work out. There’s always next year. I don’t care who I play, I don’t care about any of that. I just want to win and I want to be noted as one of the best teams. Now that’s going to take time, and experience like I said. And each year, doesn’t matter which year, I will just strive for that goal, to be the best. If I can’t make it this year, so be it. But next year I won’t have it for a no. Or whatever the word is.

We thank Jake for his time. Run It Back wishes all the best for Fnatic moving forward.