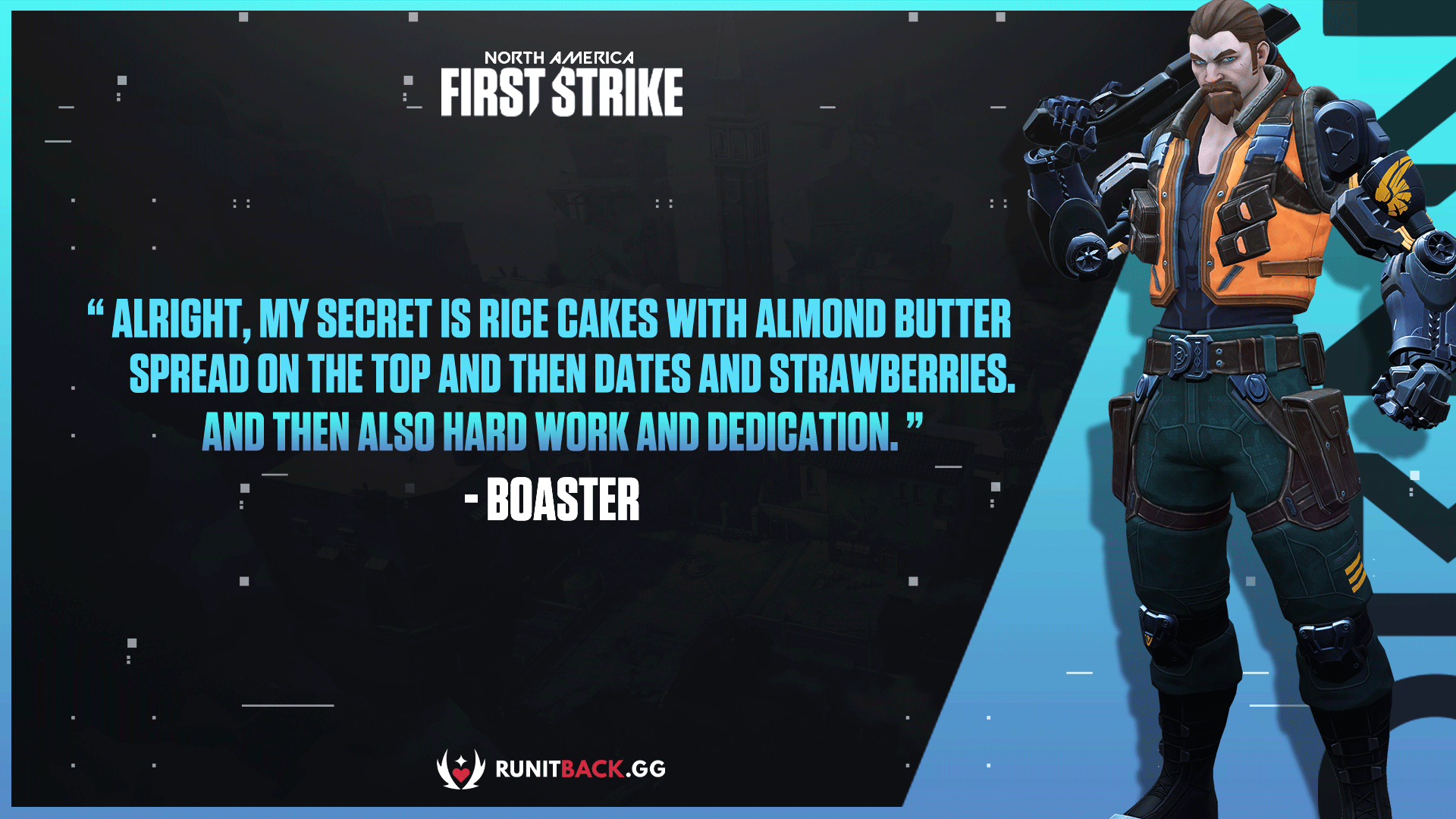 Following the grand final of the European First Strike Regional Finals between SUMN FC and Team Heretics, we got a hold of SUMN’s captain, Jake “Boaster” Howlett. It’s fair to say that this was the most entertaining interview that RunItBack has done at the First Strike event. Just have a read yourself.

RunItBack: So, Boaster, first of all, congratulations on coming this far into the biggest Valorant tournament to date without even being signed by an organization. You also managed to beat ANGE1’s FPX along the way. What’s your secret?

Boaster: My secret? Alright, my secret is rice cakes with almond butter spread on the top and then dates and strawberries. That’s my secret. And then also hard work and dedication because that’s what’s going to get you there. A little bit of sprinkling of skill as well. A little bit of that on top. And that’s our team right there.

RunItBack: But it’s mostly about the rice cakes, right?

Boaster: Exactly, it’s all about the rice cakes.

RunItBack: *laughs* On a bit more serious note, if I can touch upon today’s game [against Team Heretics]. Was there anything in particular that didn’t exactly go to plan for your team?

Boaster: No, I think to get this far I was already proud of the boys. I think the only thing that didn’t go to plan was, I guess, they had three experienced core members that came from CS, who had quite a few series and tournaments and won, or were like at the top of CS. While we were quite inexperienced. So we had some experience from tsack and a teeny bit from me. But in comparison to them, it felt like they had the kind of confidence and edge on us, and were able to shoot heads. But, I think getting to the finals, there’s nothing to be sad about, I think it was just a really good experience going into 2021.

RunItBack: I wanted to also ask about the map picks. Did that all go to plan? Or looking at the result now, would you say that perhaps you would have changed the order of the maps somehow?

Boaster: No, maps didn’t matter at all. We knew they were going to pick Ascent because obviously we’re unsigned, and we’re having to deal with school, schedules, and all that jazz, real life stuff, and I just couldn’t get five maps down in the time frame. Especially like, when teams are so good at Ascent, so I decided to focus on Icebox coming into this event, and just ban Ascent, and then if it would come to the best-of-five finals where we’d have to play it, then we’d just try do some stuff that we’d prepared.

I think in terms of the picks, I think it all went according to plan. We had a game plan on Haven, but, it was just my inexperiences in terms of IGLing (in-game leading), I haven’t been playing at this level, pro level, I haven’t been competing the whole of 2019 and then I came back when Valorant came back, and I was like I’m going to start competing again. I had a lot to learn from this tournament. Overall, I think everything went according to plan. It’s just that we didn’t have the experience I guess. But, I’m still really proud of the boys. Hopefully, 2021, you’ll see us growing. We’ve got so much room for growth, that’s the best thing.

RunItBack: For sure. If at this stage you can get into the final of the biggest Valorant tournament to date, then next year is going to be massive for you, isn’t it?

Boaster: Yeah, I don’t really know what else is going on next year except for the Champions Tour, but we’re going to give it our all for that and hope that SUMN FC can still remain like top four and qualify, etc. And keep improving, as long as we keep improving and growing, I’m happy personally. And staying humble too.

RunItBack: Alright, you mentioned staying as SUMN FC but aren’t you going to get picked up by an org any time soon. Anything you can tell us about that?

Boaster: Honestly, coming up to this event, all I’ve done is prepare for the game. And on the stream, everyone’s literally all like “Yo, SUMN FC, they’re unsigned, go pick em’ up”, so we’ll see. I mean, maybe orgs are going to be stupid not to want to pick us up by now? *laughs* Cause we’re in the finals? No, we’ll see. I don’t know, honestly. My main focus was First Strike. Now, 2021, my main focus will be Champions [Tour]. I’m not a businessman, I just like playing video games.

Boaster: Yeah, I mean, they say it’s a dream, but, it’s hard work, and it’s stressful and it’s tiring at times, but we live for these competitions and the adrenaline and the camaraderie with the boys and winning stuff, it’s just fun. And beating people.

Boaster: Yeah, FPX, was a nice victory for us. I’ve been wanting to play them for a while since we lost to them in contenders. Beating them was tasty, I’m really happy about that.

RunItBack: Any closing words to your fans?

Boaster: 2021, hopefully see you there. Keep up the support and hopefully we won’t let you down the next finals we’re in.

We thank Boaster for taking his precious time to chat with us, as well as for his lightheartedness and humor. Of course, Run It Back wishes further achievements such as these in 2021 for SUMN FC.

*Answers may have been altered slightly for clarity*