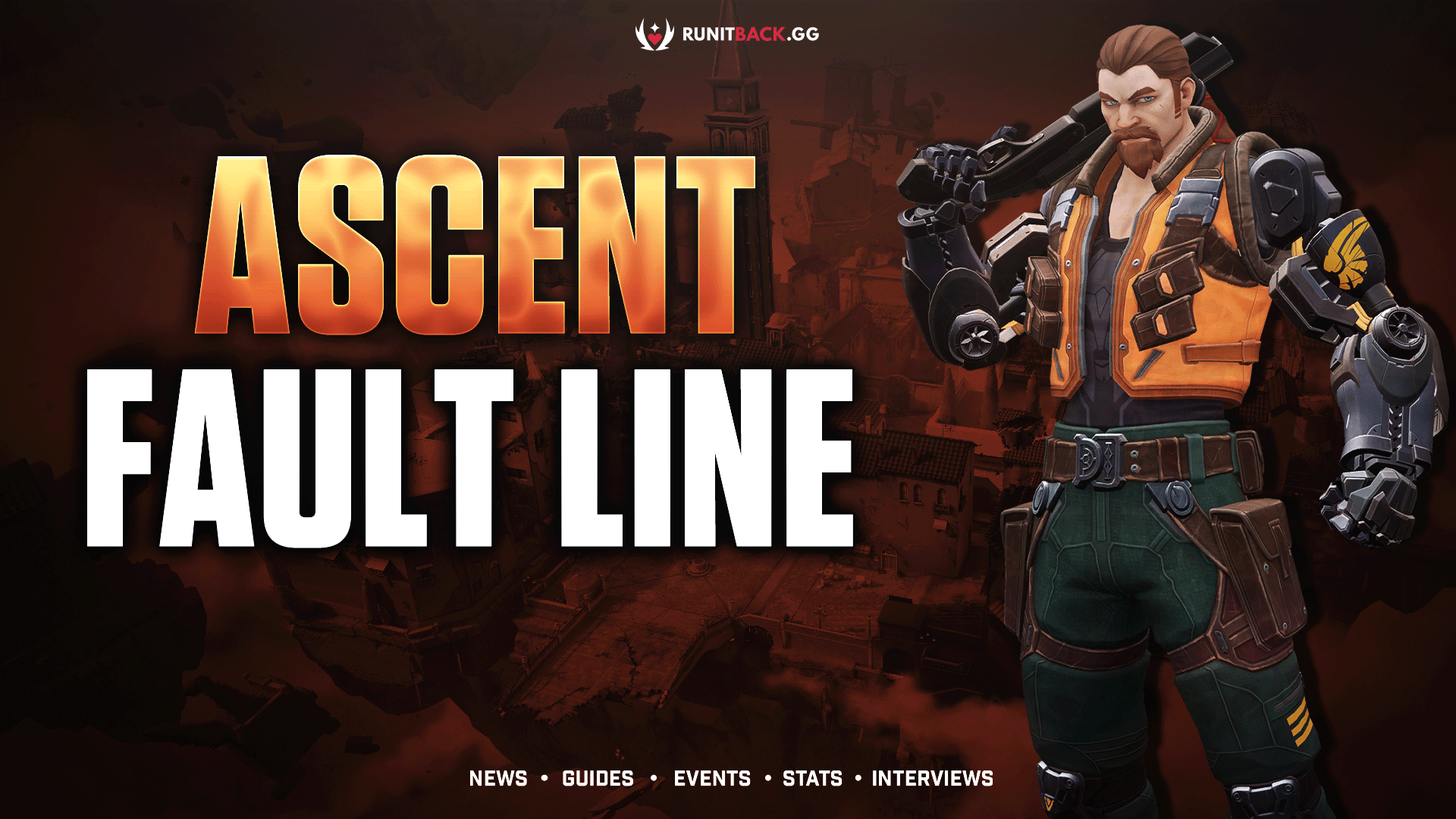 Several Valorant agents started off on the wrong foot in the eyes of Riot Games. Breach was definitely one of them. His abilities are just too good to be ignored. This caused Riot Games to buff the Initiator beyond belief. The red-haired Swede is a dream of an agent on both attack and defense with his Flashpoint, Aftershock, and Fault Line abilities.

Breach’s Fault Line is one of the only abilities that can act as an entry attack or deter the same as a defender. The changes to the agent have seen his pick rate skyrocket. For those looking to give the man with the robotic arms a try, Run It Back is here to give you the best of Breach’s Fault Line lineups on Ascent.

The premise of this Fault Line is to concuss or displace enemies positioned on A Site. The trickiest part is to the move across the A Site entrance without being seen or taken out. Breach needs to rotate over to A Wine with the help of his Flashpoint or a smoke from a friendly Omen, Jett, Brimstone, or Cypher. This will allow for a proper set up.

Breach’s Fault Line should be placed along the right side of A Site. There is a good chance that an enemy player or two will be caught in the ability. A set of large boxes are placed in the immediate right of the A Site entryway. As well, the large box that blocks the far corner of A Heaven will typically host a defender. This is the best bet to catch an opponent in the Fault Line.

This Fault Line placement is another useful location for an attacking Breach. While it can also be used on defense to disrupt an enemy flank, it will be most useful after the spike is planted and A Site is taken over. There are some enemies that will come through A Heaven to try and retake the site. This could prevent that retake completely.

Breach should be placed underneath A Heaven, commonly referred to as Hell. Back all the way up with the entirety of Heaven in front. Charge up the Fault Line and it will run all the way through Heaven, by Window, and even a bit toward Mid. Let it rip and throw off the game plan of the approaching defenders. They will be dazed and left vulnerable. Get a teammate to hop onto the box near Heaven and take them out.

The best Breach Fault Line for A Site defense comes from near Mid Catwalk. Of course, the Fault Line can be used almost anywhere depending on the placement of the opposing team. These are just prior set ups for predictable attacking and defending positions. If the enemies are attacking A Site, there is a good chance they will come through A Main.

Sneak over to the cubby between Catwalk and A Tree. Listen for those footsteps stomping toward A Site. Charge the Fault Line and send the quake. This will disrupt their push no matter how far down A Main they have gotten. This Fault Line placement goes all the way through to A Wine and then some. Once it connects, make sure a teammate is ready to pop out and get some picks.

Pushing Mid is a popular choice on Ascent. Both sites have an entry point from Mid that can help with control. Attackers often push up Mid Catwalk to get into A Tree and open up A Site for the taking. Breach can easily open up the cubby and prevent immediate retaliation from any teammates heading through Catwalk.

As Breach, line up next to the glass box on the attacker side of Catwalk. Charge the Fault Line and rotate just a little. This will put the path of the Fault Line through the cubby and the A Tree entrance. Any opponent in the Fault Line will be dazed if they don’t move. Otherwise, they will be displaced. That will keep them off guard long enough for those approaching from Catwalk to rush in and quickly finish them off.

Breach can defend the same rotations he can set up as an attacker. Mid Pizza is a good place for defenders to sit and wait out a round. The rotation to either site can be done easily to help teammates in need. If the call comes in that opponents are pushing through Mid Catwalk, this position is perfect to ruin their game plan.

Charge up the Fault Line and it will cover the entire length of Catwalk. The enemies will either be dazed or forced to jump into Mid Courtyard where they will be unprotected. This opens them up for a teammate to take them out from Mid Bottom or another to surprise them from the end of the Catwalk.

Rotate to the left of Mid Pizza into the Mid Market area near the door. This is a safe and secure location for Breach to help with an opposing B Site push. His Fault Line can cover the long hall of B Main much like it does A Main. It is not uncommon for an entire squad to push through B Main to try and overwhelm the defenders and take the site.

That is where Breach comes in. The ability will do one of three possible things. The opposing players will be delayed as they retreat behind the Ult Orb box, back to B Lobby, or up into the open corner of B Main. They may also simply be caught in the Fault Line, dazed, allowing a teammate to move forward for some easy kills. Or they will be completely flustered, rushing out toward B Site entirely too early to avoid the ability and get taken out that way.

Another defensive placement on B Site sees Breach line up with the link between B Lobby and B Main. This Fault Line is 100% a set up for a teammate to move in and either take control of B Main as a defender or pick off some enemies early in the round. It serves the same purpose as the B Site defensive placement from Mid Market.

Charge up the Fault Line all the way through, past the entryway and the shack. Who knows, maybe the ability will catch somebody hiding back in B Lobby. If that push is coming through, this will send then running back, catch them off guard for a teammate to strike, or force them to make the mistake of rushing right into their own demise.

The best Fault Line placement for attacking B Site goes through the porch and back to the defender spawn area. Breach players will need to wait for the barrier to drop and the round to officially start to get to this location. Post up by the door between B Lobby and Mid Link. Do not charge this straight ahead. It won’t cover all of the spots that way.

The trick here is to catch any opponents in the corner by the porch, in the doorway from Mid Market, and in the back corner of the spawn entrance. This will either daze them if they refuse to give up their position, or displace them for a quick moment. Once it launches, paired with some smokes and a flash or two from other agents, the rest of the team should easily be able to overwhelm B Site.

These are our best Fault Line spots for Breach on Valoran’t Ascent.