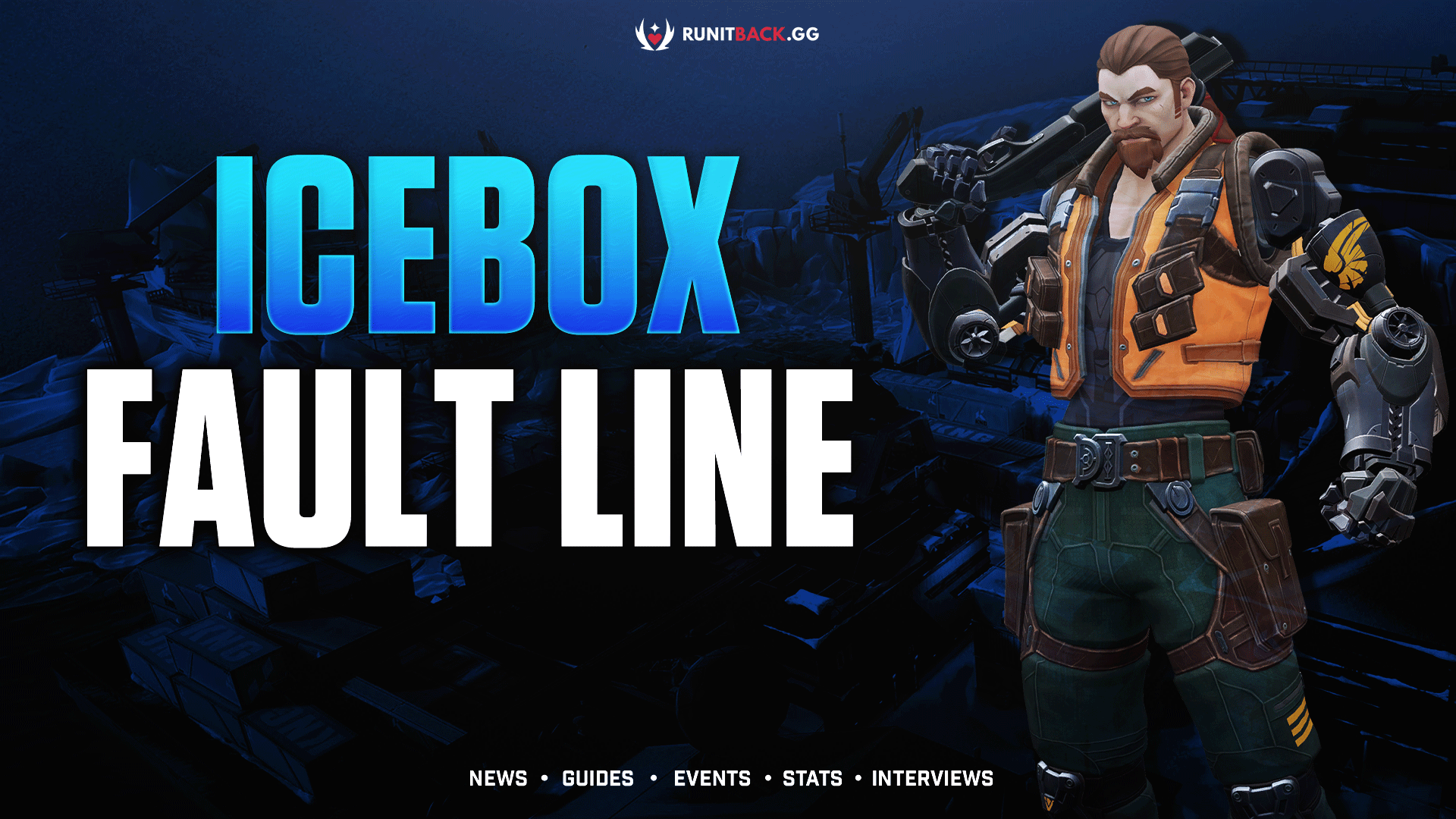 Valorant’s newest map is one that players are still learning. Icebox has a variety of indoor and outdoor locations. It is a twists and turns galore, combined with big, open areas. It can be quite overwhelming at first. What is even more overwhelming is being one of the poor souls that lost their way and falling victim to a Breach Fault Line. Not only will that player be lost in the maze of Icebox, they will be dazed and trapped by the Breach Fault Line and its unforgiving quake.

Run It Back has already delivered the best placements for this ability on Ascent and Bind. Now, the frozen tundra of Icebox welcomes the Swedish Initiator aboard.

Icebox is actually quite massive even with just two sites. A Site is a far distance from B Site. It is indoors, hosting a ton of cover, a horizontal zipline, and some sneaky angles. Players can take the long route through Mid or attack directly through the building. The tight walkways can make the Breach Fault Line invaluable when pushing A Site. When entering through the left side, line up the ability so that it covers all the way through the nest and through Heaven. This will displace those enemies while teammates can push up and deal with those on the right side.

On the contrary, if the Breach player decides to approach A more to the right side, the player needs to be cautious. In order to get the back corner of Heaven, behind the box on site, and around the corner ahead, Breach will need some friendly cover as this position could be potentially dangerous if an opponent peeks from the left pathway. Quickly charge the Fault Line and catch the enemies holding those right side angles off guard. Daze them, send them running, whatever the case may be. Move up with the team and finish them off while waiting for the other defenders to rotate over.

There is one more solid placement on A Site for the Breach Fault Line. This is a little less head on than the previous two. The location of this Fault Line somewhat combines the others in a way. Enter the building from the left side. There will be a stack of boxes in the corner that can be scaled. Face toward A Site and charge the Fault Line. It can be adjusted any way, but your best bet is to send it through the corridor, the nest, and Heaven. This will get anyone holding the back corner of Heaven, the zipline from the nest, and the tighter angle to the left of the immediate pathway to A.

On the opposite side of things, the Breach Fault Line can deter enemies or set up some easy early picks if they get caught in the quake. The placement sees Breach set up behind the defending side’s zipline nest. After fully charging the ability, it will send the quake to the other end of the building. It will daze or displace any of the attackers coming up that direct lane to the A Site. This makes it easy for Breach’s defending teammates to move up and hold different angles that wouldn’t be available from the get go.

Breach can shift over to the right side of A Site while defending. While it doesn’t cover an entire lane, it covers a little bit of both. A Site attackers can move up from the left or right. Set up near the exit toward Mid. Charge up the Fault Line ability. It will send quakes to the close right side, the middle, and the farther back left side. It is a very good location to cover multiple approaches. The fact that it goes across also causes problems for the opposing team. It creates a short lived blockade that they have to wait out before they can continue pushing.

Pushing Mid on Icebox can open up either site for the taking, though it can be a daunting task. Typically, a defender holding Mid will sit on or near the raised platform of Mid Boiler. This platform overlooks the entire Mid lane. As an attacker, Breach can approach Mid without being spotted by the defender in that location. Charging up the Fault Line will send it all way through that area. This will daze the enemy or force them to move, opening up the attacking team for a fast push through the Mid lane.

Defending Mid will see the Breach Fault Line go in the other direction. If the attackers are coming through Mid, sit next to the ramp near Defender Spawn. This position gives the ability enough room to cover the entire length of the Mid lane. Release the Fault Line and quickly go up the ramp. Look over the platform and be prepared. The enemies in Mid will be dazed. They will be easy picks for the Breach or any teammates also watching Mid.

B Site on Icebox could very well be the hardest site to take in Valorant. Abilities like the Breach Fault Line can reduce that difficulty. After leaving spawn as an attacker, there is a small room right before the first lane toward B Yellow. This is referred to as B Garage. From there, Breach can send his quakes to the boundary of the map. Operator and longer range players like to hold the lane from that back corner. This will remove them as a threat for a short time to make an advancement.

Another popular place for defenders to hold B is near the site itself. There is a small structure with a zipline there that allows players to hide nearby and within. This position must be taken from a Mid push. Charge the Fault Line so that it goes as far as it can. It can be released from here, to the right, or to the left. This can make for a good distraction while teammates approach B Site from a different location.

There are many ways to defend B Site with the Breach Fault Line. B Yellow is named after the yellow shipping crate there. Set up behind the crate so the opponents pushing towards B won’t know what’s coming. Charge the Fault Line ability and send it down the long pathway that approaches B Yellow. It can be shifted to the right to cover that section of the pathway, as well.

This Fault Line placement can be altered to fit the situation, much like the one near B Yellow. Breach can rotate to either side of the structure and charge the ability. Just make sure there is enough cover. This lane comes from Mid and can be quite surprising if teammates are engaged with enemies elsewhere. The width of the Fault Line is massive compared to some of the openings that players can move through. It will easily daze the opposition, delaying their push or setting them up for demise.

Another approach from Mid can be a death sentence for attackers with the Breach Fault Line waiting for them. In Mid, there is a ramp that leads up to a small kitchen area. It is a tiny hallway that the Fault Line can easily cover. If the attackers are bold enough to stomp through this area, they are in for a rude awakening. Send the ability through the entirety of the location. They will be trapped with nowhere to run.

For more guides, breaking news, and event information, stay tuned to Run It Back! Also, follow our Twitter and join our Discord channel for the latest updates, giveaways, and community events!