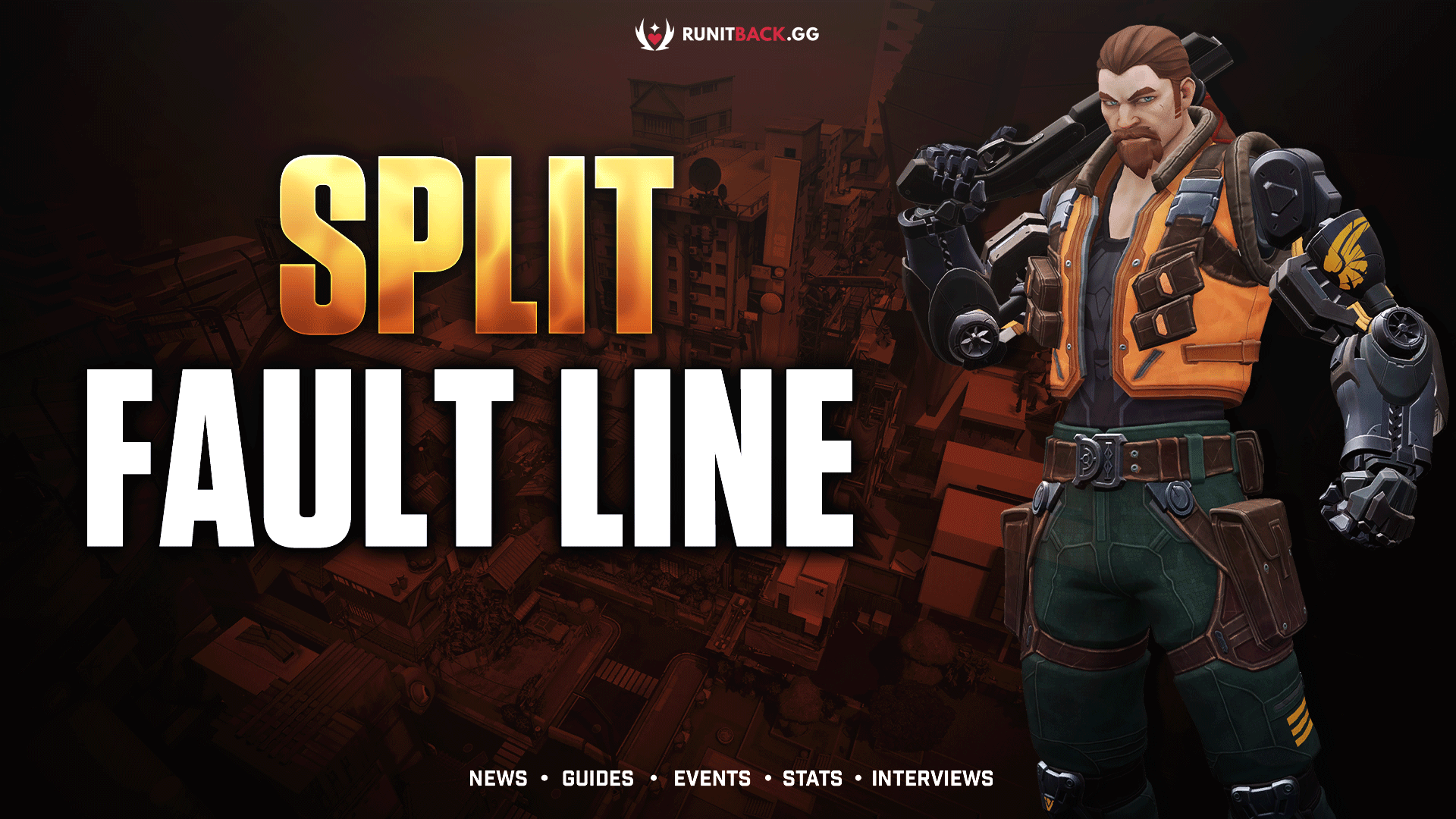 Last but not least, Run It Back presents the Breach Fault Line guide for Split. Be sure to study the guides for Ascent, Bind, Icebox, and Haven in order to master Breach’s Fault Line and send those pesky opponents packing.

Split is not a small map by any means, but it is very compact throughout. The pathways that lead to each site are extremely tight. This makes the Breach Fault Line inescapable. In such close quarters, players won’t be able to run as the Fault Line can cover nearly every lane on the map.

Attacking A Site on Split needs to be done quickly. Doing it too slow will allow the remaining enemies to rotate over and make it that much harder to take. Breach needs to start out in A Sewer. This is very similar to the Viper Toxic Screen location from here. The Breach Fault Line will go all the way through the ramp and near the spawn entrance to Heaven. This will allow the team to push low without the immediate worry of anyone watching from A Ramp.

This placement does just a slightly different job than the first. The goal here is to have already made sure that A Ramp is clear. It’s almost a guarantee that each opposing player will not be on the low side of A Site. So, while some of Breach’s teammates can head up to Heaven, it wouldn’t be a bad idea to completely push low. The Fault Line here takes care of A Rafters. It will push enemies back into Heaven, down low to get picked off, and allows for a brief moment where the defenders will be barred from entering A Site from Heaven.

Defending A Site on Split can be a nightmare. One defender too little or one peek too early or late, can open things up for the attackers in an instant. Having a Breach Fault Line available is an easy way to delay or even completely deter that initial A Site rush. There is only one way to get directly to the A Site locations. As Breach, stay safe behind the wall at the top of A Ramp. Send the ability toward where the attackers are sure to come from.

The A Site defense can be done even more straight on. Breach can post up on the outskirts of the A Site plant area. More than likely, the footsteps of the attackers will be heard through the wall if they are coming that way. Charge the entire Fault Line and it will go all the way back to the link from Attacker Spawn. Once the quakes are unleashed, the only places to hide are in the small cubby by the business and in the A Sewer area. A teammate on A Ramp can easily pop out and get a pick on an unsuspecting dazed opponent.

This can be done for a defending Breach if the flank is obviously coming through spawn. Otherwise, this Breach Fault Line is best reserved for an attacker that has planted the spike and is waiting for the defender team to rotate. The entire pathway from A side to the spawn alleyway will be covered by the ability. If a teammate is waiting in Heaven or just outside of A Vents, the affected enemies won’t be able to stop a quick swing around the corner followed by a barrage of bullets. To escape, they would have to be all the way back by the spawn location or run into Heaven and potentially give themselves up that way.

Mid is a good place to send one or two teammates to scout out the locations of the enemy players. The best option for Breach when going Mid starts at the top of A Sewer. The Fault Line, when fully charged, can take care of the box outside of Mid Ropes, a solid chunk of Mid Mail, and the opening of B Heaven. This can make it easy for teammates pushing Mid from B side to move through uncontested. The true fight comes in when it has been decided whether to move toward A or B. This ability placement can open up B quite well.

Breach is better off defending a direct site on Split, but sometimes, the player may have to hold Mid. The Mid Market area is a popular place for attackers to start their assault on Mid. Breach needs to remain behind the wall in Mid Vents. This will prevent being picked off by a potential Operator player. Charge the Fault Line and it will hug the entire right wall and go through the back of that Mid Market location. If anyone is slowly moving up that wall or is spying in the back, they’ll be caught by the quake.

B might be harder to attack than A. Attackers can go high or low to try and take A Site while the high ground at B can only be contested by going Mid. There will surely be at least a couple of players trying to lock down B Site. B Heaven is a popular place for defenders to sit. It allows them to hold B and Mid. Line up with the giant crab and the Scuttle Shack sign. This will send the Breach Fault Line through B Heaven and disrupt their defensive plan long enough for a push in.

If Breach is heading to B Site with the team, it is crucial to cross the B Garage entrance without being eliminated. This will allow Breach to charge the Fault Line to the far back corner of the site. If there is sneaky player on the boxes to the immediate left or hiding behind the newsstand, they’ll be caught in the path of the ability. This will allow one player to focus on that area to pick off the dazed or displaced defenders. The remaining teammates can then turn their attention to Heaven and begin clearing the site that way.

As mentioned previously, the direct approaches to each site on Split are extremely small. It could be enough to trigger someone’s claustrophobia. A defending Breach is the worst thing that could happen for attackers on this map. Behind the newsstand is the best place to defend the push from B Garage. Unfortunately, sending the Fault Line straight on here would leave Breach vulnerable. Instead, it needs to be skewed just a bit. Regardless of that, it will cover the entrance entryway from Garage and then some.

By no means should a player ever just give up Heaven. If that happens by force, though, it is okay to retreat to the alleyway on the spawn side. From there, the Breach Fault Line can cover the entirety of B Heaven. If the push comes in from Mid and Heaven is overtaken, this will make taking it back a simple task. If there is another teammate nearby or one is pinned down near the site, this will allow them to move. Whether they move to safety or move in for the kill is dependent on where they’re stationed.

The exact same situation applies here as it did for A Spawn. Defending this with Breach will more than likely come as an attacker after the spike has been planted. The enemy team could very well rotate back through their spawn and try to retake B Site from there. Be waiting with the Fault Line ability. Charging it will send it well past the pathway from spawn. The only places to escape to are the Spawn location and onto the stairway up to Heaven. They will either be delayed or forced to rush to their demise.