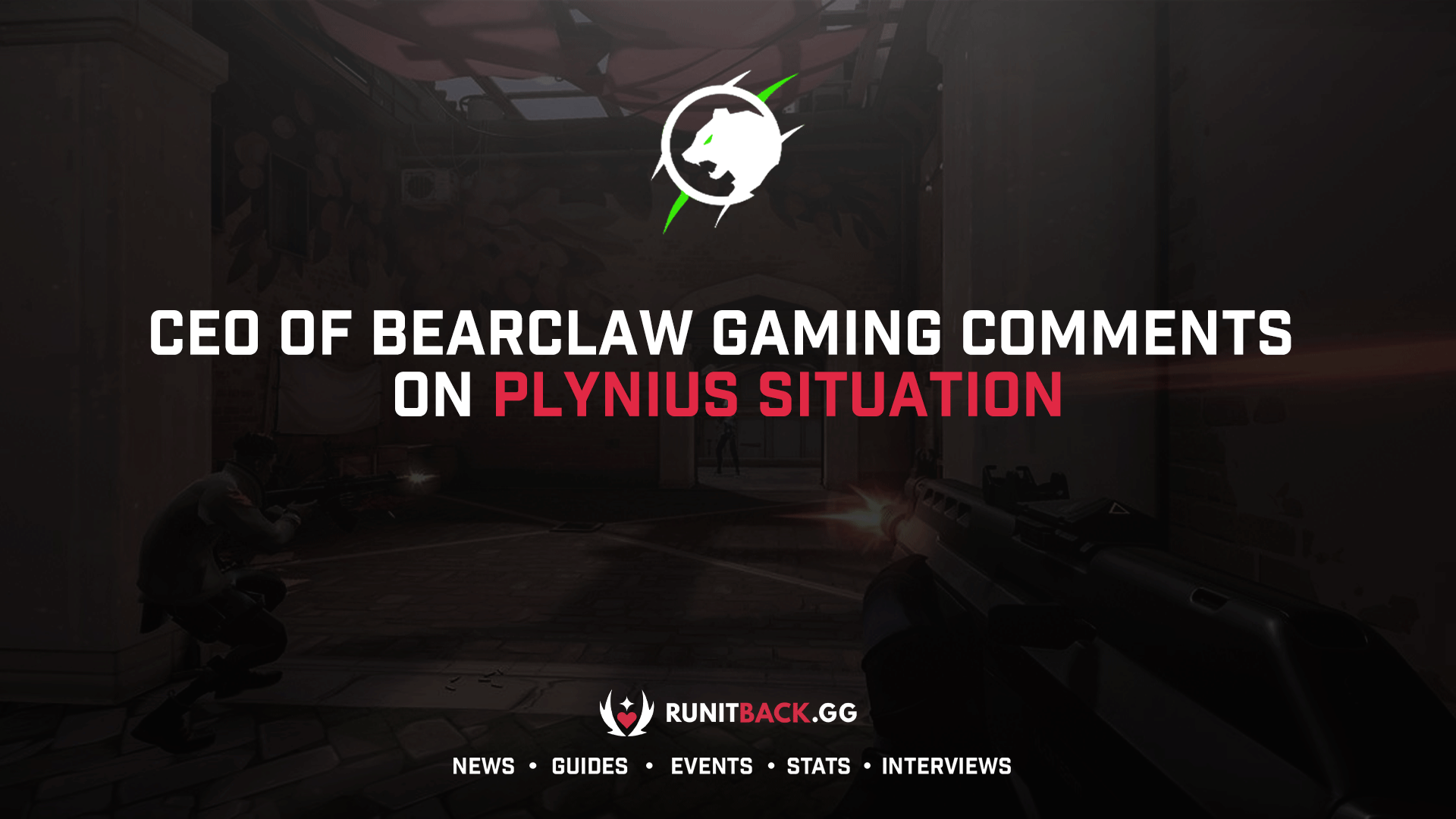 We’ve managed to chat with the CEO of esports organization BearClaw Gaming, Harley “Reaper” Parks. Harley was willing to share the details of what has transpired between the Valorant team and parent company, Plynius, ultimately forcing Harley’s hand to part with the Valorant roster.

RunItBack: Can you describe what exactly happened and what are, and were, the consequences for BearClaw Gaming?

Reaper: Ok, where do I start. So, we were kind of worried at the start of February. My team and I started to hear rumors from some older employees saying that they weren’t paid (by Plynius). Payday came around, we did not get paid. We waited for about four days and we still didn’t get paid and there were no updates really on us getting paid. So I was like “Hey, no one’s been paid, the players haven’t been paid, I haven’t been paid, what’s going on?” There was no update really. People kept avoiding the question. So, after a bunch of “where’s the money?”, things did not go so well. There were some arguments and disagreements internally, especially with me trying to stick up for the players. Personally, I cannot afford the players. That’s why I had to let them go from the BearClaw side. Easiest way to say it – no one was paid.

The contracts were made between Plynius and the players, Plynius and the management, Plynius and I. The contracts were never made between BearClaw and the players. Therefore, the responsibility, I’d say lies on the investment company (Plynius). The contract, since there’s an NDA, I can’t say much, but since it’s out on Twitter, someone on one of the other companies’ account, stated things about my contract. I don’t know why they’d say things on that account as well as deciding to post my termination letter online. I believe that was quite private. There are some things that I can’t agree on.

RunItBack: When you were trying to get in touch with Plynius asking about pay, were you met with replies or did they just ignore your messages?

Reaper: They would reply, yes, but they would change the subject.

RunItBack: Why do you think Plynius did this? What’s the motive behind signing a Valorant team and then not going through with the arrangement?

Reaper: So, all I know is that after the first of February, when I started hearing rumors of employees and ex-employees not getting paid (of Plynius), I just started to get really worried. I was not sure about the motives. I’m not 100% sure if it’s just a money issue, with money going out. I know that they contacted other teams such as SLT and Ardor, and promised the same things to them. I’m just not sure of the motives for them. At the end of the day I think they have good motives. But I think there just may be a sense of communication issues that just does not allow things to move smoothly. Truly, I have no clue. I don’t know the best answer. But, I just think the easiest thing for me to do was just part ways [with the roster] and not deal with that situation.

RunItBack: Did you think of pursuing legal action against Plynius?

Reaper: There are some talks about law with two companies that I will be having to deal with soon, assuming it is on the table. Personally, I would not like to comment further if I’m going to go in or not. For now I’m not sure. Right now I’m not too worried, I’m just going to wait. Everything so far is in my legal favor but I want to wait for now.

RunItBack: So the players have left BearClaw. They’ve decided to stick together under an org-less team, correct?

Reaper: They rebranded to Team MUYAHO. I’m still going to be a big fan of them and support them. We all left on good terms. I’m still going to have high respect for these players, even months down the line. They wanted opportunities by sticking together so that other teams can come in and bring good salaries. They want to stick together as they’re really good together and have fantastic chemistry. Like I said, I cannot afford them. I don’t want to tether them down and I don’t want to tell them that I can do so much when right now I’m focusing on building the brand. In the end, I respect them 100% and I’m sure they can go and find great teams and do really good in the future.

RunItBack: What are your own personal plans right now? What are you going to focus on in the nearest future?

Reaper: I’m definitely creating a three and a six-month plan. I’ve been able to get a lot of good friends from other organisations and good friends that I used to work with in the past to come in and join my organization as management. The goal is to be transparent to our community. We want to be 100% open and honest to our community. Our goal is to really get a couple games that are within my price range and the management is helping me out right now as volunteers. Since we’re all just banding together right now, they all see the vision in the future. My dreams for BearClaw is youth empowerment. I want it to be the esports organization of the future. Have youth empowerment, curriculum, and allow place for everyone to grow. Also, have professional teams that can mentor others. Be a role model to youth. I want all these teams to promote a different story than just entertainment. I want them to promote honesty, transparency, youth empowerment, equality.

We want to work up and build our brand. We’re going to start doing things like giveaways now and partnering with other organisations. We’ve just partnered up with the Asean Youth Organization. Youth empowerment is definitely number one right now.

RunItBack: To clarify, are you going to try to get back into Valorant?

Reaper: I believe I’m going to stay out of the Valorant scene for a couple of months. I’d like to definitely take the damage that has been done by others in my hands and assist the players that were hurt. Basically, fix the damage before getting back into the Valorant scene.

We thank Harley for her time to explain and clarify the situation and wish her, and her BearClaw organization, all the best of luck.