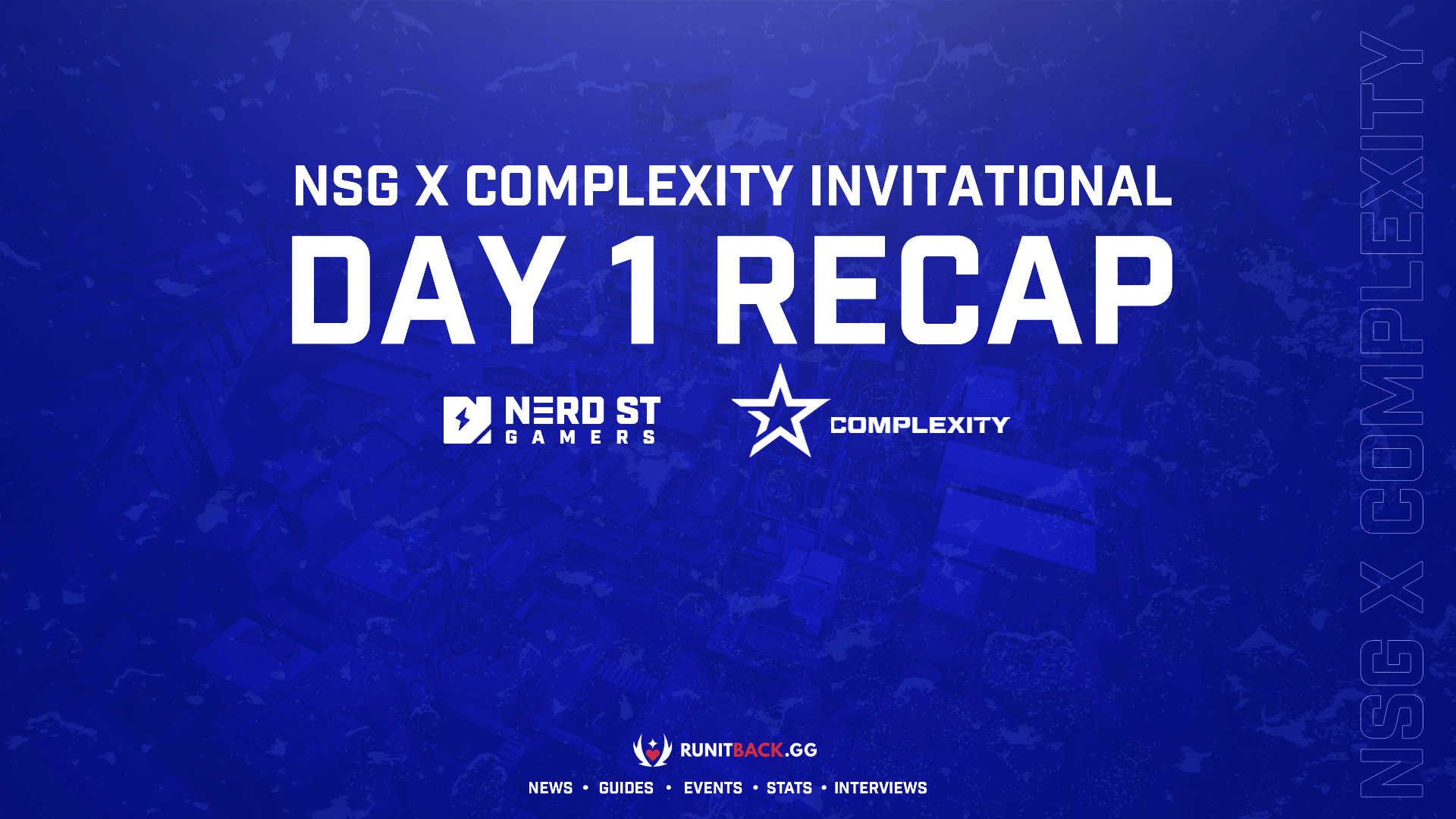 After a long, action packed day one of Valorant, the group stages of the Complexity x NSG Invitational have finished. Eight top-tier teams have pushed through to the playoffs. Today saw some standout performances from both Equinox and Renegades, including Renegades’ absolutely dominant matchup against Spacestation Gaming (SSG). Advancing to playoffs alongside both teams are Complexity, Luminosity Gaming (LG), Dignitas, XSET, NRG, and Built by Gamers (BBG).

Disclaimer: Due to only two matches being broadcast, we’ve decided to cover those in-depth. The rest of the results are found after the detailed descriptions of Equinox vs Andbox and Renegades vs Spacestation Gaming.

The first map of this intense best of three series (BO3), was none other than the fan favorite Bind. Equinox kicked things off on the Attacking side with a dominant showing in their first two rounds winning both, until losing the third after running into Bradley “ANDROID” Fodor’s robot-like aim. That clutch-up round from ANDROID however almost ended up being Andbox’s only round of the half, later managing to pull through with three wins out of twelve to finish out the half. Obviously not yet discouraged, Andbox kicked off their Attacking pistol round with a solid 3k from Jaccob “yay” Whiteaker, as well as a plant in the round.

That single pistol round led Andbox to take four straight rounds in a row from Equinox, bringing the match score to 7:9 and really making this look winnable. Equinox’s Ian “Texerino” Botsch quickly decided he wouldn’t be having any of that and ended the streak with a Showstopper double kill. That play brought him up to a 3k in the round and 22 kills total, making him the highest fragging player on the server. ANDROID continued trying his best to bring his team a victory in the first map racking up an impressive 29 kills while gaining another 4 rounds. Unfortunately, they just fell short of a victory, leaving Andbox with 11 rounds on the board and Equinox with 13 to close it out.

The second map was Andbox’s pick, Split. However, it definitely didn’t seem that way after the first three rounds went the way of Equinox on the defending side. Equinox wasn’t allowed to have the spotlight for long after Andbox came through in the fourth round with some amazing Sheriff shots while on a save, which managed to give them another two rounds bringing the map to an even 3:3 scoreline. The rest of the half was a back and forth battle between Texerino’s ruthless Raze and yay’s brilliant Breach resulting in a standstill at the end of a half, bringing the map to a once again even 6:6.

The second half started exactly like the first, with three rounds instantly going the way of Equinox except this time on the attacking side. Following the same trend as the first half, Andbox pulled through with their first round win of the half being on an eco round, with nothing but Frenzies and Sheriffs. They managed to somehow grab three more rounds after the initial one, and brought the scoreline up to 10:9, before Texerino and Kevin “mina” Nguyen of Equinox, got aggressive and managed to grab themselves their 10th and final round of the map. Andbox hit back harder on their map pick, closing Split out with a 13:10 scoreline, tying the series up 1-1.

The decider map to determine which team will be advancing to playoffs and which team will be forced to battle it out in the loser’s bracket was Ascent. To say the least, it brought some thrills. Ascent was the first map of this series to see neither team start the match off with three round wins in a row. Andbox managed to pick up the first two on the defending side, while Equinox stole the third round with a strong B push managing to isolate Andbox’s Sebastian “seb” Bucki, for a free frag giving them the spike plant and eventually the round. Andbox took that round loss as a hint and brought themselves up to a 5:1 lead until Equinox eventually did the same and brought the map to yet another even 6:6 half.

The second half of Ascent continued the same back and forth round trend between the two teams. Neither of the two teams was able to run away with a significant lead. Andbox did get close to running away with the match when they won the 17th round, making the scoreline 9:8 and leaving Equinox’s economy absolutely devastated. Anyone could have seen that Andbox had the potential to run away with another possible two or more round wins, but Equinox wasn’t done quite yet. With only a single Vandal on Texerino, Equinox force bought pistols around him hoping to make something work… and they did. mina decided it was time for a hero play and burst through a smoke in Tree room near A Site with only a Frenzy to his name and managed to hit an amazing spray transfer double kill against two rifles. This left him with 5 HP and eventually his side closed out the round in their favor.

That double kill managed to get Equinox back on their feet with guns in their hands and later, four more round wins to show for it. This brought the overall map score to a 13:10 Equinox win. Equinox progressed to Day 2 playoffs and Andbox was forced to battle it out in the loser’s bracket eventually losing to Luminosity.

After facing each other once in the opening matches (BO1), the two team’s paths led back together in the Decider Match of Group D where they would compete in a BO3 to see who was truly the better team. The first map was SSG’s pick, being Ascent. Renegades however, was quick to let them know that map pick wasn’t going to necessarily mean map win. Renegades immediately ran off with 5 round wins, only giving up the third, before SSG could grab their second round of the half. SSG tried every possible play they could on their attacking side, going B to start off with, later trying A, and even working for mid, but they were shut down nearly every single time. They did manage to finish off the first half with four round wins but Alexander “retrQ” Kadan’s Reyna seemed to be too much to handle.

The second half, unfortunately for SSG, was just as dominant as the first for Renegades. They seemed to be able to take whichever site they chose whenever they wanted it. The only dominant round that SSG managed to show was an outstanding aggressive Phoenix ace from Kelden “Boostio” Pupello. The ace managed to set SSG up for their 7th and final round win of the map, with the final round going to the side of Renegades.

Going into map number 2, SSG must have been feeling the pressure. They had just lost their own map pick in embarrassing fashion, only managing to win some rounds due to mistakes from the Renegades side, and now they had to play on their opponent’s map pick. Unfortunately for SSG, the map began in a similar fashion, with Renegades taking the Pistol round as the attackers, leading them into a second round win. SSG did manage to pick up the third and fifth round before Renegades decided they were done playing with their food. On the tenth round of the first half with Renegades leading 6:3, SSG found themselves in a retake position with the man advantage being four to three in their favor. Devon “randyySAVAGE” Bréard of Renegades however, showed us that sometimes numbers don’t matter, and showed off an amazing one versus four site hold plus a bit of “tactical crouching”. The half later finished 9:3 with Renegades in the lead.

Renegades kicked off the second half with a pistol round win making it look nearly impossible for SSG to come back from a seven round deficit. SSG however, decided to show everyone that they weren’t done quite yet and put up five rounds in a row against the Renegades defense before losing two and allowing Renegades to bring the map to match point. Even on match point in a three versus five, SSG kept fighting and managed to pull back two more rounds, showcasing some outstanding aim and nearly making the match look winnable. Unfortunately SSG was unable to bring themselves up to a matchpoint and pushed the game into overtime, bringing them to a 13-10 loss and therefore, eliminating them from the tournament. Renegades moves on to the Day 2 Playoffs, proving they belong in the Top tier teams of North America once again.

Tune in to Run It Back once again for a Recap of Day two and the tournament Finals! You can also browse our website to find Valorant Gameplay Guides, exclusive interviews, breaking news, and more!