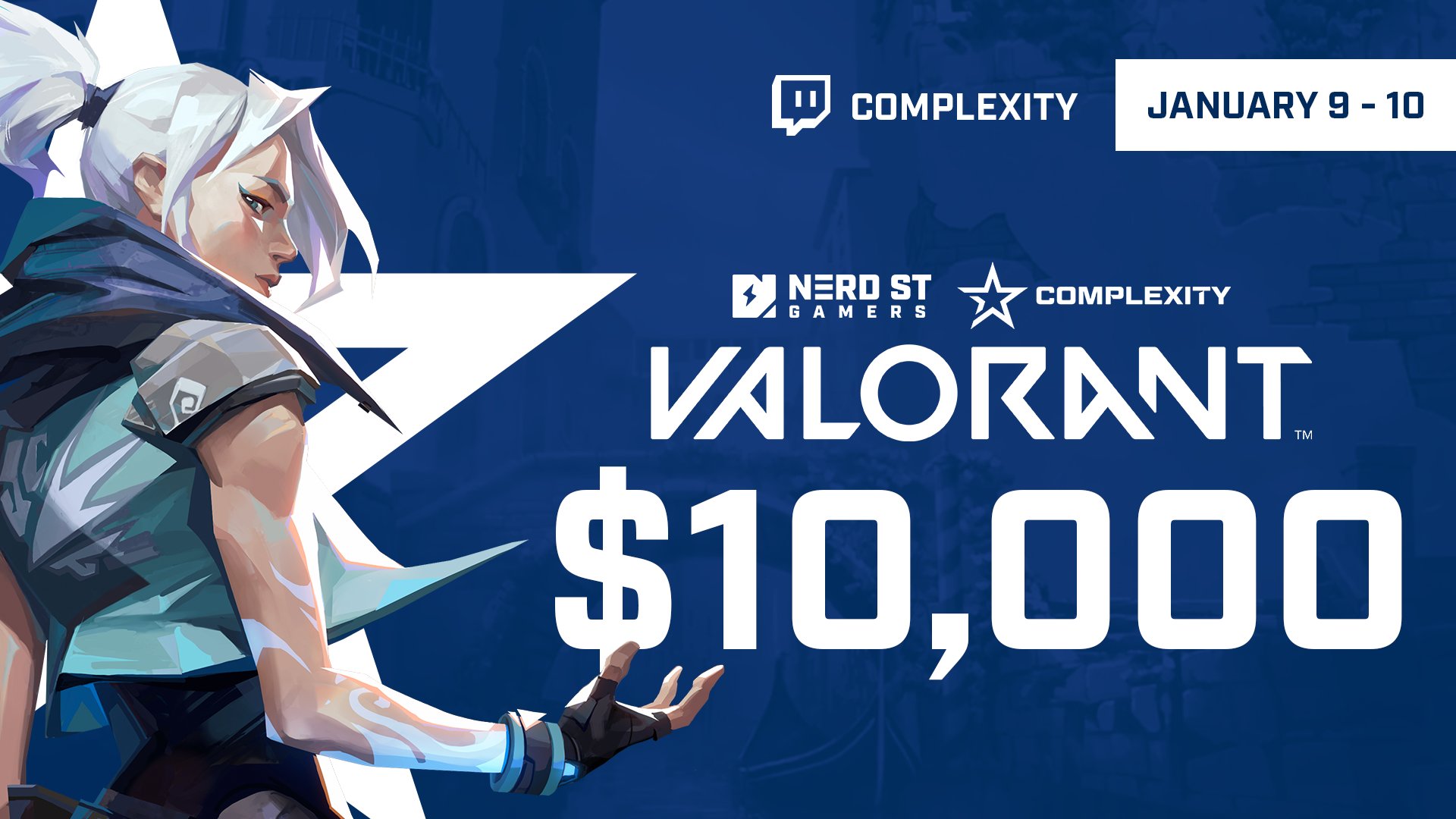 One of the longest standing and most notable esports organizations in North America, Complexity, has partnered with Nerd Street Gamers (NSG) to host the first major Valorant tournament of 2021 in the region. The upcoming Complexity Valorant Invitational will be a unique opportunity for rising talent in the scene to prove their worth against the top dogs of North America while trying to grab their share of the $10,000 prize pool.

Twelve teams have been invited to the tournament while the remaining four of sixteen, had to first place in the top four of the NSG Monthly December tournament to secure their spot in the invitational. The four teams we saw qualify back in December were NRG, Spacestation Gaming (SSG), Built by Gamers (BBG), as well as Prospects, who have already managed to prove their worth as one of the top unsigned talents in North America.

Nerd Street Gamers will use a Group Stage format for this tournament. There will be four groups overall, consisting of four teams each. Only one of the top two teams from each group will advance to the playoffs bracket. During the Group stages, all opening and elimination matches will be best-of-one (BO1), while winners’ and decider matches will be best-of-three (BO3).

All playoff matches will be single elimination and BO3, while the Grand Finals will be played out in a BO5 format. The groups have not officially been seeded or announced by NSG or Complexity as of January 8.

Gen.G was originally the second team invited by Complexity, which would have made them one of the biggest competitors on this list. Gen.G’s own Danny “huynh” Huynh, unfortunately confirmed in a recent livestream that Gen.G had to back out of the invitational. This is most likely due to their lacking of a fifth player with the recent benching of PLAYER1.

The biggest teams to watch out for this weekend are going to be Andbox, Dignitas, Luminosity, and Renegades. All four teams rank inside the top 14 in North America according to Liquipedia. Dignitas is coming off a near first place finish after losing to Gen.G in the Pittsburgh Knights Before Christmas Tournament, and will be looking to make up for it with a win. Renegades have also proven their skill recently, with a close second place finish behind Envy in the Cloud9 To The Skyes tournament back in December.

It’s also key to note, that both XSET and Equinox also participated in the Knights tournament, and finished in third and fourth respectively. Two of the other powerhouses being Luminosity and Andbox, haven’t competed in a tournament since November of 2020. Andbox did however, finish off their last tournament with a win and are definitely out to get another. This statistic could be important since both teams are less predictable due to the lack of recent performance data compared to other teams. Lookout for potential upsets and blowouts!

It’s important not to disregard any of the other participating teams, since they’ve all proven their skill and earned a spot in the Complexity Valorant Invitational. The team ‘Project’, should be an interesting one to watch. Project consists of Addison “zecK” Gorzeck, Dajon “chase” Lopez, and Nate “payen” Lopez, who all played for Mamba Mode Gaming before the Organization’s unfortunate collapse. Alongside them are NiSMO from Prospects, and dazzLe from Ranked Stars. This will be the team’s first official tournament together and considering their individual talent , they shouldn’t be cast aside.

Another potential underdog to watch out for is going to be Time In. Controversially known as Ninja and friends, as it is led by star streamer, Tyler “Ninja” Blevins, this unsigned juggernaut knows how to put up a fight. With about 59 maps played, boasting wins against the likes of Gen.G, FaZe Clan, and Prospects, Time In could be a force to be reckoned with.

The tournament will begin on January 9 and run through to January 10. You can tune into the main tournament stream over at Complexity’s twitch channel or at Nerd Street Gamer’s Twitch channel.

Regardless of the matchups we end up seeing this weekend, there is definitely going to be loads of action!

Tune in to Run It Back for day-by-day recaps of the Complexity Invitational. You can also browse our website to find Valorant Gameplay Guides, exclusive interviews, breaking news, and more!