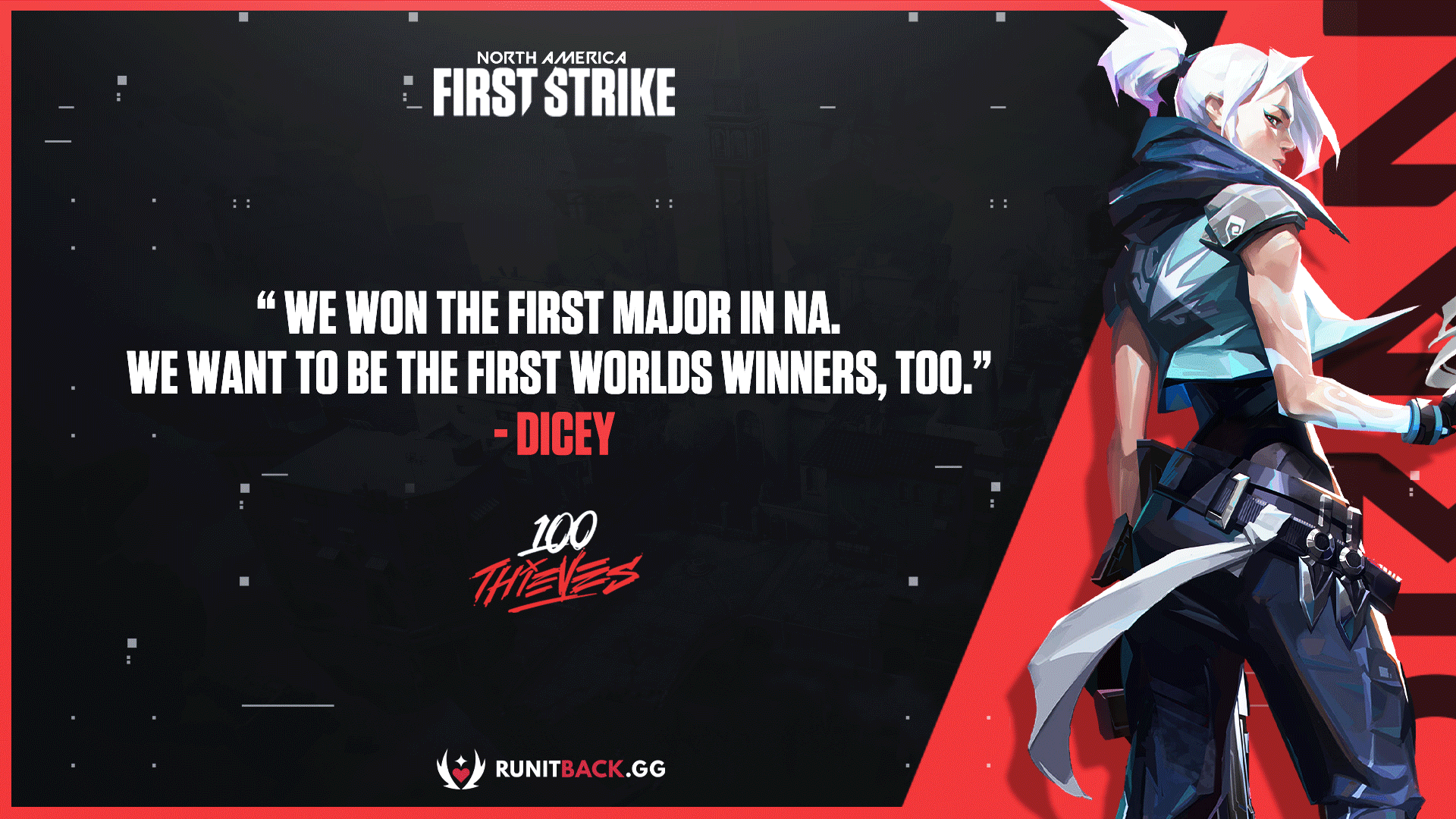 100 Thieves are the Valorant North American First Strike Champions. The entire event was a solid showing of Valorant action by all teams involved. As things wrapped up, Run It Back was given the opportunity to discuss the results with Quan “dicey” Tran. He was happy to discuss the outcome of the game, how things played out, and what he thinks of the other regions within Valorant.

Run It Back: The first map of the biggest game in the entire tournament goes to overtime. What did winning that huge map, in that fashion, do for the team’s morale?

dicey: It was really amazing. We don’t practice Split to be honest. We were going into the first map thinking, “Okay, let’s warm up.” If we win it, we win it. If we lose it, we lose it. It’s whatever. But we end up winning a map that we had no practice on or anything. We just won it. After that everyone was super pumped. We genuinely expected to lose that maybe, solely because we don’t practice it. In OT, on a map we don’t even play? We’ve got this. We’ve got this dub.

Run It Back: Bind was almost as close as Split. What were some things that you saw between the two teams that went right and wrong?

dicey: The thing they did to bring it back, they started to change the pacing of their attack. They started faking, they slowed down and didn’t execute as fast. That caught us off guard the first couple of rounds. Once we got the hang of it, we just held sites, you know? Trust your teammates and anchor the sites. Once we did that, we managed to close it out. On that last round, the B hold, no one rotated off A and stuff. We had a good plan to close out the game basically.

Run It Back: On Ascent and Haven, you guys appeared to start things off very quickly and aggressively. Being up in maps, was that the plan? Or did you just want to hurry and take TSM out to win the whole thing?

dicey: When you’re up maps in a BO5, or a BO3 even, you play with a little pressure off. You know that have the map leverage. You’re more confident in your play, aim duels, and stuff like that. We started off fast because we knew we had the momentum going in. Everybody was feeling really good and hitting their shots. We wanted to just take it to them, go fast, and try to knock them while they’re done. That’s what we did. It managed to work out well for us.

Run It Back: In terms of Duelists, many see you and Asuna as the new generation, the top Duelist duo in the game. You’re like Babe Ruth and Lou Gherig, you know? Jordan and Pippen. Montana and Rice. How does it feel to just frag out with Asuna in these important games?

dicey: It feels great. We started off on Immortals. We started off on the same team in the beginning. We’ve been playing together for so long. There’s so much chemistry. We know how each other plays. Being able to win a major title and being called one of the best Duelist duos in the game right now, to know how young we are, being online brothers to an extent, it feels great winning with a teammate I’ve had since the beginning.

Run It Back: Do you feel like 100 Thieves are the best team in North America now?

dicey: I feel like right now, on our A game, we’re better than a lot of teams. When I can put my foot down and say we are the best in NA is when we manage to defeat Envy with ease. Envy is the only team so far that just…like, they were really good against us. We didn’t perform to the best of our abilities. We haven’t beaten them solidly yet. After we do that, I feel we can put our foot down as the best. Right now, I feel we are top two at least, or a top three contender for the best.

Run It Back: Are there any teams from the other regions’ First Strike events that you just really want to face at some point?

dicey: I would personally like to play Vision Strikers. I like watching them play. I like how they play. Especially Rb on Jett. It’s more aggro. There’s more rifling. It’s really cool to watch them. I feel like they would be a really good match up to play against.

Run It Back: Do you think there is a massive shift in styles when it comes to other regions?

dicey: Like any team, we just want to win Worlds. We won the first major in NA. We want to be the first Worlds winners, too. That would be a really good feeling.

Thank you to dicey for the interview and congratulations to 100 Thieves on winning the North American First Strike tournament.

*Answers may have been altered slightly for the sake of clarity.*

Stay tuned to Run It Back as we wrap up our First Strike coverage and deliver the best in Valorant news, guides, and more!