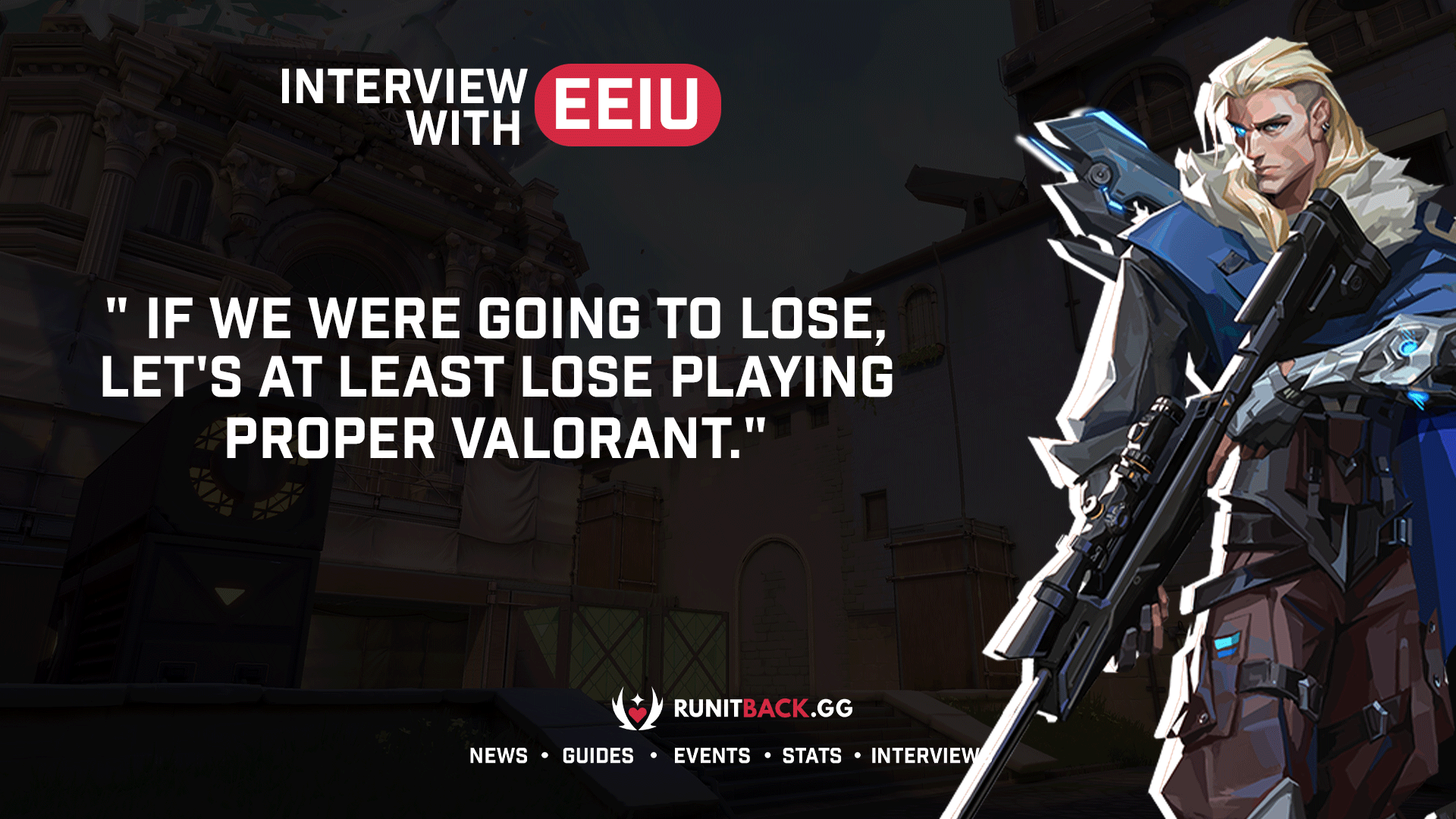 eeiu speaks on comeback against XSET and preparedness for Cloud9 Blue

NRG was moments away from dropping the first map against XSET during the NA Challengers Finals. They persevered and brought it back to overtime, eventually winning, and going on to close out the second map and the series. After their stellar performance, Run It Back sat down with Daniel “eeiu” Vucenovic to talk about the wild comeback, his role on the team, and the next round against Cloud9 Blue.

eeiu speaks on comeback against XSET and preparedness for Cloud9 Blue

Run It Back: Both teams ran the same comp on Ascent and it showed out to be extremely even in the first half. Well, XSET pulled ahead and was one round away from taking the first map for quite some time. What in the world was going through your head and coming through the comms when NRG brought it back to win in overtime?

eeiu: I remember, even before overtime, when we were still in regulation and they were at match point, everyone was just telling each other to focus up and try and win this game. If we were going to lose, let’s at least lose playing proper Valorant. Instead of hitting our heads against the wall. I feel at that point, once XSET let us into overtime through regulation, the game was over for them. They won the defuse on the first round of overtime, but that round that they won was more aim duel wise. We didn’t hit our shots, but I feel we played the round proper. It goes back to regulation, when we all put our minds into the game and focused up. Ever since that point, XSET just couldn’t get back in it.

Run It Back: With such a huge lead at the half on Bind, was there any worry that XSET might complete the comeback attempt like you guys did on the first map?

eeiu: We were up about 8:1, we were talking about their comp. We noticed they were running Skye and Sova. It wasn’t a CT heavy comp, where you’d run like a Sage with a Killjoy. Or a Cypher with a Killjoy. A lot of Sentinels. Their comp was more T heavy. We were really confident heading to the T side. We weren’t too confident against this team on pistols, even though we read the pistol round right. Even with the pistol win, we cleanly closed it out in the end. Because their comp isn’t that good on defense.

Run It Back: Playing as Sova, what do you feel is your role in the comp? Are there any things you may do differently from other players who select Sova?

eeiu: I feel like as the Sova, you have the majority of the info. I’m not sure how many Sova players on the other teams are genuinely feeding info back to their team. Or talking about what they could do in the round based off the information, where you could end, where you could fight. I feel that is important. Since that role does have the most information, you have to make sure that, if you aren’t feeding it, that you are making a call around it. There are good Sovas, like crashies for example, who do this. There are a lot of Sovas, though, who just focus on their crosshair. They just try to kill people and that won’t help them win the game.

Run It Back: NRG goes against Cloud9 Blue in the next round. You guys lost to them in the Challengers 2 Upper Bracket Final. Do you feel prepared for the rematch after their dominance over Team Envy?

eeiu: One hundred percent, for sure. The last time we played them, it was a seeding match at the end of the tournament. Them beating Envy is really good for us. We are match up dependent on Envy. We don’t really play too well against them in scrims, although we haven’t really played them in a non-seeding match yet. Cloud9 beating Envy is pretty good for us. We are happy to play Cloud9 and we’ll be confident going into it.

Run It Back: If NRG does make it to Iceland, what are your expectations? Is there anything you are looking forward to most?

eeiu: Of course I think we are the best team in the region and I’m not going to say my region isn’t the best in Valorant. I think our region has the best teams in the game. If we do make it to Iceland and we represent NA, we are hoping to win it all and not lose to any of the European teams.

Stay tuned to Run It Back for more coverage of the VCT, player interviews, and breaking news!