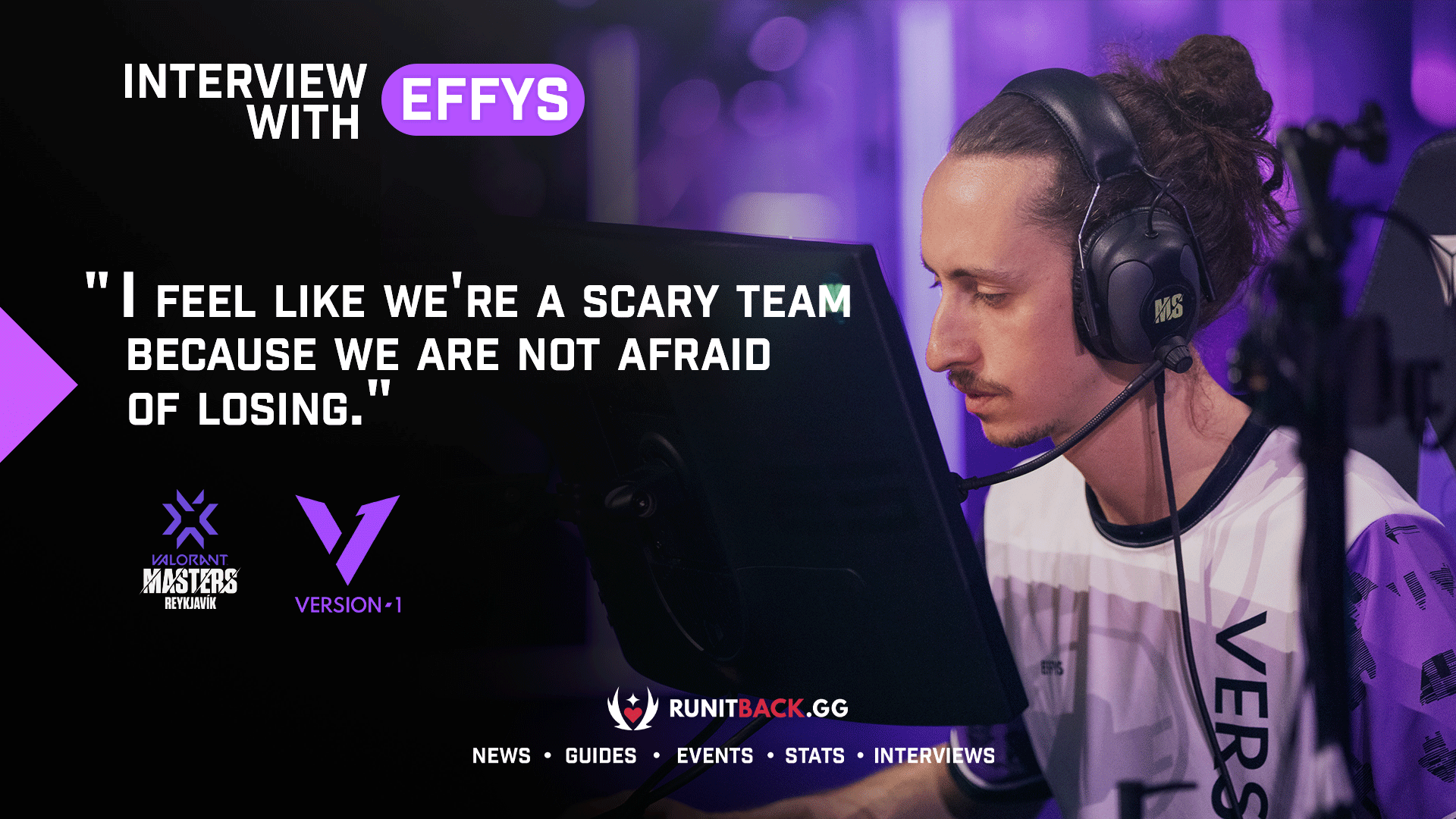 Masters Reykjavik is getting more intense by the day. Day 2 of the first international Valorant LAN event saw Version1 battle Team Liquid, and what a matchup that turned out to be. Following Version1’s victory after a dominant decider map, Haven, we got to have a chat with Loic “effys” Sauvageau. V1’s Sova main talked us through his map winning play on Ascent, the battle against Liquid, as well as his thoughts on the doubters back home.

RunItBack: I cannot start this interview without mentioning your round and map winning play on Ascent — the double Shock Dart to deny the Spike defusal. What was going through your head after that lineup worked and won the round and map for your team?

effys: Well, I think that the Shock Dart kill itself is what obviously people think is insane. But it’s really not the play I think. What really won us the round were my teammates on site buying enough time. There’s no way I win that round if my teammates die instantly. I mean, it was really easy to do. I’m a Sova main and I do those lineups all the time. It was actually a great call for the team to synchronise all of our ults together to make sure we buy enough time to make sure my Shock Darts are effective. Basically, as soon as my teammates killed people on site I knew the round was over because we play our post-plant util very well. I wasn’t even nervous, I just had to click Mouse 1.

Runitback: *laughs* As simple as that, yet so important right?

effys: *laughs* Yeah, but in the moment you don’t really think about it. I’m just happy my teammates killed people on site, that’s it.

Runitback: You guys are not only the first NA team to face an EU Valorant team, you are also the team that defeated an EU team. How does that feel?

effys: It feels amazing honestly. I’d be lying if I said otherwise. We went in there ready to win, ready to lose. We don’t care. We just play our game. I feel like we’re a scary team because we are not afraid of losing. We just run it and we just trust everyone’s calls on this team and that’s why we’re making it so far in everything right now. It’s just because we’re playing full confidence. Feels great honestly. *laughs*

Runitback: Coming back to Split. It was extremely tight as it went to triple overtime. Do you think it was more the anti-stratting or sheer aim that made the difference in those last couple of rounds?

effys: I think it came down to a lot of aim duels that we should have won that we lost. Perhaps because of the nerves that are just part of the game. I think we had them pretty well at 12:10. That was when they came A and we had a good read. We’re on site, I had my slow (Slow Orb), but L1NK hit a great shot on me and the round turned over about then.

And deep into OT, I think the fact that they have an actual team without a sub and they had good strategies, they just had a deeper playbook than ours and we couldn’t keep up with them in the end.

Runitback: Both you and ScreaM showed how to play a battle-Sage on that Split map. How do you make a Sage work that well when it comes to essentially fragging?

effys: I’m used to playing Sova, which is a very utility-heavy agent. The util on Sova is so important, and sometimes you’d die with the bow in your hand because you’re trying to do a lot for your team. The way ScreaM was playing [on Sage], he would dump all of his util and then aim duel. Because then you have no util, you just have the heal. So it’s kind of a budget Reyna, where you just take fights and you can heal yourself. That’s how we figured ScreaM is gonna play and that’s not always how I played, but I was feeling confident that game so I just dumped all my stuff and then fought after that.

Runitback: In the end, Version1 dominated in the decider, Haven. What was the key element in taking that map for yourselves?

effys: Imma be honest. Getting full Classic’d in Valorant is really rough. The momentum is huge, it’s only a twelve-round half. We were unhappy with the way we played the pistol round but we came in after that and we fully Classic’d them on the second round. I think that’s really hard to come back from if you’re not really experienced and maybe have a weaker mental little bit. It’s unforgivable. You give them all the ult points, guns, credits. Basically we won the game as soon as we full-eco’d them.

Runitback: After this win against Liquid, which team would you like to overcome next in Masters Reykjavik?

effys: I’m super happy with the bracket we have right now. First we played a team from Japan [Crazy Raccoon]. Then we played the best seed in Europe. And now we’re going to play against the best seed in Korea. I was looking forward playing an EU team. But now I’m looking forward to playing the Korean team most. They had a great game against Sharks and I want to face these guys honestly.

Runitback: It’s fair to say you’ve done NA proud tonight. Though, there have been a lot of doubters from your own region. Doubting that you guys have what it takes to push through in Masters Reykavik. Is there anything you’d want to tell those doubters?

effys: No, I’m not a rub-it-in-your-face type of guy. I understand the doubters. We came out of nowhere in Masters 2. At some point, once we start beating everyone, people are going to have to respect us. So I don’t have anything to say to these people. Our results speak for themselves and if they don’t wanna believe in us then that’s fine.

Runitback: Well, congratulations on the win tonight. Thank you for your time and we wish you all the best of luck moving forward at Masters Reykjavik in Valorant.

*Questions and answers may have been altered slightly for the sake of clarity or brevity.*