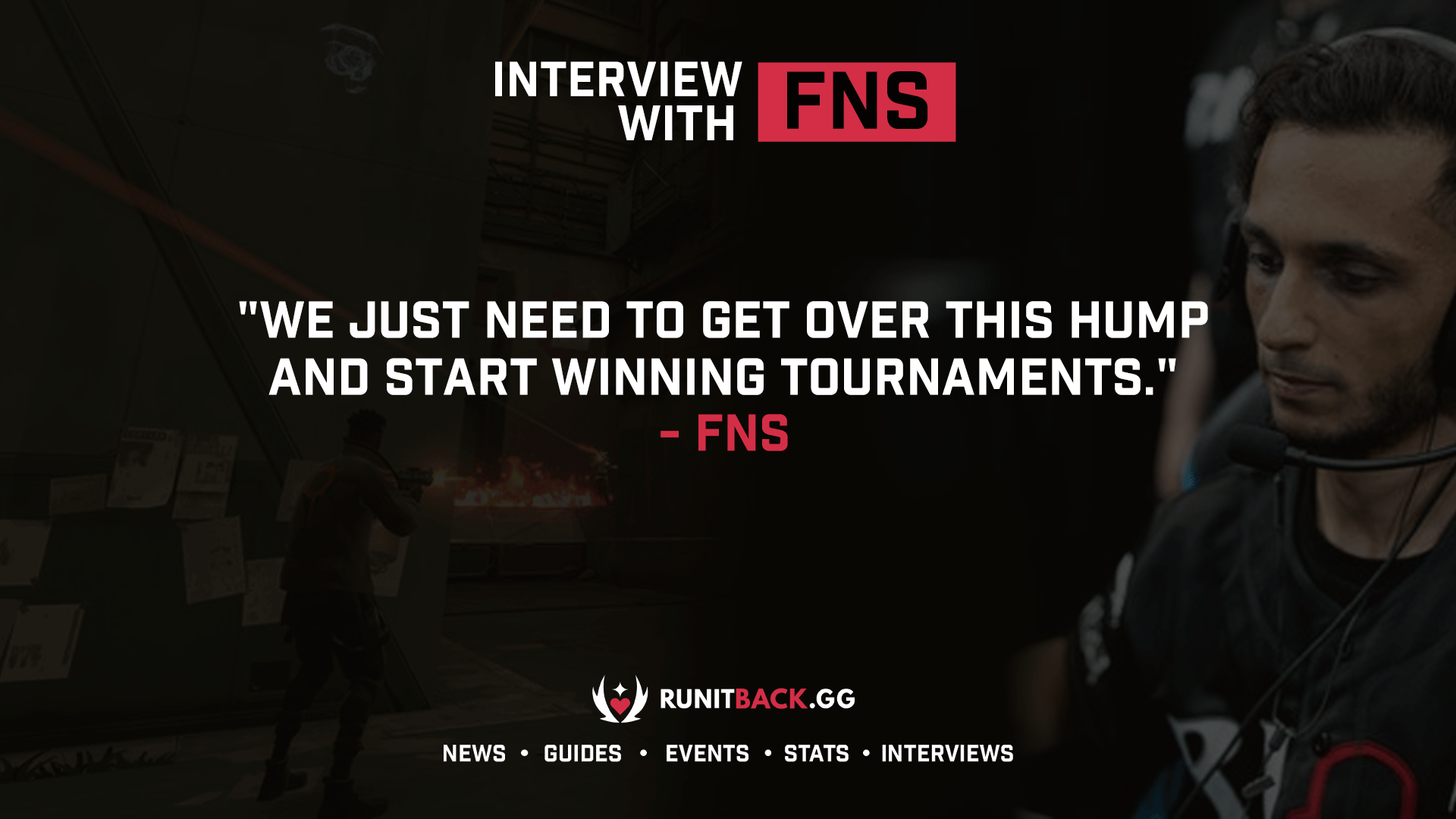 FNS discusses agent selection and what went wrong against Gen.G

As the VCT NA Stage 1 Masters tournament reaches its finale, several teams have already had their hopes and dreams slashed. In a very close battle with Gen.G Esports, Team Envy fell short. Following the rematch from the Quarterfinals, Run It Back had the opportunity to speak with Pujan “FNS” Mehta. He opened up about the game plan against Gen.G, what went wrong, how he determines which Sentinel to play, and what’s next for Team Envy,

FNS discusses agent selection and what went wrong against Gen.G

Run It Back: As the IGL (in-game leader), you come up with the game plans. In general, what percentage of the game plan goes off without a hitch compared to on the fly calls? And how did it play out against Gen.G?

FNS: Usually things go according to plan. Rarely it is without a hitch, though. Teams adapt pretty well. They see what we’re doing and they try to counter it. Then it’s just a battle of countering each other during the game. You constantly have to readapt and reinvent yourself during maps. We have an initial game plan going in, but we don’t always stick to it. It depends on my personal intuition or if someone else has a call they want to make based off of information they’ve gathered. That is why we are a really mid-round heavy team. We like to default and make those percentage calls. That’s how I’ve basically ran all of my teams in CS:GO. I think it’s the best way to play.

Run It Back: This series was incredibly close and, obviously, went a bit different than the first meeting in the Quarterfinals. Be as brief or as detailed as you’d like. What went wrong this time around?

FNS: We won both pistols on Haven. We had a good start in each half, but we threw away some really good rounds on CT side, or rather defense. That cost us overall. If we had won the 2v3 on A site, where I peeked Heaven and died, and lost the 2v2. If we had won that round, their money would have been screwed and we would have just ran with it. We would have 9:3‘d them that half. If you watch that Haven game, we should have won that half 9:3. Barring the dumb mistakes we were making, which we don’t normally make.

It is very uncharacteristic. On Bind, I feel we got anti-strated in Bathrooms a lot. They did a really good job of anti-ing our Bathroom control and hitting Short at the same time. They got an insane 8:0 lead so fast. It was really overwhelming. They definitely destroyed us on Bind, in my opinion, even though we had a little comeback on offense. We should have closed out Haven when we had the chance. We had so many man up advantages and post plants that went in our favor. We just threw them away. They had a lot of clutch moments.

Run It Back: Playing the Sentinel role, what drives you to play a certain agent on a certain map? What makes a map good for Cypher or good for Killjoy?

FNS: I look at it in terms of how it balances out on offense and defense. Cypher is a lot better on offense compared to Killjoy, but Killjoy has a better Ult. If you’re able to gather that Ult, you can get a couple of free rounds. On defense side, Killjoy is almost always better. She does a lot of damage and can lockdown a whole site. Cypher, because you have cages instead of mollies, you aren’t doing any real damage. People can just run through the cages. All you are doing is delaying.

Killjoy is definitely better on defense and Cypher is better on attack. I just look at the balance of it all. Am I able to play Killjoy on attack on this specific map? If I am able to make her viable on the attack side, then I play her. If I’m not able and, for example on Split, she’s not viable on the attack side, then I don’t. It completely depends on that.

Run It Back: Are there any specific moments, or times in defeat where you wish you had the other agent and their abilities at your disposal?

FNS: No. Losses rarely have to do with what agent you are playing. It is very rare, especially when you know you should’ve won. This game was ours to lose 100%, and we did. We had every chance to win and we let them win so many crucial rounds. It is super uncharacteristic of us, but they did a really good job, to credit them, capitalizing on the mistakes we made. Going forward, I don’t think I’ll lose to this team literally ever again, if I’m being honest with you, if they keep playing the way they’re playing.

I’m sure they’ll evolve, but we shouldn’t have lost today. We usually find this team pretty easy to play. I’m actually pretty sad that we lost, but at the same time, we still got points. It’s not that bad. It sucks that we came as, again, the number one seed and ended up with fourth place. The same thing happened at First Strike. We just need to get over this hump and start winning tournaments.

Run It Back: Team Envy are a strong team. You have been at the top before and are sure to bounce back. What is the squad looking to improve on most as the Valorant Champions Tour continues?

FNS: The small things, for sure. We have the fundamentals down for the most part. It comes down to the really tiny things. For example, the post plants that we’re messing up, key communication errors that we’re making. It is a bunch of tiny things that, at this level, cost you big rounds. You lose the game because of it. I think we played really well this tournament. Obviously, FaZe destroyed us, but at the end of the day, that’s a learning experience for us. We shouldn’t have lost this game, but we did.

We’re just going to regroup, watch these games, and figure out the small things we did wrong and fix it. Usually, we’re pretty good at fixing things and improving. Over the course of the entire time we’ve been together, with this five, we’ve stayed top four. We’re not going away any time soon. We’re still going to be a threat to everybody. This is super disappointing to us. Hopefully next Masters, we will have all of these things fixed.

*Answers and questions may have been slightly edited for fluidity and clarity.*

Stay tuned to Run It Back for further coverage of the Valorant Champions Tour!