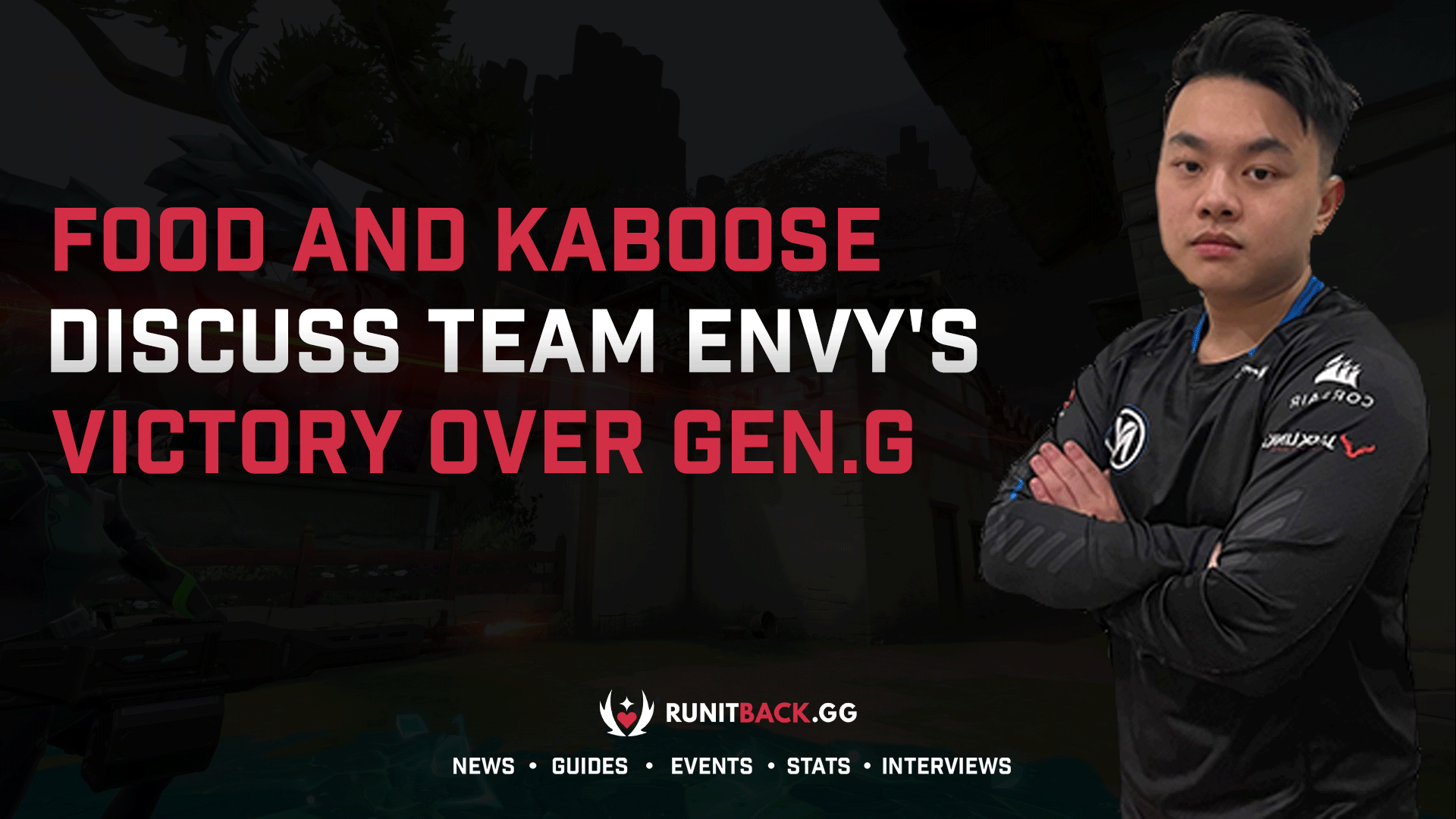 food and kaboose of Team Envy discuss victory over Gen.G

Day 1 of the North American Stage 1 Masters event did not disappoint. The Valorant Champions Tour is in full swing and the competition is truly beginning to heat up. A very close match up occurred in the Quarterfinals between Team Envy and Gen.G Esports. Following the series, Run It Back had the opportunity to interview both Victor “food” Wong and Jake “kaboose” McDonald of the victorious Team Envy squad.

Run It Back: If my information is correct, Team Envy hasn’t played an official against Gen.G since the Nerd Street Gamers First Strike qualifier back in October. How do you prepare for a team you haven’t faced in an event for a while? Is it any different than preparing for a team you may have played, say, a week ago?

food: A lot of the NA teams play each other in practice. We are kind of familiar with every team. Every team scrims each other, so being unfamiliar with them isn’t really a factor.

Run It Back: Starting the second half of Haven, some of the aggression shown by Gen.G seemed to rub off on you and your team. Was that always the attacking plan? Or did you want to match their energy?

food: We don’t really play that way. Every round is a different round. We didn’t play aggressive just because they did.

Run It Back: It is well-known that the job of a Duelist player is to create space, open up the sites, and take out the enemy team. Do you approach it any differently than that? And how does it feel when you are doing the job you’re meant to do?

food: It definitely feels good to get opening kills. But just because I’m a Duelist, doesn’t mean I’m always the one creating space and getting those kills. Sometimes I’m in a position to be more passive and lurk. Every player should be able to play more passive or aggressive depending on their position. I don’t believe in the whole, “You’re playing this role, so you must do this.”

Run It Back: Is there anyone you feed off of, no pun intended, on the team? Someone’s energy that just sends you to another level?

food: crashies is definitely my most obvious duo. Everyone on the team gets along really well, though. We’re all great friends. We all trust each other. Whenever anyone pops off, we’re all going wild.

Run It Back: Quickly touching on Icebox, what was the overall feeling among the team after dropping the map?

food: It wasn’t the end of the world. It is a best-of-three for a reason. We took their map pick. They took ours. The last was Bind. We’re really confident on Bind. We just had to reset and ignore that they beat us on Icebox. Just win the third.

Run It Back: Bind was an extremely tight map. What moment do you feel shifted the momentum to push Team Envy to victory?

food: The second round of Bind. I think I had a Frenzy and everyone else had a Classic. We somehow won the round. That definitely shifted the momentum in our favor.

Run It Back: Haven saw Gen.G play very aggressively. Was that something the team expected and how did you guys adjust to combat it?

kaboose: We know they like to be very proactive on both attack and defense. We knew we’d have to be on the lookout for anything. We would have to be solid on our defaults and make no mistake. Clear every angle and use the proper utility. On defense, it came down to our information gathering. When we see their heavy numbers towards A, we might get more aggressive at C or Garage to take some more map control. We needed to be proactive because they play really proactive. That is tough to play against, for sure.

Run It Back: Your team managed to bring it to a tie at the half. What kind of plays were called to close the gap and eventually bring the team to the finish line?

kaboose: To iron out our attack side, we wanted to exec (execute) off the rip and do a lot of splits. We’d dry run in practice and had it really set. Those basic strats worked well for us in order to have a good T side. Our defender side was really just, play our game, play our rotations, and making sure we’re staying proactive. That was the game plan.

Run It Back: Icebox went completely different. Do you feel that was more of Gen.G’s game plan working or Team Envy’s game plan not working?

kaboose: I think it was definitely a mix of both. They haven’t really played Icebox much. They usually either ban Split or Icebox, which are our two strongest maps statistically. They choose to ban Split and play Icebox, which isn’t really a map they play or have a lot of success on. Maybe we underestimated them knowing it is one of our better maps. I feel it was a mix of them playing it really well, for a team that doesn’t play it in officials, and us making a lot of mistakes.

Run It Back: When a huge lead like that is put up against you, how does that change the way you approach the rest of the map?

kaboose: No matter the score line, we’re always trying to win the game. We never thought for a minute that we were down and out at 10:2. I personally thought we were going to make a sick comeback. The vibes were really good, though. We don’t really get down. That’s a good aspect of the team.

Run It Back: Bind is such a great map for Raze. How does it feel to play her on arguably the best map for her?

kaboose: Raze is a really strong agent on Bind. I’ve been putting in a lot of work on the server. Coming up with plays, like set nades and where I should use my Ult. It’s been working out pretty well. It’s nice to see that the practice I’m doing is helping me in-game. To play Raze on a map like that, you have the freedom to takeover. No other agent can match you in terms of getting map control. I’m kind of just left on this island to gather some information and maybe find an opening kill. I really like that play style and I think it fits me really well on Bind.

Run It Back: Will there be any celebrating this first victory or is Team Envy looking straight to the next round?

*Questions and answers may have been slightly edited or altered for clarity and fluidity.*

Stay tuned to Run It Back for more coverage of the Valorant Champions Tour, including Masters tournament details and player interviews!