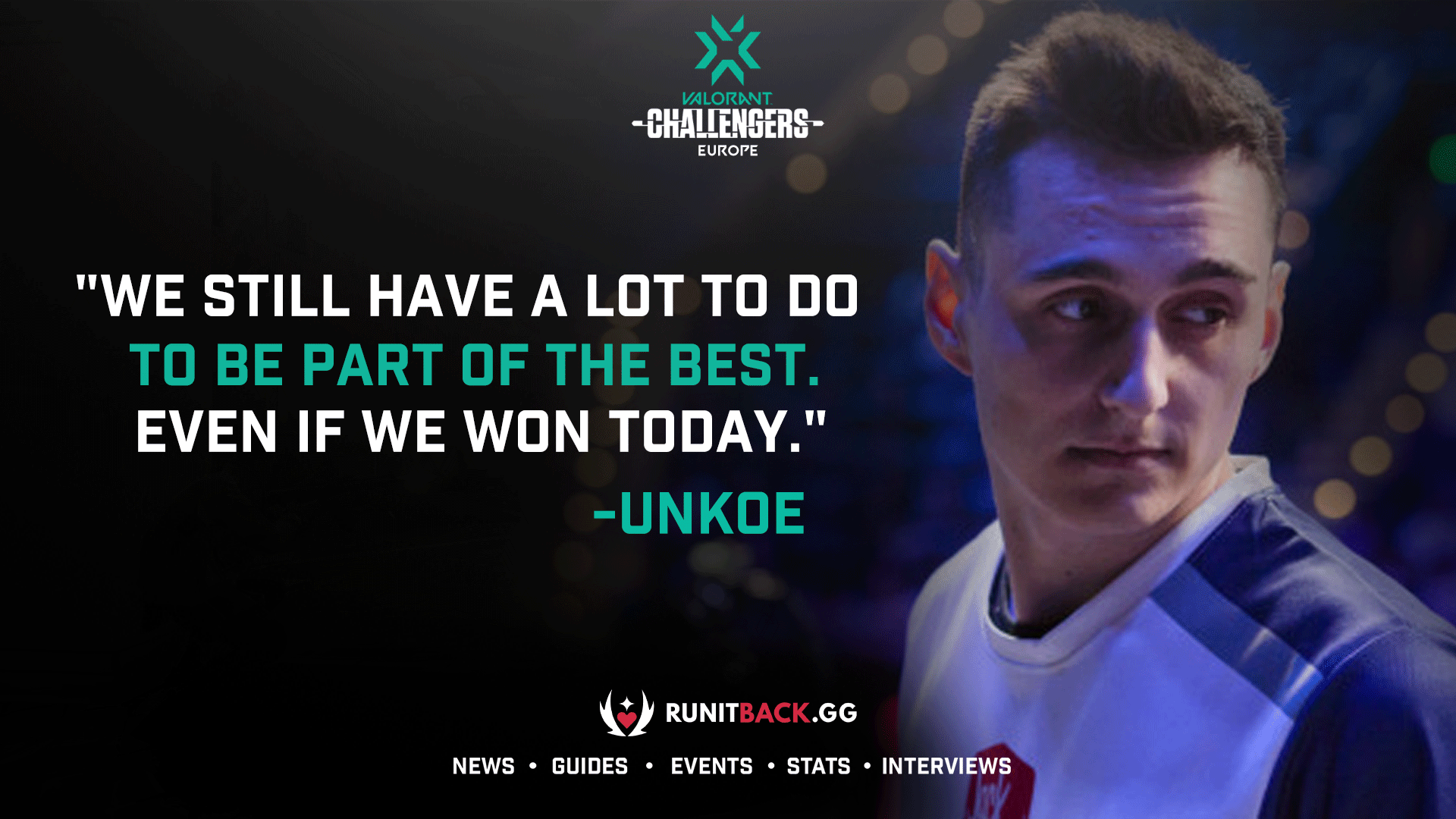 Monkey business’ uNKOE on victory over Guild, state of Viper, and future of the team

Following Monkey business defeating Guild Esports in the Challengers 1 main event in Europe of Valorant Champions Tour, we managed to get hold of Benjamin “uNKOE” Chevasson. Benjamin run us through his side’s victory, shared his thoughts on Viper, and gave us a little sneak peak at Monkey business’ future in Valorant.

RunItBack: Welcome Benjamin, thank you for your time. Congratulations on beating Guild Esports and becoming the second team to advance to Challengers 2. How do you feel coming off of that clean 2-0 win against Guild?

RunItBack: Obviously your side participated at Red Bull Home Ground. Monkey business made it through the qualifiers, an already big achievement. But then you were cut short by SUMN FC, now Fnatic. Did you learn anything from the matchup against SUMN back then. You looked really confident today, hence the question.

uNKOE: We were less confident against them [SUMN]. We played really bad, we did a lot of mistakes. But it’s also a really good team, they are not only good mechanically, strategy-wise they are really good. They’re really smart. Strategy in this game is very important. I don’t know if people know that but it’s probably 70% of the game. You need to have good strategies, it’s not just about aim like in ranked. So yeah, it’s a very smart team.

The thing with SUMN FC is that we never scrimmed against them. Never. Because most of the time, I think they scrim some tier 2 teams. I don’t think they are scrimming t1 teams. Just because of that it’s smart from them. At the same time I don’t know if I like it because I like playing against the best to learn a lot. But yeah it’s smart from them. In that way, when they play against us, we don’t really know what they’re going to do. We need to adapt fast on their strategies and what they’re doing, how they take space, their rotations. All that stuff is important.

RunItBack: I feel like I saw a different team play today comparing to that SUMN matchup. You took your opponents map pick, Ascent, and followed up with Icebox. I want to know a bit more about that second map. Obviously, your teammate, elllement had a great performance. However, what were some things that made your team win that Icebox match?

uNKOE: The thing is people need to understand that of course elllement is a really good player. Like, he’s probably one of the best players on the team when it comes to mechanics. Mechanically, he’s the best. But in this game you need everything.

On Icebox especially, we are playing around him [elllement]. The composition is made to play around him. For example, if you see me on Viper, it’s a really support character. The way we play it, how I play Viper, I’m most of the time taking the flanks, checking our flanks in defense, I mean I’m not going to say what we do exactly, but we play around elllement. Still, he’s insane because he’s doing his job, more than his job actually. So he’s actually insane *laughs*. Every time we played Icebox in the tournament, he’s just owning, he’s doing what we want him to do. But people need to know that it’s a teamwork game. Of course he’s owning, but it’s because of the team.

RunItBack: Great that you mentioned Viper. We saw you and Guild play Viper on Icebox. Riot already mentioned another buff coming for Viper. Do you think it’s necessary? If it is, what do you think could be buffed?

uNKOE: I think she doesn’t need another buff. The main reason why people are playing Viper on this map is because it’s a map where having 2 smokes with Omen or 3 with Brimstone wouldn’t be enough. There’s way too many angles on this map. At the same time they are playing Omen on NA [North America]. Because of Viper’s wall, you can just wall and cut off most of the angles. It’s really useful. That’s why I think most of the teams in Europe are playing Viper on some maps. To answer your question, I don’t think she needs a buff, she’s already strong. Though it depends on how you play her.

RunItBack: One last thing, there have been many rumors that an organization is going to pick you up…

RunItBack: *laughs* So…are you going to stay as Monkey business for a long time, or is that going to change soon?

uNKOE: So at the moment we are focusing on Monkey business. Of course, putting up those kinds of results helps with finding an organization. We are in talks with a lot of organizations now. Of course, OG is one of them, people know that. We have to admit it. It’s not like everyone hyped OG around it. Of course, some organizations are talking to us and we are trying to find the best option for us. The best family *laughs*.

RunItBack: Let’s be honest, the way that you guys have been playing, you are the second team to qualify for Challengers 2. You had a fantastic run so far. In my opinion, it’s just a matter of time before you get picked up.

uNKOE: Yeah, you’re right. I mean if we keep winning, if we keep having good results. I think we should be able to find something. Something that we like.

We wish Benjamin and his Monkey business side all the best in Valorant moving forward.