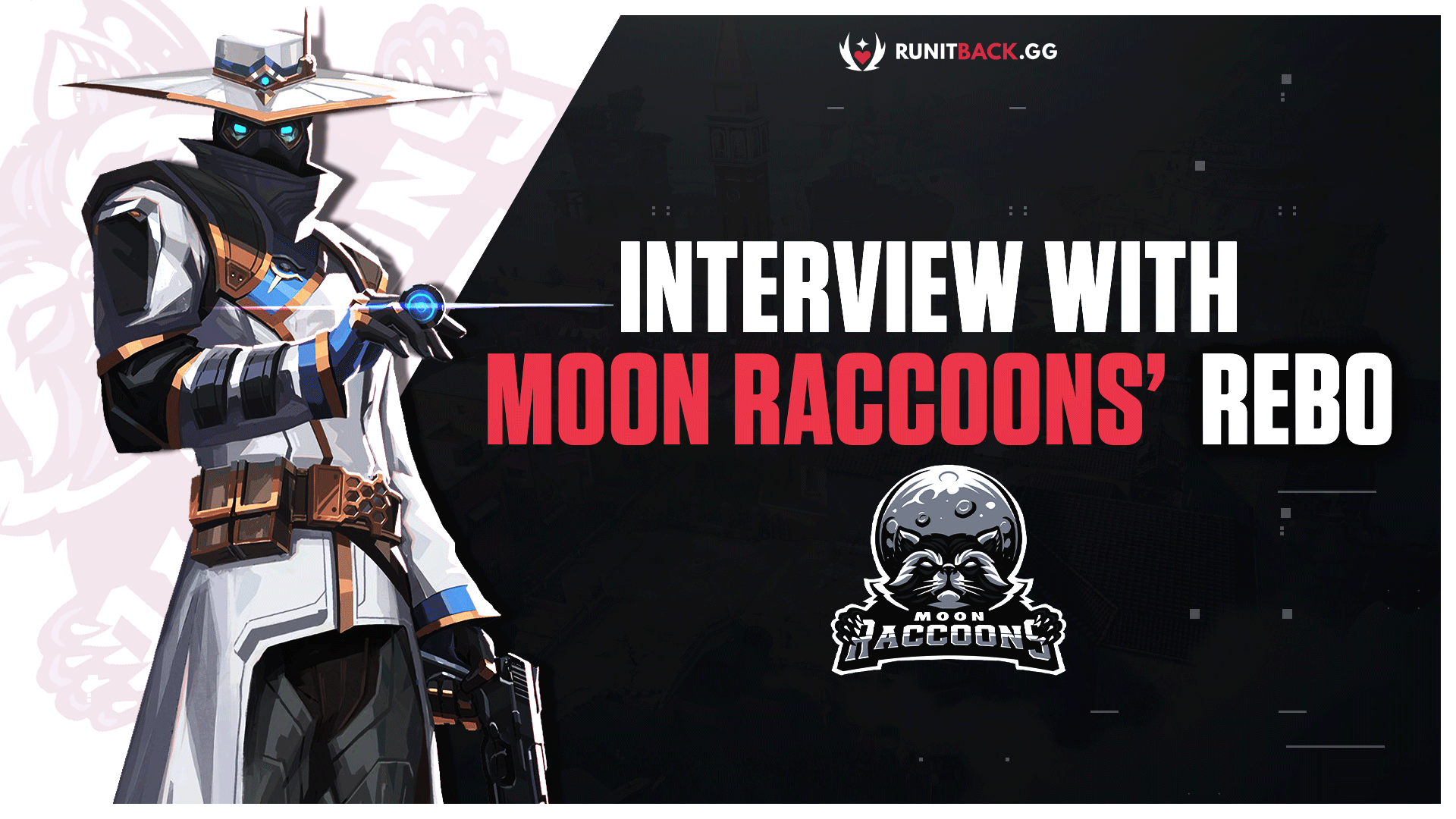 Moon Raccoons’ Rebo on the team name, its future in Valorant, and more in exclusive interview

Fans of North American Valorant are sure to have heard of the trash pandas from outer space. Moon Raccoons is a team that is blowing up on the scene as of late. The current roster consists of:

Most recently, the Moon Raccoons squad advanced to the UMG First Strike Closed Qualifier. They did so in the open qualifier by besting Time In, Mamba Mode Gaming, and FaZe Clan. Needless to say, they are on the rise heading into the Closed Qualifier.

Run It Back was lucky enough to have a chance to speak with the Captain of Moon Raccoons, Rebo, prior to the team qualifying for the UMG competition. Questions were asked. Answers were given. Strap in for a wild interview with the trashtronaut in-game leader.

Interview with Rebo of Moon Raccoons

Run It Back: First off, the question that is on everybody’s mind. Why Moon Raccoons?

Rebo: Why the hell not? Generations of people have wondered what to name people and teams. You know what we said? Fuck it. Moon Raccoons. Not only does it establish fear in the enemy, what is worse than being beat up by a trash panda? Whenever an opponent or a rivalry happens with us and they see a raccoon, you know what they think? They think of us. So, to answer the question, you’re not going to see a Sentinel going outside or a TSM, but a raccoon THAT’S ON THE MOON! That shit’s rad.

Run It Back: Without giving up all your secrets, what type of play style would you say the team has?

Rebo: Purely a style of “vibin’.” There is a huge emphasis in our team to work together but not to give a fuck going between each game. Really just put a big point on talking and creating opportunities through teammate pressure, abusing openings, and anti-timing windows to find advantages. More on the Attackers side, we use strategies and the same type of style, but for that we don’t want to go into any of our reads or we would be giving too much away. Purely our style is just to vibe and enjoy each others company.

Run It Back: What do you feel is the team’s biggest accomplishment thus far?

Rebo: I would say 100% the NSG x Renegades Invitational 10k. Not only when qualifying. We won the qualifier and beat Andbox in the finals from lower bracket. We then went into the tournament and beat Renegades 13-3 in their own sponsored tournament and Time In to make playoffs. Our true raccoon nature started to show at this point ruffing up the floorboards and foundation of the NA scene to what they had built.

Little did they know these critters were smart astronauts as well. After that I feel that is when our run really started and when people took us seriously cause beating Gen.G really showed we could beat any team. Then the next BO3’s vs. AndBox and Cloud9 were very close off of no practice. I’m dying to face those teams again and have a rematch with what we got now.

Run It Back: What future goals, short or long term, are on the Moon Raccoons’ agenda?

Rebo: Throughout the whole history of the Moon Raccoons saga, we have lived by one moto and one moto only. Don’t fucking care and play for fun. I’ve built and IGL’d for way too many teams that take themselves seriously or care way too much about winning. In the end this is a game and teams need to understand that when you put that pressure on yourself to perform it takes the strongest wills to make the toughest choices.

So going into every match whether it’s vs. a T1 or T3, team we take all of them the same. Have fun, don’t care about the result, and if you care about it get out of the server. We built this team on that principle. It has worked and we’ll keep that throughout the team’s existence.

Run It Back: Whether you’ve already faced them or not, what is one team you’d like Moon Raccoons to go up against?

Rebo: It has got to be Sentinels. Every other team we’ve either played or scrimmed, but never Sentinels. In the end, my personal goal is to sing to every top tier team before our match. Right now I still need Envy, TSM, and Sentinels, but all those other ones have been sung too and I have very much enjoyed that. Singing to Cloud9 was a very fun time because Shinobi told me to “please be quiet” and that is something I still hold and cherish to this day. Shinobi may not know this, but if you see this, with that small comment you have pushed me to not stop until every team hears this voice.

Run It Back: Do you have anything in general you’d like to add or perhaps something to say to the fans of Moon Raccoons?

Rebo: What is there to say? The entire team is completely blown away by the fans and what they create and support us with. It’s truly a blessing and from the bottom of my heart, I really mean this, you guys make it all worth it. We’re just some kids having fun taking T1 teams to the brink of being beat and every time the same fans are out there cheering.

For that and for everything you guys provide, I say thank you. Not only from me, but from the entire team. Lastly, we are looking for an organization to represent! Many of us still play on bad computers that lag and internet that stutters. That help will legitimately push us over the edge in my opinion.

*Answers may have been slightly altered for clarity.*

There you have it. Rebo has true passion for Valorant and for Moon Raccoons. This is a team that deserves the support of an organization. Keep an eye on the Moon Raccoons Twitter page for all the latest happenings regarding these fiesty garbage can dwellers from the stars above.

Stay tuned to Run It Back as well for the latest Valorant news, guides, and competitive event information. Then follow the Twitter and join the Discord for updates and community such as contests and giveaways!