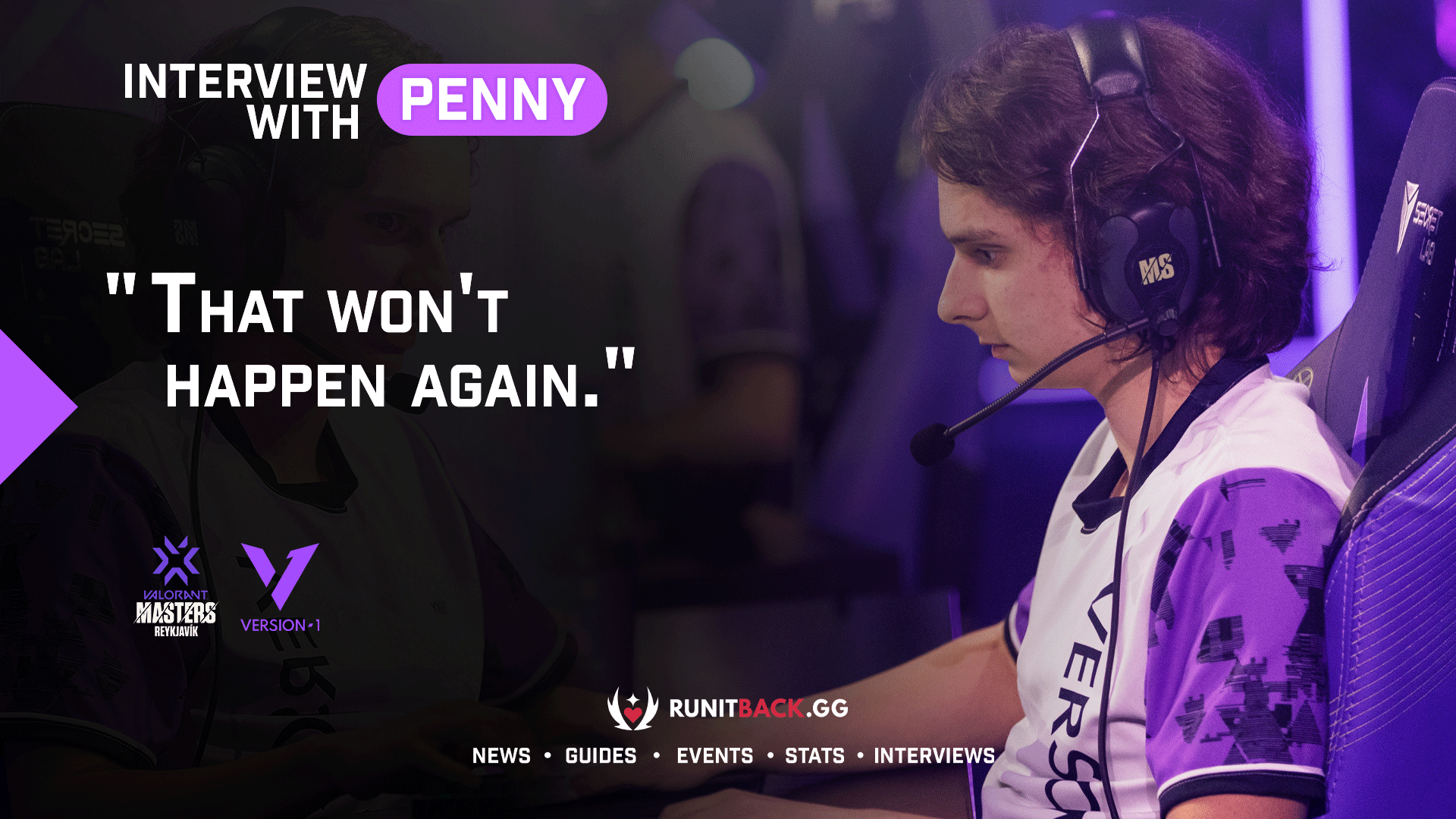 Day 4 of Masters Reykjavik showcased the first encounter between NA and KR. Version1 and NUTURN Gaming was better than anyone could have imagined. It was reminiscent of Version1 vs. Team Liquid. The second team to represent North America has brought the goods to every competitor they have faced thus far in Iceland. In a tight three-map series, NUTURN were able to close it out after two overtime maps in a row. That should take nothing away from the performance of V1 and their Jett player, Erik “penny” Penny. Run It Back was able to speak with penny after the hard fought battle with Korea’s finest team. He opened up about how Valorant feels on LAN, his performance in the match and role on the team, along with what exactly gave NUTURN the leg up in the end.

Run It Back: First and foremost, that was an amazing series. Version1 has been a part of the two most exciting series of the tournament so far. They’ve gone down to the wire and the team has performed so well thus far. I have to know, how does Valorant feel on LAN?

penny: There is definitely a difference. Holding angles is better than it is online. I feel like the running and shooting with the Phantom is also better on LAN.

Run It Back: At this point, it would be a crime to not add you to the best Jett player in the world conversation. The movement, the knives, the Operator, the rifle, it is all there. Do you even care about that or are you just here to do your job?

penny: Obviously, it is a compliment. I’ve been hearing it. It just sucks when you lose and you don’t play so good. I feel like this is the first series since I switched to Valorant where I didn’t live up to expectations I have for myself. I didn’t play so well. I mean, it is what it is.

Run It Back: Behind NA vs. EU, NA vs. KR was definitely the most anticipated region on region match up. What do think of the playstyle NUTURN Gaming brought to the series?

penny: I think they are good. They are a very good team. We knew what they were going to do in the moment, but just couldn’t stop them. I don’t know what it was. I think we were also playing well that game. All of them were hitting their shots, but on top of that, we were misplaying a lot, too.

Run It Back: Now, I want to talk about Version1’s post-plant strategies. We see effys and jammyz rain down utility onto the Spike. I assume your role is to just stay alive, buy time, and take out who you can. What can you tell us about the post-plant set ups and your job during them?

penny: My job is to get into the site and literally, do exactly what you said. I have to stay alive as long as possible. So the mollies and Snakebites can actually work. So we can wind down the clock and win, not even by killing them, but win with the bomb timer.

Run It Back: After taking Haven so dominantly, it seemed like NUTURN had your number on Ascent. What are your overall thoughts on how that map played out for you and Version1?

penny: We definitely got in our own heads when we were up like 6:2, 7:2, something like that. We started throwing away these silly rounds. Silly rounds. At that point, I don’t know if the stream caught it, but there was some weird stuff happening to me that game, too. It kind of threw me off. I was missing some shots. I didn’t half the bomb properly. I thought I did, but I guess I got off too soon. I think it was definitely us playing into our own heads and giving it to them almost.

Run It Back: Split was another close map. Both teams had some wild clutches and multikills, but utlimately NUTURN were able to take it. What do you think the deciding factor was for them to be victorious?

penny: What made them the better team on Split was their Ult use. They had a lot of impactful Raze Ults, Killjoy Ults, and Breach Ults. Those helped them win rounds pretty easily. They used them more efficiently than we did.

Run It Back: Well, congratulations on making it this far in Masters Reykjavik and good luck in the rest of the tournament. Any final thoughts or comments as Version1 moves to the Lower Bracket?

penny: That’s won’t happen again. Now, that we’ve lost that game, the pressure is totally off. That was a pretty big game for us. But now that we’ve lost a game, I don’t think we’re going to care anymore. We are just going to run it out, see what happens, and try to win.

*Answers may have been edited or altered for clarity.*

Thank you to penny for the interview and best of luck to Version1 for the remainder of Masters Reykjavik.

For more Masters coverage and player interviews, stay tuned to Run It Back!