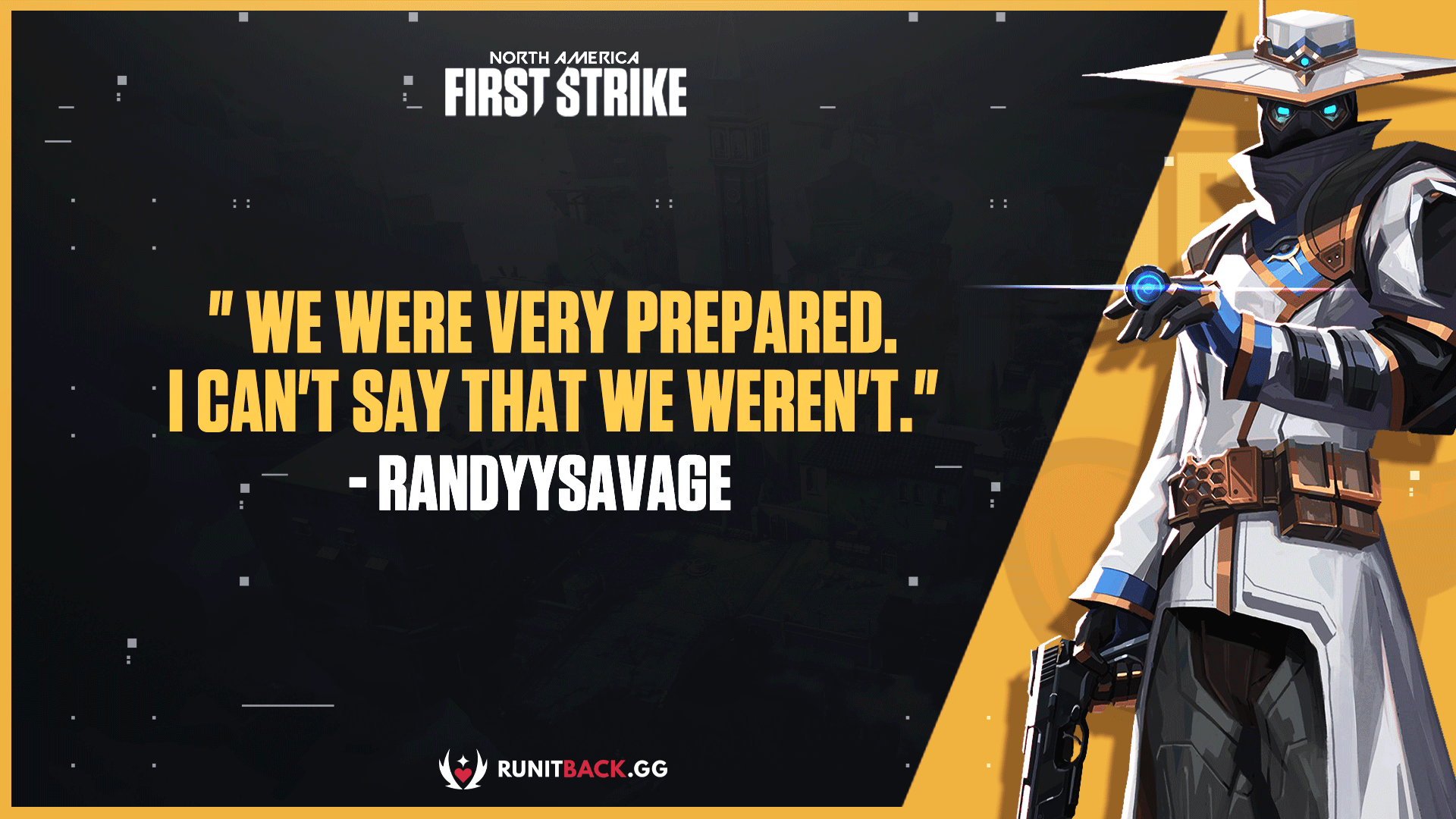 randyySavage talks preparedness and the origin of his name

Wrapping up Run It Back’s coverage of Day 1 of the North American First Strike event is an interview with Renegades player Devon “randyySavage” Bréard. After falling quite hard to TSM, the Renegades players were in surprisingly good moods. All of them are looking forward to the future and hoping to take this as a learning opportunity to get better as a team. Speaking with randyySavage was loads of fun as he touched upon the origin of his name, agent selection, and more.

Run It Back: Are you a big Macho Man fan? Is that where the name comes from?

randyySavage: You know, actually, I was given this name by the public. It started in Counter-Strike. People would call me “randy” for “random,” because I would just dominate them. Then I switched my name to “randyy.” After “randyy” for a few months, people started to call me randyySavage when I would dominate pugs. So, I changed my name to randyySavage. I had no idea who the hell the wrestler was and I had no idea who SandyRavage was. I’m not sure if you know who he is.

Run It Back: SandyRavage is an old school reference!

randyySavage: Yeah, a lot of people thought I was trying to impersonate him or trying to be him. No association with him. No idea who he was until I had this name for a solid year or so.

randyySavage: We’ve been scrimming it all week. We were very prepared. I can’t say we weren’t. We weren’t prepared for how they were prepared for us, though. If that makes sense. We took a tac pause at some point. We talked about it. We knew exactly what they were going to do, but we just couldn’t counter it properly. There are least four, if not five rounds on the attack side that should have been ours. We got the bomb down and just didn’t play the post plant properly. We like to, what we call, plant strat on Ascent. We plant at the green double box.

Then we go back A Main and spam through the smoke, whether it’s their smoke to cut off A Main or our own smoke. When we do that, there are little things it comes down to. If you’re dead, ping bomb so we know where to shoot. I don’t know if it was the nerves or what, but little things like that weren’t coming in. That cost us four or five rounds on the attack side. That was huge. We got dominated 13:1, but we’ve still got our chins up. We’re proud of just qualifying for this big Major. It was huge for us, beating C9 [Cloud9] for the spot. We’re really proud of how far we came through.

Run It Back: Your team won more rounds on Bind than Ascent, of course. Do you feel that was a better performance or does that even matter considering the overall outcome?

randyySavage: I don’t think we performed any better on Bind. How do I know this? Bind in particular was a curveball for us. They’ve been banning Bind since beta. We weren’t expecting to play Bind. When they picked it, we were surprised, yet kind of happy. We thought that yjey weren’t going to be as prepared, but they came to play. They showed us they were on one today. Wardell wasn’t missing a shot. Subroza, being the robot he is, was an animal. They all showed up and came to play. They showed us that in the server.

Run It Back: On Ascent, you played Sova. On Bind, you played Breach. What makes those the best agents for the maps you played them on? Do you feel things may have gone differently if you played any other agent?

randyySavage: On Ascent, I’m very comfortable on Sova. I used to play Cypher, but after the patch, we thought maybe having no Sentinel was the play. I don’t think playing Sova on Ascent was a problem. On Bind, I do think that playing Breach, not having as much play time on him as Sova, Cypher, Killjoy, or anyone else really, it showed that I was a little rough and rusty around the edges. Maybe picking Cypher on Bind would have gotten us a few more rounds? Who knows? They played out of their minds. Me on Bind was probably the most uncomfortable switch. It was the most recent one as well with Skye coming out. Yeah, I’d say maybe on Bind, Breach wasn’t it. That’ll just come back to us watching the VODs, seeing what went well, what went wrong, and why they came out on top in so many of the rounds. We’ll discuss from there. It’s back to the drawing board.

Run It Back: When it comes to the future for Renegades, are you looking forward to the Champions Tour? Or is this loss something that the team will be looking at and reviewing for a long time? Possibly even dwelling on it?

randyySavage: I wouldn’t say we are going to dwell on it. We are definitely going to look back on it and study it hard. TSM is one of the top three teams in North America right now. Anything we can take away from them to help improve us and help work on strategies is definitely going to help us for future events. Regarding the Champions Tour, we are looking forward to it. None of the public though Renegades would make it to First Strike. We were one of the biggest underdogs who made it into this major event. We’re very proud with how we played and how we qualified for the event. We aren’t too happy with how we played today, but none of us are demoralized. We’re all still happy and looking forward to future events where we can perform out of our minds.

Run It Back is very appreciative of randyySavage for taking the time to participate in this interview.