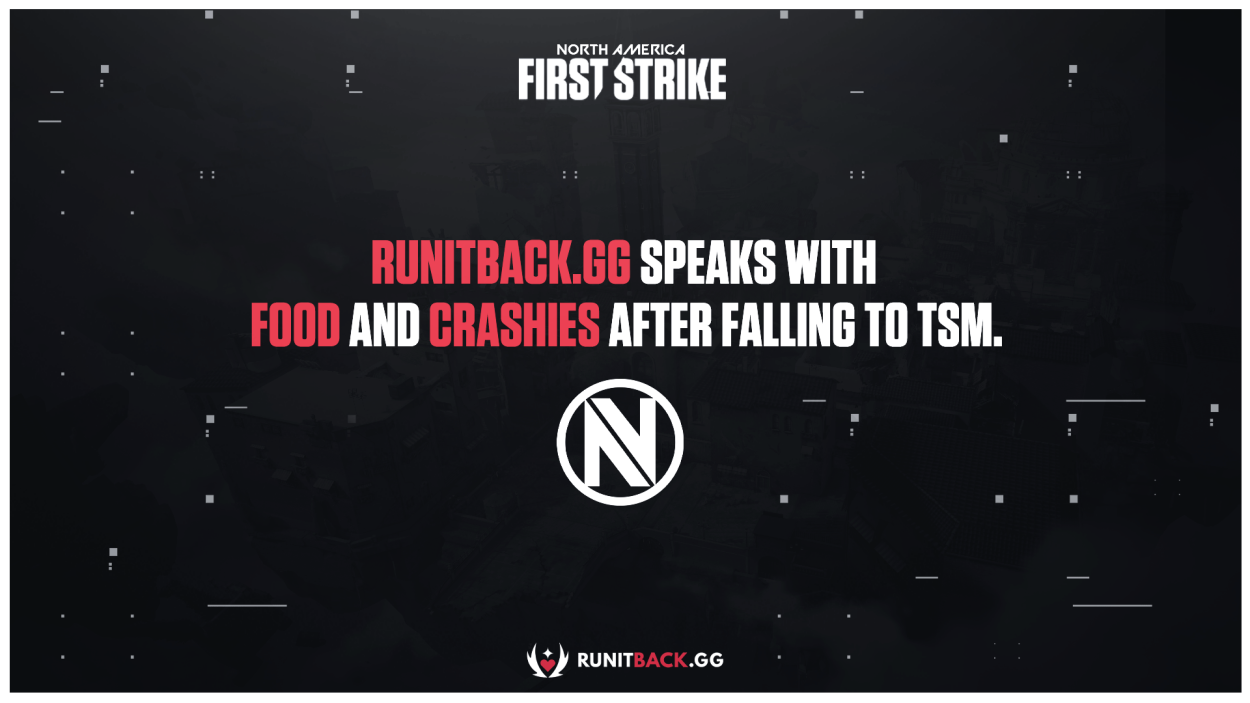 The Semifinals of the North American First Strike tournament are complete. 100 Thieves defeated Sentinels to advance and prior to that, Team SoloMid knocked Team Envy out of the event. Run It Back was previously able to hear from Pujan “FNS” Mehta and Jake “kaboose” McDonald after a strong win against Immortals in the Quarterfinals. This time around, the circumstances were different after a tough loss. Both Austin “crashies” Roberts and Victor “food” Wong were available to comment on what went wrong and what’s next for Team Envy.

Run It Back: Obviously things didn’t turn out the way you would have hoped. What kind of emotions are you feeling right now?

crashies: I’m disappointed. All five of us know that we didn’t play to the highest level we can. I think we’re all a bit disappointed. Me personally, I’m excited for 2021, though. We have a really good roster going into it. There are a bunch of cool tournaments coming up in 2021. We’re just going to go back to practising and come out stronger.

Run It Back: Going into the series, did it matter that it was TSM? Or were just ready to take on whoever the other team might have been?

crashies: We don’t really think about who we play. We’re just ready to take on whoever. It doesn’t really matter. We know all of the guys on TSM. We’re friends with them. That makes it even better.

Run It Back: When it comes to Split, the first couple of rounds went incredibly quick in your favor. What do you feel happened that caused things to slow down and allow TSM to take things on the defensive side?

crashies: We lost a lot of key post plants, like 3v3’s, and that was our main problem. Post plants. We couldn’t hold a single post plant. I think that was our biggest issue honestly. Our comms were there. We were missing kills as well. That could be it. It was just a bad day.

Run It Back: Team Envy is typically known as a defensive monster on Split. Do you think the led that TSM had made you approach things differently for your defensive setup?

crashies: I don’t think so. We don’t really stray away from our game plan unless something severely tragic happens. Even when they have a bigger lead, everyone is pretty calm on the team and thinks we can come back into it.

Run It Back: You mentioned you are looking forward to 2021. What does the best 2021 for Team Envy look like to you?

Run It Back: In your words, what happened? Did anything go wrong or was it just a clean loss to TSM?

food: We definitely stuck to our game plan. We got into a lot of post plant situations and other situations that could have easily gone our way. They didn’t, obviously. That was really key when it came to economy management and momentum. They won a lot of those key rounds and ran away with it.

food: I definitely felt like I wasn’t able to get things going. I didn’t feel like they were specifically targeting me. They were seeing what they could get on their attack side and were just able to get a lot.

Run It Back: After giving up Ascent, did that affect the team moving onto Split? Or did you just take it on the chin, ready to move on to the next map?

food: We definitely brushed it off and just focused on Split. We stuck to our game plan, but they played really well and really aggressively. They caught a lot of timings.

Run It Back: That leads into my next question. They began to play very aggressively on Split. Was that expected or did it catch you off guard?

Run It Back: Though it wasn’t the outcome you were hoping for, a lot of people would consider making it to this point in First Strike a solid showing to end 2020. What do you expect for Team Envy’s future?

food: Personally, this loss is very upsetting to me. I want to do better than top 4. I feel like this loss kind of hurts. Especially with how we’re feeling about it. Looking forward, we can definitely expect good things, but right now my mind is on this only.

Thank you to crashies and food for the opportunity to get their thoughts on the Semifinals contest. It was clear that both players were dejected after the loss to TSM. It’s great to hear that they are looking forward to a successful 2021, though.

Stay tuned to Run It Back as we wrap up our interviews and First Strike coverage!