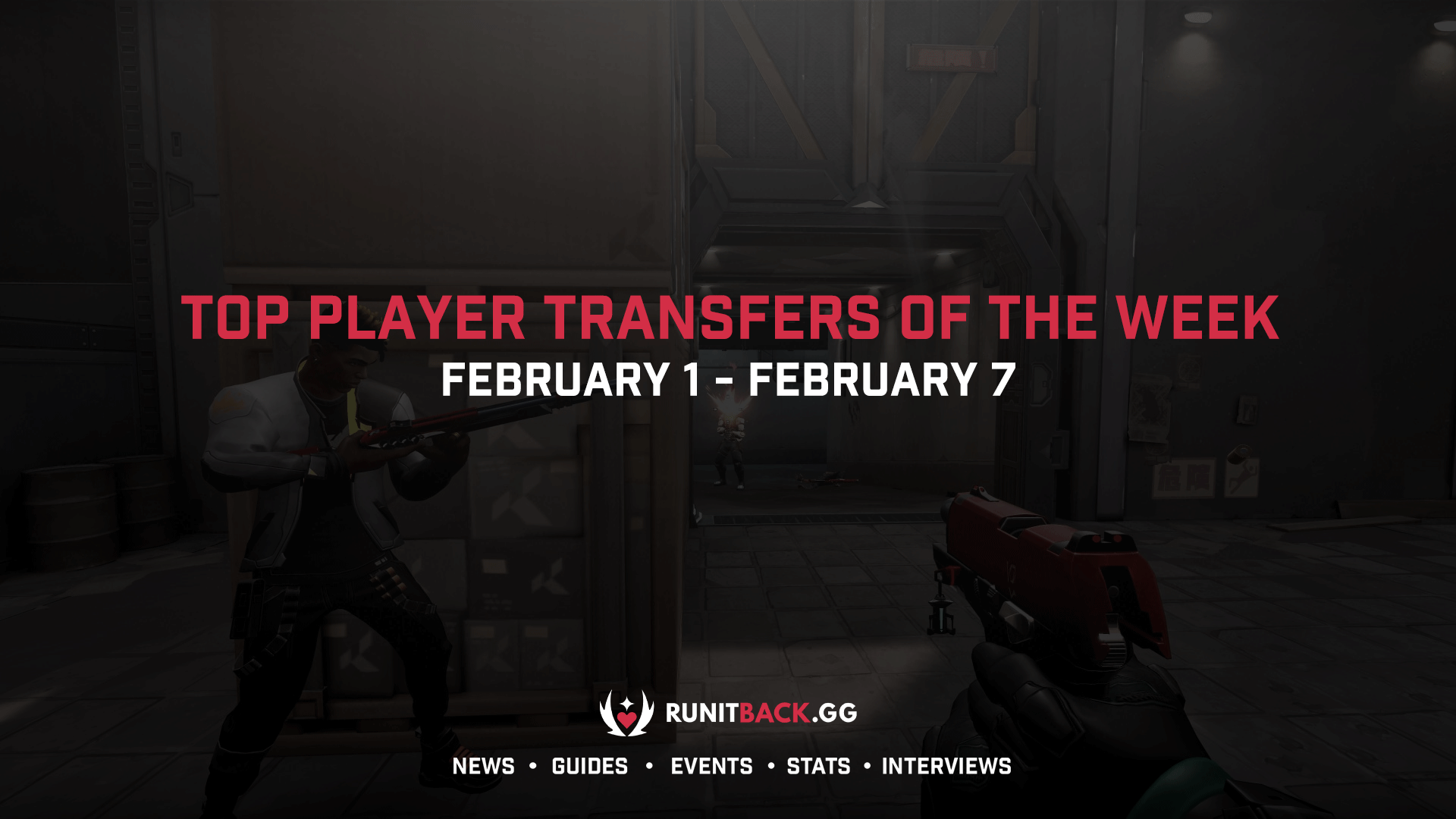 Welcome to the thirteenth edition of Run it Back’s Top Valorant Player Transfers of the Week! This week was full of moves so buckle down as get to reading! Make sure to check out our last installment to stay updated! Here are the top Valorant player transfers for the week of February 1 – February 7.

Ex-CS:GO coach, analyst, and player Matthew “mCe” Elmore joined Gen.G this week as the team’s new coach. This is their first coach since the team picked up their Valorant roster.

Renegades parted ways with Stephen “Berghy” Bergh. He was one of the team’s founding players back in July of last year.

Rise signed former eUnited player Antonio “Showtime” Angotti after they benched Adam “Ange” Milian just a few days prior and are back to a full roster.

Wildcard had a pretty wild January after letting go three of their five players. To make up for that deficit, they signed the so-called “Classic King” John “ninim” Slayo and Travis “wizard” Richardson.

Fnatic entered the Valorant world this week by signing the all-star roster of SUMN FC. Read our article to find out all the deets!

After dropping their first roster at the end of January, Czech esports organization Entropiq signed a new roster headlined by Damien “HyP” Souville.

David Denis, a coach who has worked for many teams across League of Legends and CS:GO, joined T1 as their coach this week. He was most recently a performance coach for TSM’s Valorant squad.

French organization Team Vitality were among the many teams this week to enter the Valorant scene. They signed the orgless team FrenzyGoKill, who placed 5th-8th at First Strike Europe and Red Bull Home Ground.

As if T1’s squad didn’t already have enough ex-CS:GO pros in it, Timothy “autimatic” Ta joined this week to bring their player count to six.

After losing Tolga “bacyx” Bacak at the end of January, Sangal quickly recuperated their loss by signing Cihan “Unity” Seferoğlu.

Nisay Kicked from Beşiktaş for Cheating

Yasin “Nisay” Gök was kicked from the Turkish team Beşiktaş Esports after he was caught cheating in a ranked match. Read my article about it to find out how he was caught and what his future holds.

The absolutely legendary ex-CS:GO pro and analyst Sean “sgares” Gares joined Gen.G Esports as a streamer. Check out my write-up on that move as well!

Talking about teams with six players, Michael “poiz” Possis joined Cloud9 Blue this week to bring their player count up to six.

The Portuguese esports organization SAW signed the roster of Warriors as their first Valorant team.

Thanks for tuning in for our thirteenth edition of Valorant Top Player Transfers of the Week. Is there a transfer we missed that you think we should have included? Let us know and tune in next Sunday for our next Top Player Transfers of the Week! As usual, remember to follow us at Run it Back and join our Discord for all your latest news, extensive guides, and exclusive interviews in the world of Valorant.