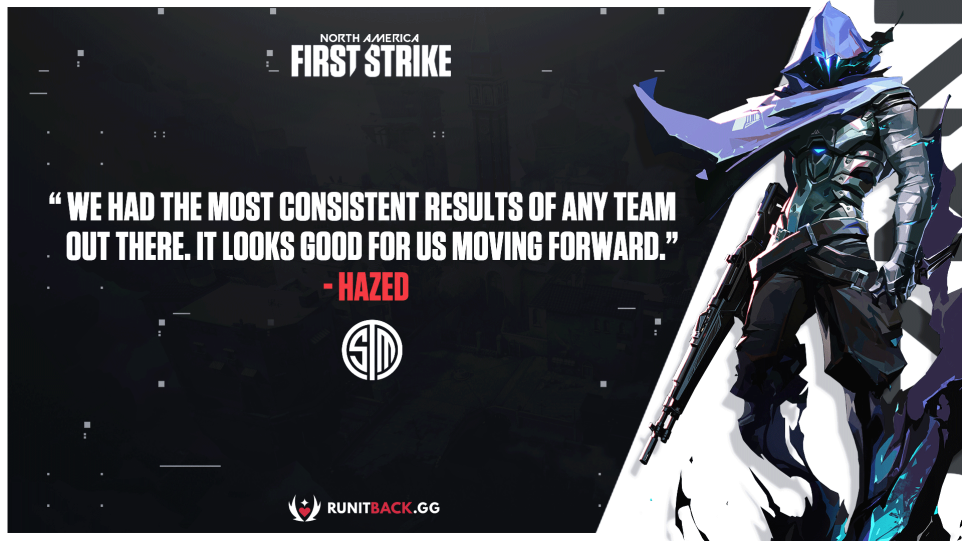 Team SoloMid were primed to take first place during the North American First Strike tournament. 100 Thieves had other plans, however. They took the victory 3:1 in the best-of-five series. After the finale, Run It Back spoke with James “hazed” Cobb. He was in good spirits after the loss. Read ahead to see what he had to saw regarding the series, how TSM will bounce back, and what he thinks of potential international competition in 2021.

Run It Back: During overtime on Split, it was the very last second when you stopped nitr0 from defusing and ending the game. At the time, did you know how close he was to defusing?

hazed: Yeah…I’m not literally counting it in my head, but I have this feeling of how far along it could be. I knew as soon as I teleported down and heard him tap it. I started walking up thinking he was going to fake. He dinked me earlier. I was at 5 HP and he knew, so he probably thought I was too scared to peek. Luckily, I had the right read on the situation.

Run It Back: Along with that play, there were big plays made throughout the game. After the team has pulled off those kind of plays and still comes up short, what does that do to the mood of the team?

hazed: To be honest, we weren’t too down. It’s a best of five. It’s one map at a time. It’s not over until you lose three. Yeah, we lost Split. It was a close game we probably should’ve won. We dropped the ball, for sure. Ultimately, it’s just one map. Who cares. They’ve got to win three. We’ve got to win three. We just move on.

Run It Back: Looking at the round count, the maps TSM lost were all fairly close. What are some changes that would have made those maps go your way?

hazed: Pistols for sure. We won only one out of eight in the series. That’s just hard to recover from. We won a majority of our gun rounds. That’s good. That means we’re doing things right strategically. I think we got eco’d a bunch. I don’t know how many times. We’ve got to fix our pistols and stop getting eco’d. I mean, those two things…that’s a completely different series. That could have easily been a 3:0.

Run It Back: Of course with new agents and new maps coming to Valorant, TSM is bound to look at different compositions. My question is, after the loss to 100 Thieves, do you feel there is a need to look at the agent composition right now?

Run It Back: What are some things you are looking forward to most in 2021 and for the future of TSM?

hazed: 2021 is shaping up to be crazy. I’m looking forward to the new league. It sucks to end the year in second place, but when you really think about it. In arguably the toughest region, we got second place. We had the most consistent results of any team out there. It looks good for us moving forward. Hopefully we can go from second to first.

Run It Back: In regards to the different regions. Are there any other regions out there that you are just dying to get a piece of?

hazed: Everyone wants to see us play against G2 and the EU region. I particularly like the Korean region. I like watching Vision Strikers. It’s a very top heavy region. Vision Strikers just owns everyone over there. I like their approach to the game and the strategies they create. It’s something that we look at and say, “This is good. It’s something we should implement into our gameplay.” That’s not something we do for every team. We think Vision Strikers are a very good team. They are someone who we think are trying to do what we do. Establish their own meta. They’re not just following what we do in NA. They are doing their own thing. We think that’s really good. I’d say Vision Strikers, for sure.

Thank you to hazed for the interview.

Keep your eyes on Run It Back as we wrap up our First Strike coverage!