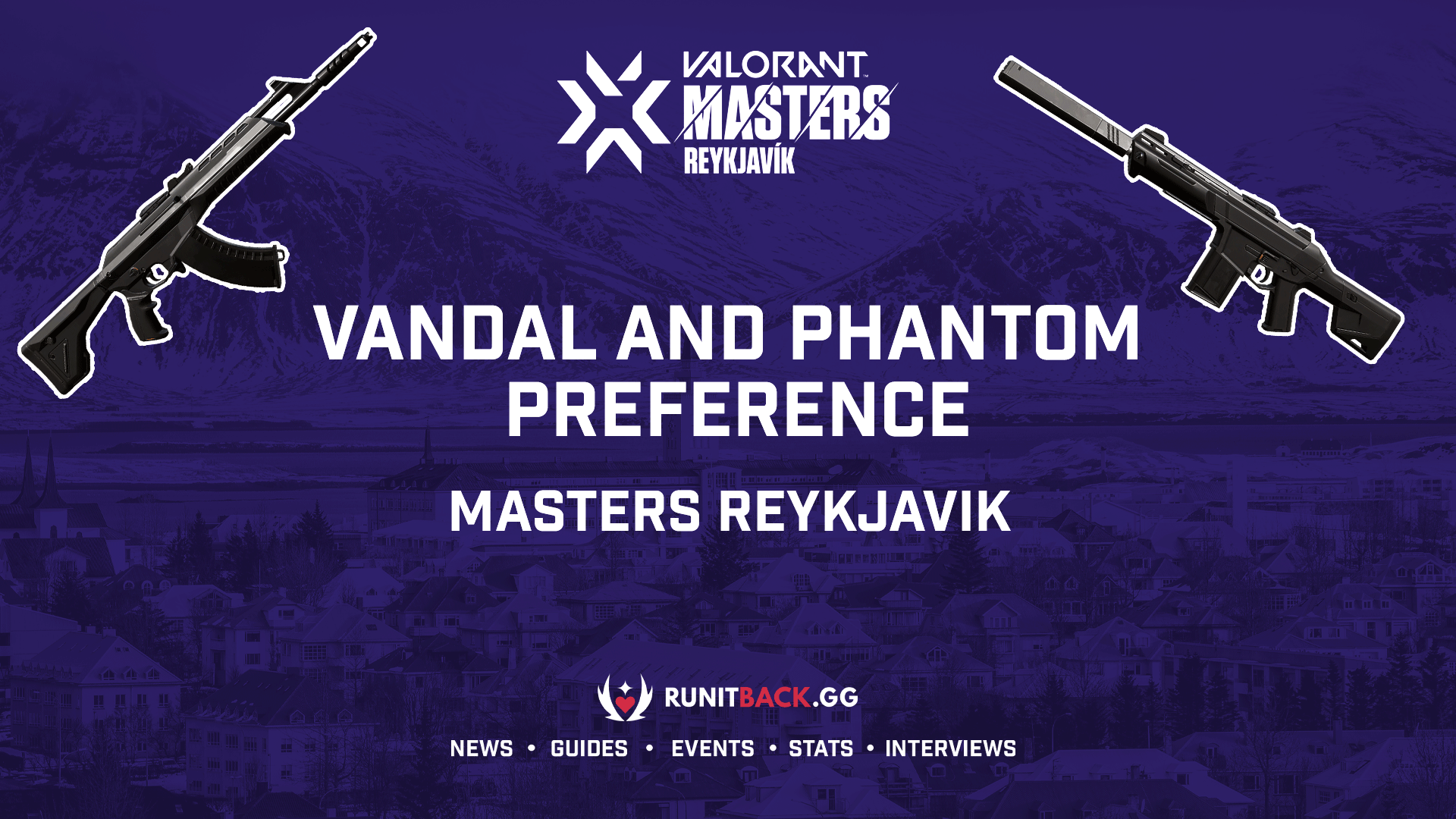 Vandal and Phantom preference of each player at Masters Reykjavik

The age old debate on whether the Phantom or Vandal is the superior rifle will probably never end. However, instead of debating on which is the better rifle, we can instead show the preference of each professional player that was present VCT Masters Reykjavik.

Sam “Flameserpent” Rosenberg has made a nifty graphic illustrating where the players lie on a spectrum of either the Vandal or the Phantom. The data was gathered by utilizing Runitback’s very own analytical platform.

The following graphic showcases each player that was present at Masters Reykjavik. The color of each circle signifies the player’s respective team. Below are the teams, their corresponding colors, and their players:

The graph is rather simple to read. If a player finds themselves on the far right, they almost always used the Phantom. Conversely, if they are on the far left, they swore by the Vandal rifle. Players more in the middle did not have a favorite and ended up mixing it up between the Phantom and Vandal at Masters Reykjavik.

With many teams opting to run a rather new meta of Astra and Viper, the Phantom rifle has become a fantastic choice. This is because of the Phantom’s untraceable rounds, making spamming through smokes and walls an effective strategy.

On the very right of the spectrum, sutecas and Saadhak always opted for the Phantom from the Vikings. Their teammate, Sacy, was right behind them in that regard. However, frz had only a slight preference for the Phantom while gtnziN was more of a fan of the Vandal.

Most of the players of the winners of Masters Reykjavik have also leaned more towards the Phantom. Sentinels’ ShahZaM, dapr, and somewhat zombs, saw a heavier reliance on the Phantom rather than the Vandal. TenZ was the only exception in the team, as he was more fond of the Vandal (though only just slightly).

NUTURN’s peri, solo, and allow turned out to be heavy Phantom users too.

The only team that saw all of their players opt more for the Phantom was the NA team Version1. Zellsis and effys especially, swore by the Phantom throughout the tourney. penny emerged as a bit behind in terms of Phantom usage but still found himself on the right side of the spectrum. Vanity and jammyz are more towards the middle of the graph, with a slight preference for the right side that points towards more usage of the Phantom rifle.

Vandal’s one-shot headshot potential at any range is the one thing that the weapon excels at over the Phantom. Despite the slower fire rate, traceable bullets, as well as slightly lower magazine size, for some players that is more than enough to justify picking up the louder Vandal rifle.

Sharks players are the most prominent on the left side of the graph. All of the players found themselves to be running the Vandal predominantly. Despite prozin somewhat leaning towards the middle, he still used the Vandal more frequently over the Phantom.

The Thai team, X10 Esports (light grey), were also mostly fond of the Vandal. Despite not as heavily reliant on the Vandal as the Brazilian Sharks players, the X10 squad were happier to pick it up almost as prominently.

NUTURN’s Lakia and suggest are the two players in the team that preferred the Vandal in their team despite their teammates being more Phantom-reliant.

The runners-up of the tournament, Fnatic, saw most of the team opt for the Vandal at the tournament. Boaster, Mistic, and Derke all found themselves more on the left side of the spectrum. Albeit, Doma and MAGNUM being just slightly more in favor of the Phantom.

Finally, the Japanese team, Crazy Raccoon, saw most of the players on the left side of the graph. However, only Medusa showed a strong preference for the Vandal. Munchkin and zepher displayed a slight preference, while neth and rion were more on the Phantom side.

Team Liquid (white) showed the most scattered players across the whole graph. L1NK found himself to be one of the most prominent Phantom users. The team’s star player, ScreaM, was more fond of the Phantom, however not as much as L1NK. Jamppi showed very little preference for either rifle, landing himself a spot near the dead middle of the spectrum. Not far off is Kryptix, who had a minor preference for opting for the Vandal. Finally, on the very left we can find soulcas, who emerged as one of the most Vandal-dependent players of Masters Reykjavik.