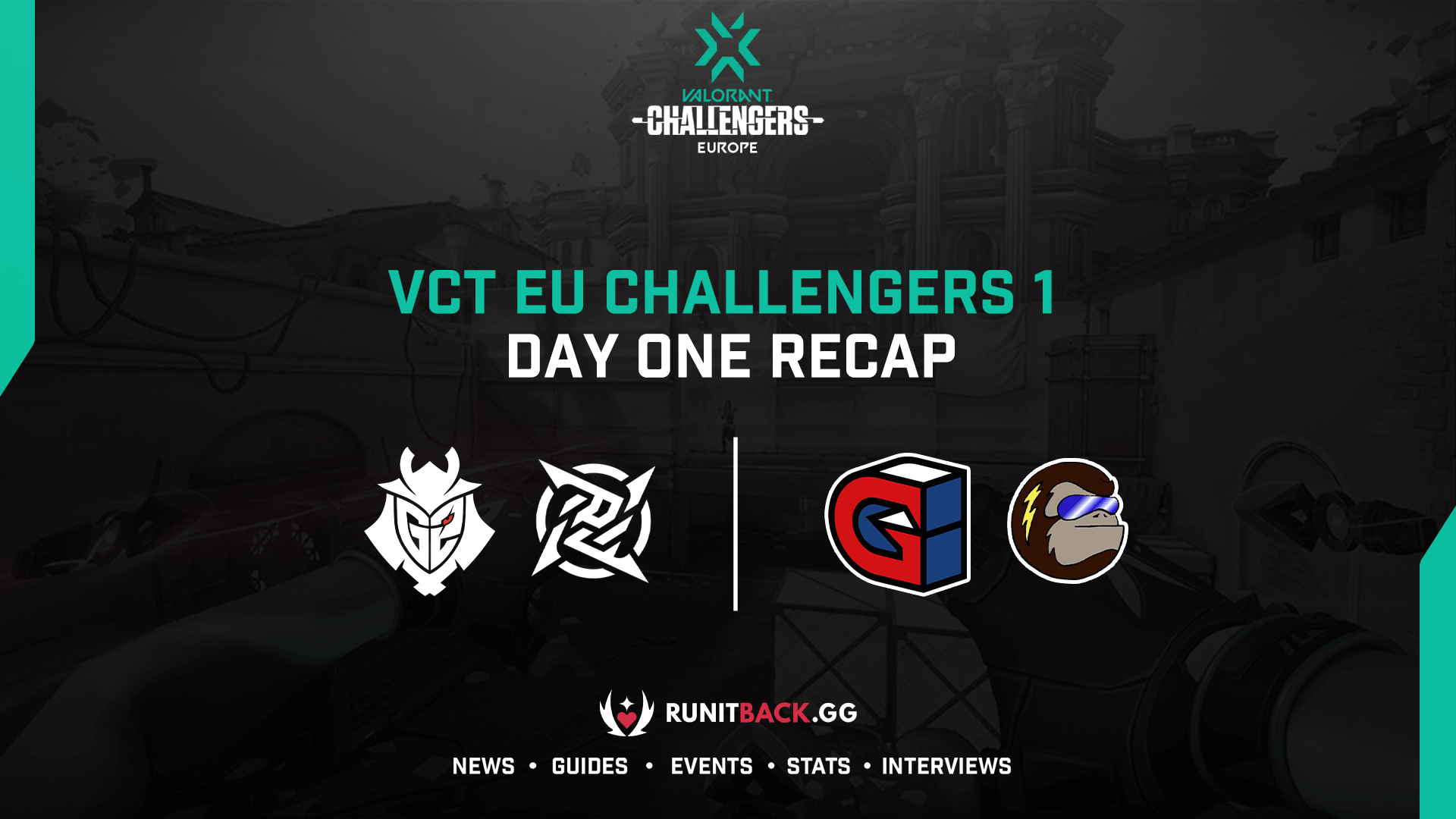 The first day of the Valorant Champions Tour Europe Challengers 1 is over. G2 Esports faced Ninjas in Pyjamas (NIP) while Monkey Business went up against Guild Esports. Each win meant straight qualification for Challengers 2, where a few spots for the Masters await. VCT Europe Challengers 1 main event features best-of-three (BO3) matchups over a two-day period.

Check out our preview of the event for the matchups, format, and information on the tourney.

The first matchup brought us G2 Esports and the ever-hungry NIP squad, as Kevin “Ex6TenZ” Droolans and co. were seeking revenge after the lost semifinal of Red Bull Home Ground.

NIP picked Icebox as the first map of the matchup. NIP asserted dominance early on, taking three maps straight after the pistol to lead the way on attack. G2 managed to get some rounds in, but were ultimately overrun on attack, as NIP took the half 8:4. The second half saw G2 take the early lead instead after taking the two first rounds. NIP recuperated fast. Ex6TenZ side went on to chain four rounds, as a 3k by Ardis “ardiis” Svarenieks was not enough to stop the defuse on round 20, making the Ninjas take Icebox 13:7. Egor “chiwawa” on Cypher was the standout player with 24 kills.

Next we were taken to Bind where G2 had to win their map pick to force the decider. And so they did in convincing fashion. A quick 4-round lead led to a dominant half by G2 on their attacking side, with six successful Spike explosions. G2 took the half 9:3 as NIP were looking lackluster on their opponent’s map pick. On their own attacking side, NIP managed to take the first two rounds with sheer eliminations, but were repelled by G2’s expert map control. G2 chained four rounds to take Bind with ease at a 13:5 scoreline. Bind saw Oscar “mixwell” Cañellas Colocho step up for his side with 23 frags.

The decider turned out to be Split. The battle turned into a one-sided affair by the end of the first half with G2 on defense. Initially, NIP had the upper hand as by round 6, it was 4:2 for the Ninjas. This was turned around swiftly by the defending G2 as they stringed six rounds to close out the half heavily in their favor at 8:4. NIP had to turn it around fast, and boy did they do it. A great team effort guaranteed the pistol for the Ninjas on defense. This was followed up by five straight rounds, making it 10:8 for NIP. A 4k followed by a defuse by Yaroslav “Jady” Nikolaev saw NIP pull out the upset at 13:10 as Ninjas in Pyjamas advance to Challenger 2. Meanwhile, G2 Esports must qualify all over again for the event.

The second matchup of the day brought us the organization-less Monkey business take on Guild Esports.

Guild selected Ascent as their pick, taking us right there for the first match. Right off the bat it seemed like Ascent would be Guild’s playground as on attack they looked like a formidable side…for the first three rounds. Monkey business mounted on a defensive wall to overturn the tides of battle. Eight straight rounds went their way to shock Guild at the half at 8:4. Unfortunately, the nightmare just began for the Swedish Guild roster. A fantastic team effort led by Theo “OniBy” Tarlier with a 2k, saw the org-less side take the pistol. What followed was ultimate domination as the side took five straight rounds by pure assassination to win Guild’s map pick by a massive 13:4. Guild looked somewhat lackluster as Yacine “Yacine” Laghmari was the only team member to score a positive KD ratio on the map.

Monkey business’ map pick was up next. It was Icebox, as Guild had their backs against the wall going into this one. However, they started on the right foot by picking up the initial two rounds. Unfortunately for them, Monkeys followed up with six of their own, shaping up the map to be another blowout. Luckily, they brought it to a close-enough score of 7:5, with Monkey business still in the lead. The second half saw one of the most dominant showings of the night from one player. Dragan “elllement” Milanović decided to just go off on the Reyna. A great team effort to play around elllement’s moment of flow, saw the man take up 31 frags, pushing his side to another map victory at 13:9. Guild just could not find a stride on attack.

Guild Esports will have to qualify again for Challengers 2. Monkey business take the second spot at Challengers 2 after a fantastic showing.

Join us tomorrow us we’ll be covering the remaining two matches of VCT Europe Challengers 1. Fnatic will face Wave Esports and right after Team Liquid will battle FunPlus Phoenix is what may be one of the best matchups of the event thus far.