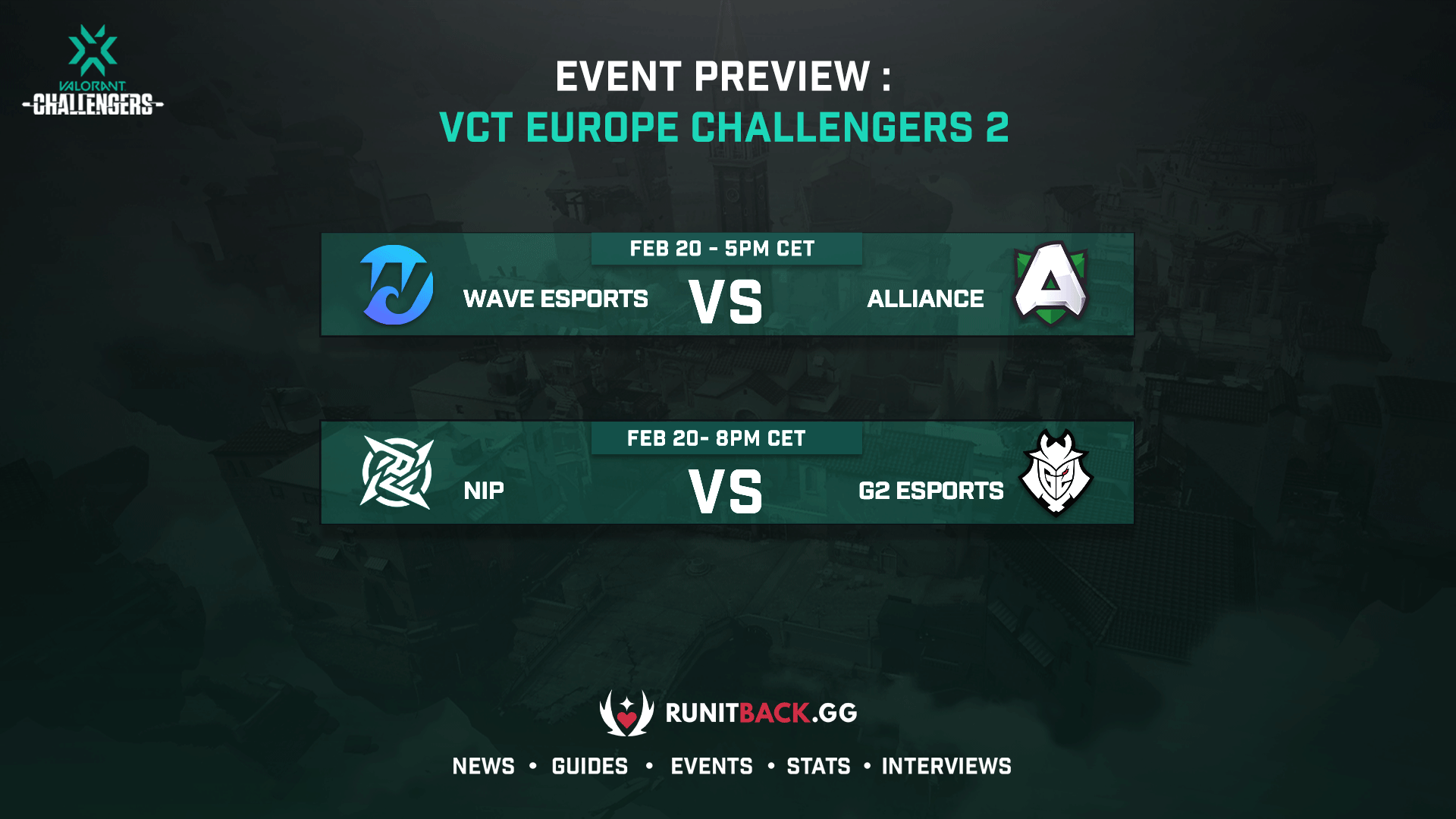 Valorant Champions Tour (VCT) Challengers 2 main event is kicking off today with our first pair of matchups. The best-of-three (BO3) matchups will see the winner take the spot at the very first Masters event come March. Wave Esports will go up against Alliance, while G2 Esports will face Ninjas in Pyjamas (NIP) and get back for the matchup back in Challengers 1.

Both teams have had their fare share of successful upsets and victories over the course of VCT. Wave had a straight pass into Challengers 2 by eliminating Fnatic. Alliance shattered Team Liquid’s dreams of making it into Masters at the qualifying stage of Challengers 2. Both teams are coming into this matchup having proven much, but having a lot more to prove down the line. One of those two teams will be the first ever to reach the Masters European event of VCT.

Alliance has soared through the qualifiers at Challengers 2 by overcoming Cream Real Betis, DfuseTeam, and most importantly, Team Liquid, where they managed to smash Adil “ScreaM” Benrlitom’s side 13:1 on Icebox. Alliances’ biggest weapon is definitely Thomas “kAdavra” Johner on Jett and Reyna. The Frenchman has popped off during the qualifier for his side to attain an average acs of 283 in 11 matches, as well as getting a whopping 254 kills. If he can replicate this performance against Wave, then we’ve got a hefty matchup on our hands.

To compare the same stats, Wave esports have Murat “murii” Korkomaz on their side to counter kAdavra. During their run at Challengers 1 murii attained an average combat score of 306 along with 146 kills over the course of 7 matches. If the two can pop off for their sides, we’re going to have a fragathon on our hands in the upcoming matchup.

This will be a guaranteed showdown of the day. Both teams are coming in with totally different motivational drivers. G2 Esports was denied straight entry into Challengers 2 by NIP after a 2-1 loss to Kevin “Ex6TenZ“ Droolans’ side at Challengers 1. This led to G2’s unbeaten run at Challengers 2 qualifier against Rix.GG, Inside Games, and finally Animel, to bring us to this very day, where G2 will be looking to punch back by blasting NIP out of Challengers 2 and taking the spot at the Masters event all for themselves. NIP, on the other hand, will be looking to replicate their performance against G2 like the last time the two have met.

It is extremely difficult to single out any two players from both sides. However, G2’s newest addition to the roster, Aleksander “zeek” Zygmunt, has seen to be extremely consistent for his side ever since he joined the team. Paired with Oscar “mixwell” Cañellas Colocho, the two can definitely frag out and have attained the highest acs at Challengers 2 qualifier at 225 and 268 respectively (over the course of 10 matches).

Meanwhile, NIP have a secret weapon of their own, Yaroslav “Jady” Nikolaev, who just so happens to be a recent addition to the roster of their own. Maining unlikely agents to get the top frags, Sage and Sova, Jady is a madmen, impressing with unlikely Sage fragathons. At Challengers 1 qualifiers, Jady maintained an acs of 270 over 8 matches, as well as 156 kills, sitting on top of his team’s performance table.

One thing is for sure, if you’re wondering which matchup to watch today, we definitely recommend this one. It’s sure to be a tight game with both teams trading shots throughout. This VCT Challengers 2 matchups is going to be an absolute blast to spectate.