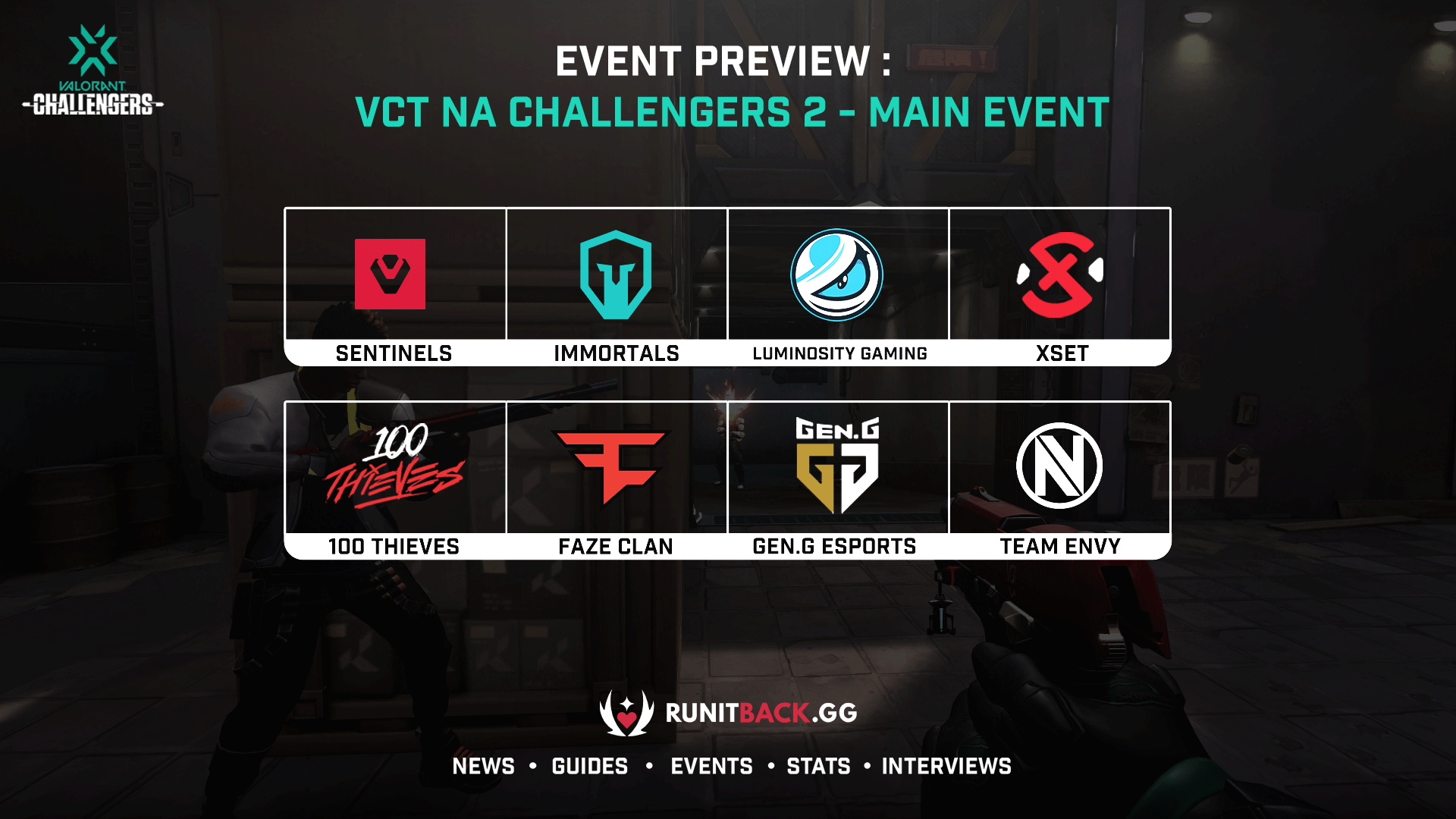 The VCT NA Challengers 2 Main Event is upon us. This is the big one, folks. After several weeks of intense qualifiers, this Main Event will see the top four teams advance to the NA Stage 1 Masters tournament. There are some notable names missing from this competition. On the flip side, however, there is no surprise to the names that do appear within the bracket.

Half of the teams automatically qualified for Challengers 2 by way of Challengers 1. The remaining teams battled through a massive bracket in the Challengers 2 Open Qualifiers. In the end, all eight find themselves here with a tough journey ahead. The VCT NA Challengers 2 Main Event isn’t just about advancing to Masters. There is that sweet sweet prize money on the line.

With the event pushed back by a few days due to the weather and power outage situation in Texas, one has to wonder if that delay will play a part in any of the teams’ efforts.

Sentinels dominated their way through the Lower Bracket of Challengers 1. That found them in the Grand Final against an Immortals squad with a one map advantage. That didn’t matter as Sentinels won three straight maps to take the first seed of this VCT NA Challengers 2 Main Event. FaZe Clan, who stay have plenty to prove, fought through arguably the easiest pathway to qualification. Never count a team out in NA Valorant. This is Sentinels’ to lose, though.

Prediction: Sentinels 2:0 FaZe Clan – The entire Sentinels team was without power for the majority of the week. That won’t stop them from pulling up and taking a 2:0 victory over FaZe Clan. That is just how good this team is and can be.

Believe it or not, Team Envy is coming from the Open Qualifier. That is thanks to XSET sending them packing in the Lower Bracket of Challengers 1. This rematch will see two hungry teams playing their hearts out. The winner will take on either Sentinels or FaZe Clan, while the loser drops to the Lower Round 1. This has a chance to be the most exciting match up of the VCT NA Challengers 2 Main Event Quarterfinals. XSET and Team Envy won’t be pulling any punches here.

Prediction: Team Envy 2:0 XSET – Team Envy may have lost their last meeting, but they are just too talented to let that hold them back. XSET is going to put a fight. There’s no doubt about that. Team Envy will advance by winning two extremely close maps.

Immortals went wild in the Challengers 1 Main Event before dropping the Grand Final to Sentinels. They rolled through XSET, Luminosity Gaming, and their opponents for this match up, Gen.G. Gen.G did not have an easy trip through the Open Qualifier. They defeated both Cloud9 Blue and TSM in order to claim their spot. Immortals is going to want a repeat of their last battle, but Gen.G will do everything they can to prevent that.

Prediction: Immortals 2:1 Gen.G Esports – This contest will be a little closer than the last series. Still, Immortals will persevere and send Gen.G to the Lower Bracket. The event is being played on patch 2.02, therefore the Reyna changes will not be in effect. Expect Andrew “ShoT_UP” Orlowski to go off as he always does.

Luminosity Gaming has been playing their best Valorant since the current roster was established. They swept through Sentinels and Team Envy in Challengers 1 before being sent to the Lower Bracket by Immortals. They were then defeated in Lower Bracket Final by a vengeful Sentinels squad. 100 Thieves missed out on Challengers 1, losing to Carpe Noctem without Nicholas “nitr0” Cannella. Their fifth is back and it was business as usual. The North American First Strike Champions sent Ghost Gaming and Andbox packing.

Prediction: Luminosity Gaming 2:0 100 Thieves – This may come as a bit of a shocker, but LG has been a roll lately. More than likely, they are as prepared as they could ever be going into a match up against 100 Thieves. Honestly, this prediction could be spot on or completely wrong. This series may be the toss up of the tournament.

Be sure to stay tuned to Run It Back for more Valorant Champions Tour coverage, as well as breaking news, guides, and more!