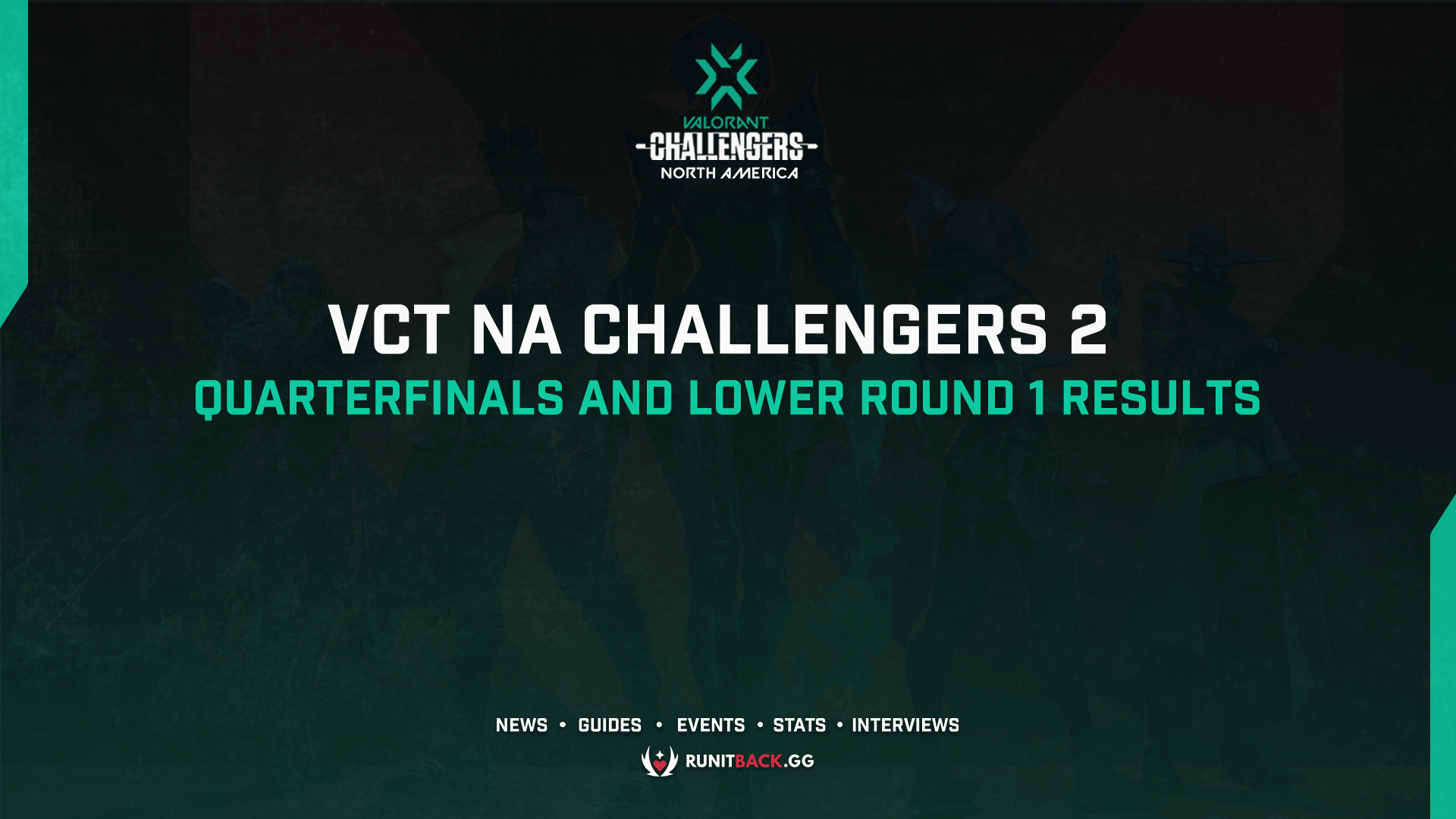 Run It Back has the results for the first day of action, which includes the Upper Quarterfinals and the first round of the Lower Bracket.

Sentinels showed absolutely zero rust after being without power for days prior to the event. Against FaZe Clan, the series started on Haven. Faze showed some promise on the attacking side. It was a bit back and forth with strung together rounds for both teams. The first half ended in a surprising 6:6 tie. That is when Sentinels took charge. As the attackers, they dominated. Two rounds went their way with one going in favor of FaZe Clan. The efforts of Michael “dapr” Gulino and Jay “sinatraa” Won were too much for FaZe Clan to handle as Sentinels raced to a 13:7 victory.

It was more or less the same as things moved to Split. They just happened on other sides of the Spike. Once again, FaZe Clan was able to keep things tied going into the half. 6:6 was the score, but with their defensive side finished, things looked even more bleak. Shahzeeb “ShahZaM” Khan and Jared “zombs” Gitlin were the Sentinels players to show off on this map. Four successful defenses went to Sentinels before an attacking round went to FaZe Clan. Three more was all it took and Split ended just like Haven with a 13:7 round count.

Team Envy must have had something to do, because they were in and out against XSET. It started on Split and the entire team simply dominated. Only one XSET player finished with over 10 kills at 11. It was so quick that Victor “food” Wong was only able to snag 16 kills as Raze. Those kills of course came with multiple 2K and 3K rounds. Team Envy won eight rounds straight as the attackers. Only two of them were to the Spike detonating. The rest were from eliminations. XSET finally picked up a round, but Envy eliminated them five more times, three on attack and two on defense after the half, to win 13:1.

It was a bit closer on Bind, but not close enough to XSET to put a dent in Team Envy’s plans. Austin “crashies” Roberts topped the leaderboard for his team on this map. Three rounds saw a 2K alongside a 3K and 4K effort throughout the map. Starting on defense, Envy handled their business. XSET was able to snag four rounds here and there, hoping to bounce back as the defenders. Five hard hitting attacker rounds mixed with three defensive wins by XSET ended the series. Team Envy sent XSET to the NA VCT Challengers 2 Main Event Lower Bracket 13:7.

Immortals versus Gen.G began on Icebox. Things were as back and forth as they could be during the the first half. Gen.G defended as Immortals were tasked with planting the Spike. The eighth and ninth round of the game broke the cycle, going to Immortals. Gen.G quickly turned the trend back on, however. The first half ended dead even at 6:6. The second half is where Immortals dominated. Amgalan “Genghsta” Nemekhbayar held it down as Sova with a solid 21 kills along with 10 assists. Gen.G would gain zero rounds as the attacking team, losing to Immortals 13:6.

Moving to Ascent, the trend basically picked right back up. While the amount of rounds secured in succession were higher for each team, the end result remained the same. Half time saw yet another tie between Immortals and Gen.G at 6:6. This time, Immortals popped off as the attackers to finish the battle. Genghsta kept up his stellar play with Andrew “ShoT_UP” Orlowski joining him. This was an extremely rare Breach appearance by way of ShoT_UP. Even off of a duelist, he still found a way to frag out. Seven attacking rounds were won by Immortals to advance in the tournament 13:9.

Luminosity Gaming and 100 Thieves traded blows throughout this series. LG has been on a roll and 100T are looking to maintain their place at the top after winning First Strike. Starting on Ascent, 100 Thieves showed why they are the Champions. As the attackers, they handled four quick rounds. LG started to feel the rhythm in the middle portion of the first half. That was enough to end it 6:6. 100 Thieves was ready to win on defense, though. Seven straight rounds started the second half and ended the second half as Quan “dicey” Tran dominated. 100T took the first map 13:6.

Icebox was a furious marathon for both Luminosity and 100 Thieves. 100T started off well on defense, making sure Luminosity did not gather any momentum. It worked as well as it could with yet another half time tie of 6:6. Kaleb “moose” Jayne and Brady “thief” Dever stepped up for LG to keep things in their favor. 100T just would not stay down, however, taking two rounds here and two rounds there. Finally, LG put up the brick wall and won Icebox 13:10.

This series headed to the only map three of the Upper Quarterfinals. LG started on defense, halting any effort to detonate the Spike by 100T. A few rounds in though and 100T found their groove. They pulled themselves back into the fight, once again forcing a 6:6 halftime tie. They then took the first round of the second half, ready to defend their way to victory. thief and moose were back it again for LG, though. They had other plans. LG was able to take seven straight attacking rounds to knock down 100T 13:7.

The first Lower Round contest saw XSET and FaZe Clan go to war. Starting off on Haven, FaZe Clan dominated on defense. They won eight rounds in two sets of four, only allowing XSET to get four of their own. As the teams switched sides, XSET seemed to reset. They were ready to defend more than FaZe Clan was ready to attack. Jordan “AYRIN” He went on a rampage as Raze. Seven rounds saw him get two kills throughout Haven. FaZe Clan could only muster up two rounds as XSET defended their way to a 13:10 victory.

Bind was the second map and seemed a lot closer than it actually was to those watching it live. XSET began the map on defense, showing their skills with Brendan “BcJ” Jensen ruining any hope FaZe Clan had. The first half ended with FaZe Clan putting together a few rounds to avoid a big deficit. Halftime came with a 7:5 score in favor of XSET. That lead would not be taken away from them. FaZe Clan could only defend twice, sprinkled in the six attacking rounds XSET demanded. XSET advanced to Lower Round 2 while FaZe Clan would have to try again in a 13:7 Bind finish.

Gen.G Esports versus 100 Thieves is one of the most surprising Lower Round combinations that could have happened. The match did not disappoint, though. Haven was a brutal contest that pushed both teams to their limits. Both sides were completely even. The first half saw Gen.G attack with every handful of rounds seeing a potential shift in momentum that never played out. The second half was very similar. The two teams expressed their will to win, but that saw a 12:12 tie. Overtime approached with 100T and Gen.G both taking a round. 100T had had enough finally, taking two straight and winning 15:13.

Map two was played on Icebox, but the series remained just as hot for the NA First Strike Champions. 100 Thieves had plenty of tricks still up their sleeves. Starting as the attacking team, they immediately took it to Gen.G. After a couple of back and forth rounds, 100T pulled ahead with no intentions of looking back. The first half ended 9:3 in favor of the Thieves. Nicholas “nitr0” Cannella on Omen and Peter “Asuna” Mazuryk on Sage both dominated Gen.G. After the first round of half two went to Gen.G, 100 Thieves cruised to the finish line with a 13:4 map.

Stay tuned to Run It Back for more Valorant Champions Tour coverage as the NA VCT Challengers 2 Main Event continues!