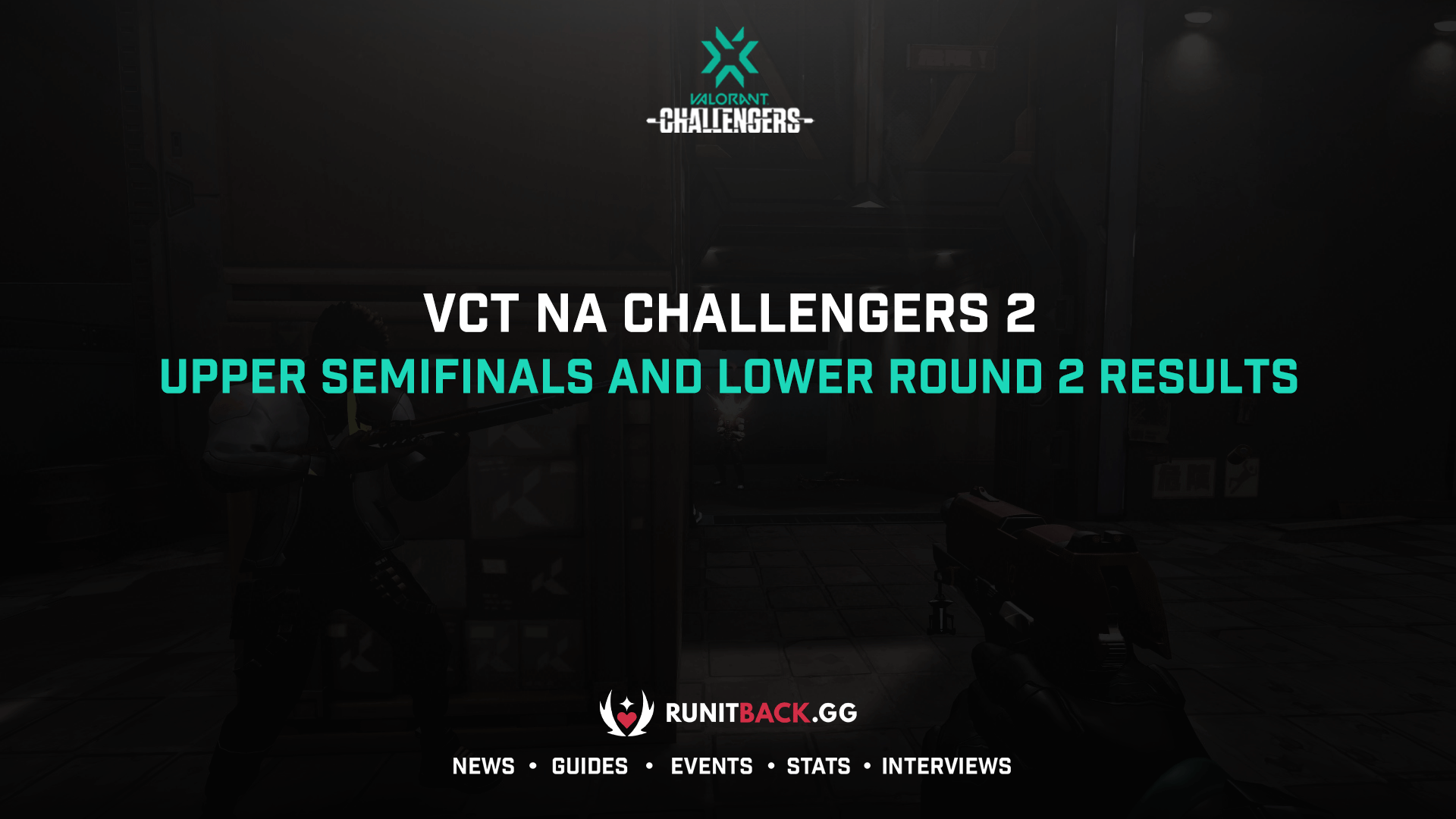 The first round of the VCT NA Challengers 2 Main Event has already completed. Teams advanced, teams were sent home, and some exciting Valorant was on display for the world to see. Onto the second round, featuring both the Upper Semifinals and Lower Round 2. The winners were done for the day, but the losers had to play once more against the Lower Round 1 winners.

Buckle up as Run It Back continues providing the results of the VCT NA Challengers 2 Main Event.

Sentinels versus Team Envy was never going to be anything but a fast paced, hard hitting series. That proved to be the theme throughout all three maps. Starting on Ascent, Team Envy were the attackers. Sentinels were able to take a couple of rounds between Envy’s onslaught before finally shutting them down to end the first half. Sides switched with a 6:6 tie. Each member of both teams had a solid game, but Team Envy kicked it into gear on defense. Only four rounds would go to Sentinels as Team Envy closed it out 13:10.

Map two took the series to Icebox. Team Envy started out well on defense, but Sentinels found their groove. Five solid attacking rounds went in their favor only, though, as Team Envy took four straight to end the first half. Moving into the second half saw Team Envy start just as well on the attacking side. Sentinels quickly changed that tune. The incredible effort from Austin “crashies” Roberts was not enough to break through Shahzeeb “ShahZaM” Khan and the Sentinels defense. Sentinels forced a map three by taking Icebox 13:10.

The series decider took place on Split. It proved to be a bit attacker sided as Team Envy rushed through the first half with an 8:4 lead. As Jay “sinatraa” Won popped for Sentinels, Team Envy had a more balanced approach. They relied on every aspect of their team to hold down the fort and finish it with a victory. Sentinels gave them some trouble after halftime, taking the first three rounds. Two more rounds would eventually go to SEN, but Envy manage to sprinkle enough successful defenses in for the 13:9 victory.

If Sentinels versus Team Envy was a fight, Luminosity versus Immortals was a war. The first map was the frozen tundra of Icebox. It saw Amgalan “Genghsta” Nemekhbayar once again take the top frag spot on Immortals. He had eight rounds with two kills, one with three kills, and two with four kills. He had to work for those as LG put on the pressure. They attacked very well at first, but IMT were able to close the gap and leave the first half only down by two. The second half was almost an exact mirror of the first one as IMT dominated for some time before LG put up a wall and stopped them. Naturally, things went to OT. Back and forth they went until LG took three straight rounds to tie and then win 16:14.

Ascent could have easily seen another overtime scenario, but Immortals were able to close it out beforehand. This time, Diondre “YaBoiDre” Bond had the most kills on the board. That is two maps in a row where the most kills went to a member on the losing team. LG defended first, giving up a couple rounds, then taking several of their own. IMT pushed ahead at the end of the half, however, switching sides with a 7:5 lead. The second half was a seesaw of rounds. LG attacked while IMT would successfully defend. In the 24th round of the map, Immortals prevented overtime and forced map three 13:11.

Bind saw Immortals prove themselves yet again, taking it to an incredibly hot Luminosity squad in a tight series. Rhett “Kehmicals” Lynch, still a relative newcomer to the team, put on a show as Raze. LG took the first round, showing promise on attack, but it was five straight defensive rounds won by IMT that put a damper on their plans. Instead of falling apart, LG kicked back with five rounds of their own. IMT took the final round of the half, leaving things tied. Switching sides, IMT had no time to fool around with LG. They took five attacking rounds before LG could successfully defend once. Two more after that and it was all over. Immortals took the series, advancing in the VCT NA Challengers 2 Main Event by way of a 13:7 romping.

XSET was pushed down to the Lower Round by Team Envy, but has been lights out since then. Starting on Bind, the series saw XSET surprisingly dominate LG. Brendan “BcJ” Jensen kept up his top fragging ways and continued the trend of Sova earning that spot throughout the event. As the attacking team, XSET took an incredible nine rounds from Luminosity Gaming. They showed that Bind is just their map, no matter what side of the Spike they happen to be on. After halftime, LG tried to push back with some solid attacking round sonly for XSET to win enough for the finish. XSET forcefully won Bind 13:6.

XSET continued to impress on Ascent. The domination of Luminosity Gaming continued. The map started with XSET winning the pistol round. LG then fought their way to a three round lead. Every single round of the first half was a successful defense by XSET after the small streak of Luminosity. Flipping sides put XSET on attack with Luminosity looking to stop them in their tracks. XSET took their first two offensive rounds, followed by two for LG. XSET’s lead was just too much for LG to recover from. The upset was complete with a 13:7 map victory on Ascent.

Sentinels versus 100 Thieves is a match up one would expect to see in a Grand Final series. Instead, this contest decided who would advance in the VCT NA Challengers 2 Main Event and who would head back to the drawing board. SEN had a Semifinals loss in First Strike to 100T they’d like to avenge, and avenge they did. On Ascent, Sentinels went all out with Hunter “SicK” Mims setting the tempo. On defense, they were able to keep 100 Thieves to only three rounds. After halftime, they also kept 100T to only three rounds, taking four of their own and winning a swift 13:6 map.

The momentum for Sentinels carried over completely onto Haven. The contest was so speedy that not a single player topped 20 kills. Sentinels started on attack and would have ended it there if that was even possible. Seven straight rounds went in their favor before 100T took one. Then some trading of rounds occurred, but Sentinels ended the half up 9:3. 100T took the very first round of the second half, but that was all they’d get. Four rounds later and Sentinels sent 100T to Challengers 3 with a 13:4 beating on the First Strike Champions.

Stay tuned to Run It Back for further coverage of the Valorant Champions Tour!