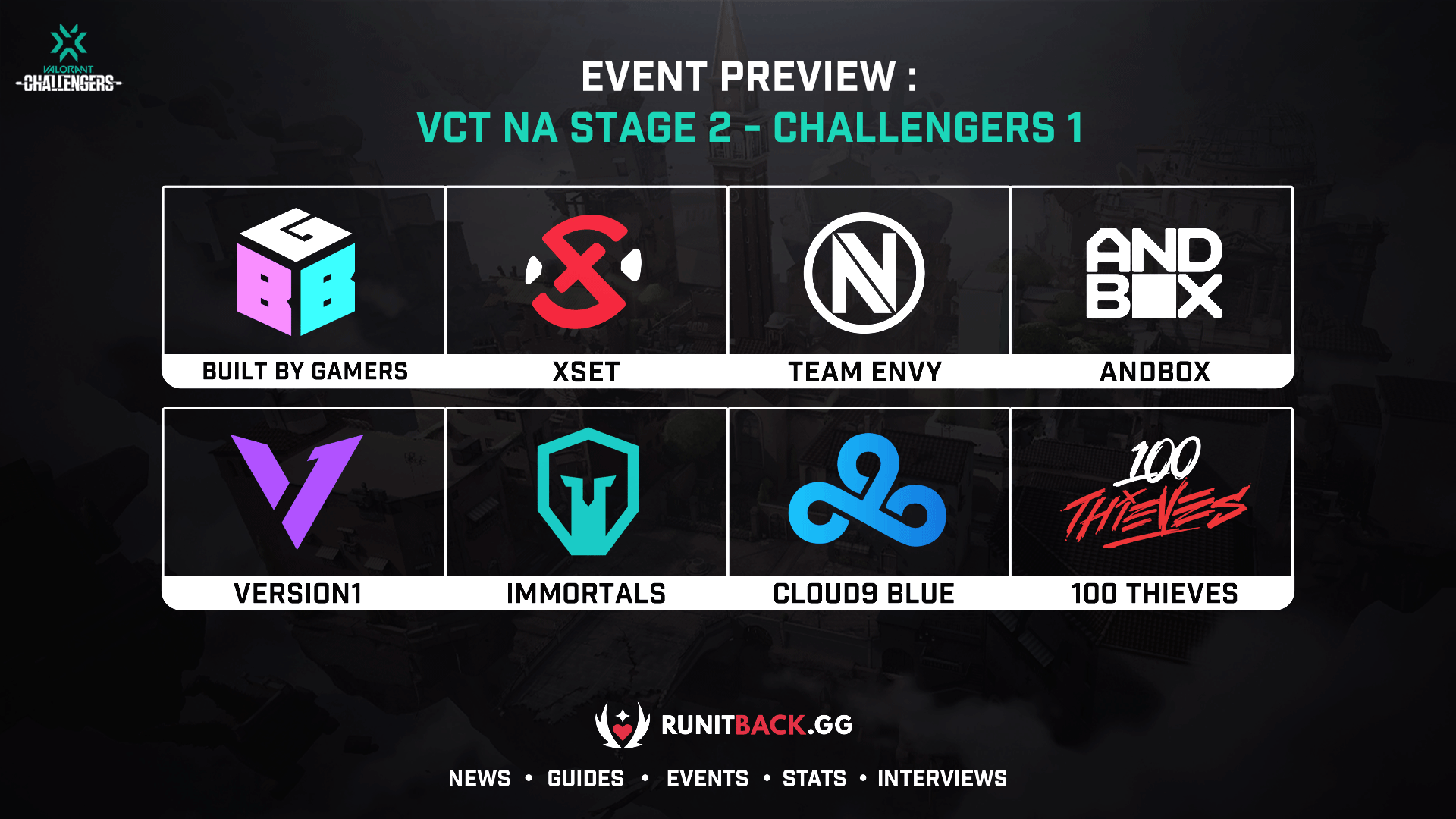 Stage 2 of the Valorant Champions Tour is firing on all cylinders. North America Challengers 1 is especially hot. The open qualifiers of the tournament saw some incredible action and surprises. The top three teams from the last Masters were all eliminated. Add another team from Masters being forced out of the qualifier and half of the field from that tournament is nowhere to be found.

The eight teams battling it out for a chance at Challengers Finals are:

The North American Challengers 1 format sees best-of-three contests with the Grand Final being a best-of-five. The tournament is double elimination, giving teams a chance to fight back from the Lower Bracket. The top four teams will qualify for NA Challengers Finals with the other four securing a spot in the Challengers 2 Main Event.

Everyone knows the story of 100 Thieves. The team started off on the wrong foot in Valorant, rebuilt, and proved themselves as the North America First Strike champions. Since then, it hasn’t been such a smooth ride. Spencer “Hiko” Martin was, naturally, not satisfied with the team’s exit from Masters. This is just another pit stop on their path back to the top. Andbox will be looking to put the red light in front of them. They have had their fair share of roster changes, but have not found the same success as 100T. They did defeat a Noble roster that sent Luminosity Gaming packing from the open qualifier just prior, however. In the world of North American Valorant, never count any team out. Expect to see 100 Thieves prevail here, but do not be surprised if Andbox rises to the occasion.

If fans had to guess which Cloud9 team would be in the North America Challengers 1 Main Event, a large majority of them would have probably picked White. The VCT Game Changers champions did not qualify. Cloud9 Blue should come as no surprise, though. They have won their last nine official matches coming into this Quarterfinals series against Immortals. That includes besting Gen.G Esports, the third place Masters team, to find themselves in this spot. Immortals should be in the conversation for one of the top teams in NA. They just haven’t made it over the hump to find greatness. After beating TSM, Immortals should be fired up. Cloud9 Blue are no slouches, but Immortals is going to bring an energy never seen before to this match.

XSET vs. Built By Gamers

This is the true tossup of the Quarterfinals. Either of these teams could show up and show out. Built By Gamers has a lot of pressure put on them, though, after beating Sentinels, the first place team from Masters. They sent the arguable best team in North America to the back of the line in 2:0 fashion. Was it a fluke? Maybe an off day for Sentinels? Regardless, BBG is here and they aren’t. They still have plenty to prove against a decently successful XSET team. While XSET may not have a ton of tournament victories under their belt, they made it to Masters for a reason. While they have fallen to some top teams, they have also beaten plenty. In 2021, XSET has series wins over NRG, LG, FaZe, TSM, C9 White, and two over BBG. This is the time to shine for both of these squads.

Team Envy has been as consistent as any team in Valorant. Making it to the North America Challengers 1 Main Event after coming in fourth at Masters was a given. What was not a given was seeing their opponent qualify for the Main Event. Version1 has been very successful against some lower tier teams. This event was their chance to carve out their space among the best. The last two matches against FaZe Clan saw them beaten 2:1. V1 flipped the script this time around, advancing 2:1 against the runner up of Masters. It would be seen as crazy to predict a Version1 win here. It could happen. Anything could happen. They would just have to play the best game of their lives to topple Team Envy.

Of course, these are just the Quarterfinals matchups. The matches that could happen after some wins and losses, whether in the Upper or Lower Bracket, are even more intriguing. 100 Thieves haven’t played Team Envy since the JBL Quantum Cup in December. Cloud9 Blue has only played Andbox and V1 in the last two months out of all of these teams. Those are just a couple examples of the storylines coming into the North America Challengers 1 Main Event. It is going to be an intense weekend of NA Valorant.

Stay tuned to Run It Back for more VCT coverage, breaking news, interviews, and more!