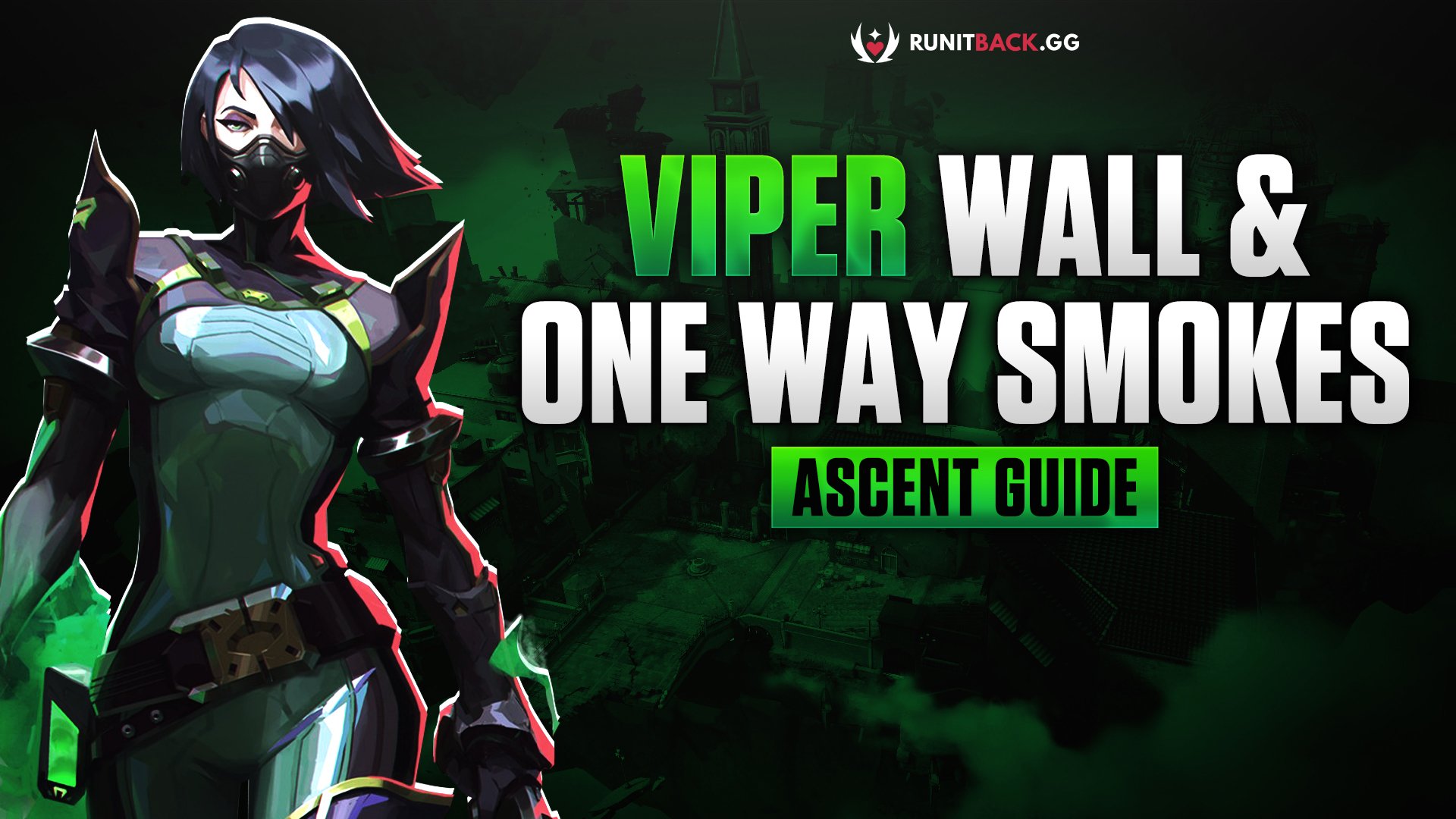 The fourth and, at this time, most recent map added to Valorant is Ascent. While it only holds two sites, it rivals Haven in size. It is a large map with plenty of open spaces as well as tight corners and small rooms. Both sites on Ascent have an entrance from attacker side and from mid. They both also only have one entrance from defender spawn.

A-Site is littered with boxes to take cover behind. B Site has two approaches around the boathouse with a back of the site for post-plant hiding. Viper can easily defend either with her Toxic Screen or Poison Cloud. The screen can split sites and separate teammates while the cloud can be used as a one-way smoke to delay a push or snag some easy picks.

Viper can hold A Site and Mid with her Toxic Screen on defense. Move to the left of the A-Main entrance and simply aim towards Mid. Now that the emitters can be launched before the round fully begins, Viper can easily set this up and be in position once the spawn barrier goes down. This may hold off a push into A Site long enough for teammates to rotate. The same goes for Mid.

A trick to use here is to place the emitters just slightly away from the wall. This allows Viper to have vision on the defender side of the Toxic Screen. If the push comes in, players will typically flash through the screen. Viper will remain unbothered, able to decimate the players as they rush in.

Attacking A-Site can be tough. Unless the team is able to control mid, it will be like shooting fish in a barrel piling through the entrance from A-Main. Viper’s Toxic Screen can make it much easier. Once A-Main is clear and controlled, line up the screen over the fan unit, next to the light fixture. Make sure the emitters are lined up to the farthest corner of A Tower.

Send the emitters and get ready for the push. The Toxic Screen will split A-Site down the middle diagonally. It will block off A-Tree, Heaven, and Hell. Any players pushed up further will be separated from their teammates. The screen will prevent players at the aforementioned locations from seeing Viper and her team. Once the wall goes down, A-Site should be fully controlled, with teammates in the appropriate places to surprise the enemies that are waiting.

Attacking Mid is almost a must on Ascent. It helps teams put pressure from all sides when picking a site to rush. Viper can set up her Toxic Screen here from B Lobby with the opposing team having no idea. Just aim across Mid Courtyard and fire the emitters. It will go across the courtyard and up onto the Catwalk.

Players moving straight to Catwalk or through Mid Link will have plenty of cover. This Toxic Screen makes it easy to push through A-Tree or to Mid Bottom. The Mid Link player can slither across Mid Courtyard undetected. Once the wall goes down, if anyone has pushed up from the defending team, they’ll be unpleasantly surprised by Viper or a teammate moving forward or waiting.

B Site’s defensive Toxic Screen is similar to A-Site’s. Just move slightly off to the side of the B Main archway. Tilt the screen just a bit so it covers Mid and A-Tree. Remember to do the sneaky trick to catch rushing opponents off guard if that card hasn’t been pulled in the game yet. Once the emitters go out, three separate areas will have a useful Toxic Screen.

The B Main entrance will be covered just enough to delay any push through. The stairs from the defender side leading down to Mid will have the screen over it. This will throw off any Mid rushers or Operator users from Catwalk. Lastly, A-Tree’s entrance towards A Window will allow a player to successfully rotate or escape an overwhelming attack from Mid Catwalk.

Attacking on B Site takes a different approach than attacking A-Site. Once the spawn barrier goes down, Viper can move into position. Line up the Toxic Screen right next to the gutter coming down the wall in Mid Link. Then, focus the emitters across to the corner of the defender spawn entryway. This won’t go across the site, but it will block popular holding points that watch over B Main.

The doorway to Mid Market will be completely covered. Any player trying to peek from defender spawn will have their vision impaired as well. The only worry comes from anyone in the boat house or on B Site directly. A full push from the team should be enough to trade those players out, if not simply overrun them, while they are separated due to the Toxic Screen.

When pushing A-Site, A-Main usually sees a large amount of the enemy team. This Poison Cloud can be set before the round starts, making it easy to trigger it when a push is certain. Line up underneath the right side of the A Site entryway. Put the crosshair on the last line before the ledge protrudes. Jump and right-click to lob the device. When the enemies approach from A-Main, trigger the Poison Cloud. If they are eager to rush in or peek, their feet will give them away for the elimination.

This one was covered previously, but is still a crazy one way smoke with Viper’s Poison Cloud. Players should line near the doorway just as Defender Spawn exits towards A-Side. When lined up, but the tip of the C ability’s left side at the top of the crack in the left wall. Jump and toss the device at the exact same time. The device will land on the Mid Bottom archway. Any players that move up to push will be taken down by shots from the back of Catwalk.

B Main sees a similar type of attacker push to A-Main. Holding it down with the Poison Cloud one way smoke is nearly identical. Viper needs to line up under the archway entrance and aim just above the door frame ledge. The spawn barrier will help put this one in place. Jump and right-click to lob the Poison Cloud device. It will land safely on that ledge. This will prevent a push in from B Main, with anyone foolish enough to move forward right in Viper’s sights.

This is another previously covered one-way Poison Cloud, but it is too good not to include here. While attacking as Viper, line up along the furthest wall of the B Lobby shack. The right-click icon has a small nearly visible arrow coming out of the top of it. Place the tip of that arrow underneath the swirling metal hook holding up the sign. Jump and throw the emitter. It will land on the wall near the defender spawn. If anyone is holding from that side or even on the barrel, they’ll be forced to move once the Poison Cloud is triggered.

Stay tuned to Run It Back for more guides, breaking news, and event information!