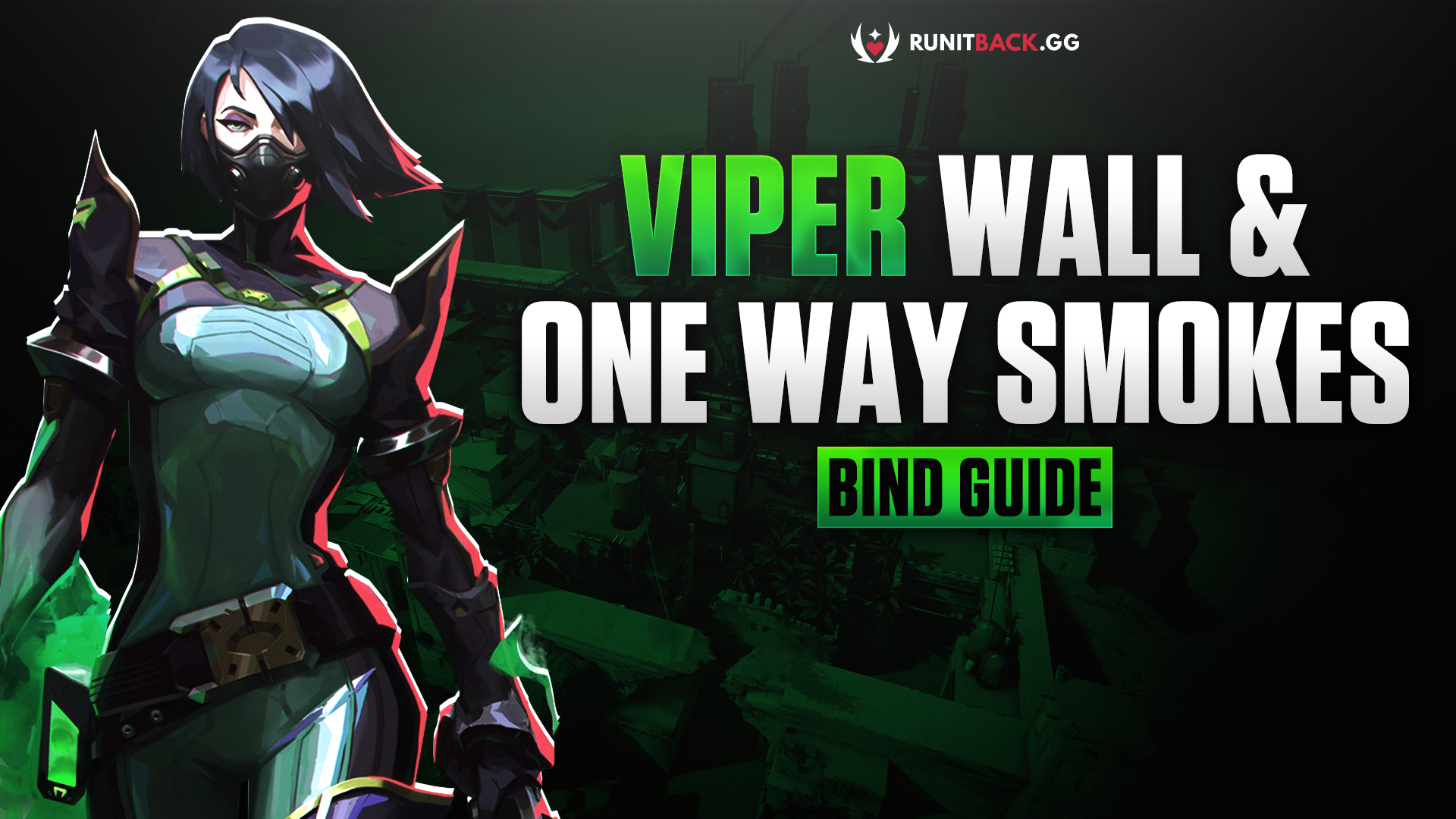 Viper is one of Valorant’s Controller agents. Her skillset is meant to split the map, confuse enemies, and make sure her teammates can clear the site with ease. Viper’s abilities can be considered a mix of Phoenix and Omen. She does have Snake Bite, which acts as a molly. Toxic Screen and Poison Cloud are the true controlling abilities, though. Toxic Screen places a wall that can separate enemy opponents from their squad or give friendly teammates an easy path to the site. The Poison Cloud acts as a smoke. Viper throws it and a green smoke orb removes vision.

Bind is typically not a map Viper should be played on. Nevertheless, she can be quite useful in the right hands. Her Toxic Screen can block off vision from enemies looking to enter a location. Her cloud can do the same but also be set up as a one way for the player or teammates to get the picks on the peekers.

The best position for the Toxic Screen on A Site is from A Bath entrance across to block A Short. A wonderful trick with Viper can be pulled off with most Toxic Screens that block small entryways. Fire the gas emitters and it will block every Attacker side path to A. Line it up just a tad further out from the doorway or walkway that is being covered.

Sit tight against the wall. When an opponent comes to flash in with Reyna or Phoenix, they will typically send their flash just past the screen. If the Toxic Screen is up, players will not be flashed when it passes. Then, as the enemies push up, start picking them off one by one. Otherwise, pull the screen down at a random time, catching enemies moving off guard as they are unaware of when the screen will dissipate.

The objective of Viper’s Toxic Screen as an Attacker is to remove enemy vision of certain points as well as separate them from their teammates. Jump onto the box near the ledge at the start of A Short. Fire the Toxic Screen emitters across all the way to the ramp for Heaven. Paired with some other team smokes or flashes, this makes taking the site quite easily.

Players can get to A Lamps with no problem and possibly even rotate to the Spawn entrance. If the team gets control of Heaven, the screen can even provide cover there. If pushing through A Bath, the same enemy separation occurs. The player in Heaven or watching from a corner near Showers has no cover from across the site.

B Site operates in a similar fashion to A Site. The Toxic Screen should go up just outside of the Garden entrance onto the site. Angle it slightly so that it lands through B Window more towards the window itself rather than in the middle of the room. The trick can apply here. Pull tight against the wall with the screen up and if players push in from Garden, they’re done for.

When it comes to B Window, enemies typically check corners and clear it out before making a heavy coordinated push out of the window. Timing it just right can through that coordination off. The enemies will be able to set up in B Window. Drop the Toxic Screen just as you think they may be ready to push forward. Catch them off guard and put them down.

Just like A Site, attacking B Site requires Viper’s Toxic Screen to split the site in half. Send it straight across the middle of B Site. Line up with the door along the wall in front of the fountain. That will send it over the box and even into the middle of CT/Elbow.

Enemies holding angles will be unaware of players coming from behind the other side of the wall. Teammates can take Elbow with a fast push while a slower one can come through Hookah to pick off those that may rotate through the screen in order to help those getting slaughtered by your teammates.

The best part about Viper’s Poison Cloud is that the barrier before the round begins can be used to ricochet it into position. At A Short, the stack of boxes can be used for a solid one-way Poison Cloud. Approach it, jump, and right-click to lob the device. It will land on the boxes and not be able to go overdue to the barrier. Trigger the Poison Cloud as the round begins and enemies that push up into A Short will be quick targets seen underneath the cloud.

Viper’s Poison Cloud can be rather large, making one-way clouds work differently than if Omen or Cypher placed their equivalent. On A Showers, use the same method as A Short. Approach the archway, jump, and right-click to lob the device. Back up into the corner near the ledge of Heaven. Set off the Poison Cloud and take a look at the bottom left corner of the doorway. The opponents may not notice that and think it is a regularly-placed Poison Cloud. The small opening will allow enemies to be seen if they attempt to cross to the other side of the entryway or move through to A Site.

The B Window one way is quite tricky. This one also calls for a jump and lob approach. The Poison Cloud emitter will land in the small window near the signs on the wall. Once it is in place, head to the B site entrance from Defender Spawn. If you hook more to the left, the B Window opening will be out of sight completely. Keeping in the middle allows players to take out those jumping from the Window or rotating to get a shot.

Stay tuned to Run it Back for more guides, event summaries, and breaking news!