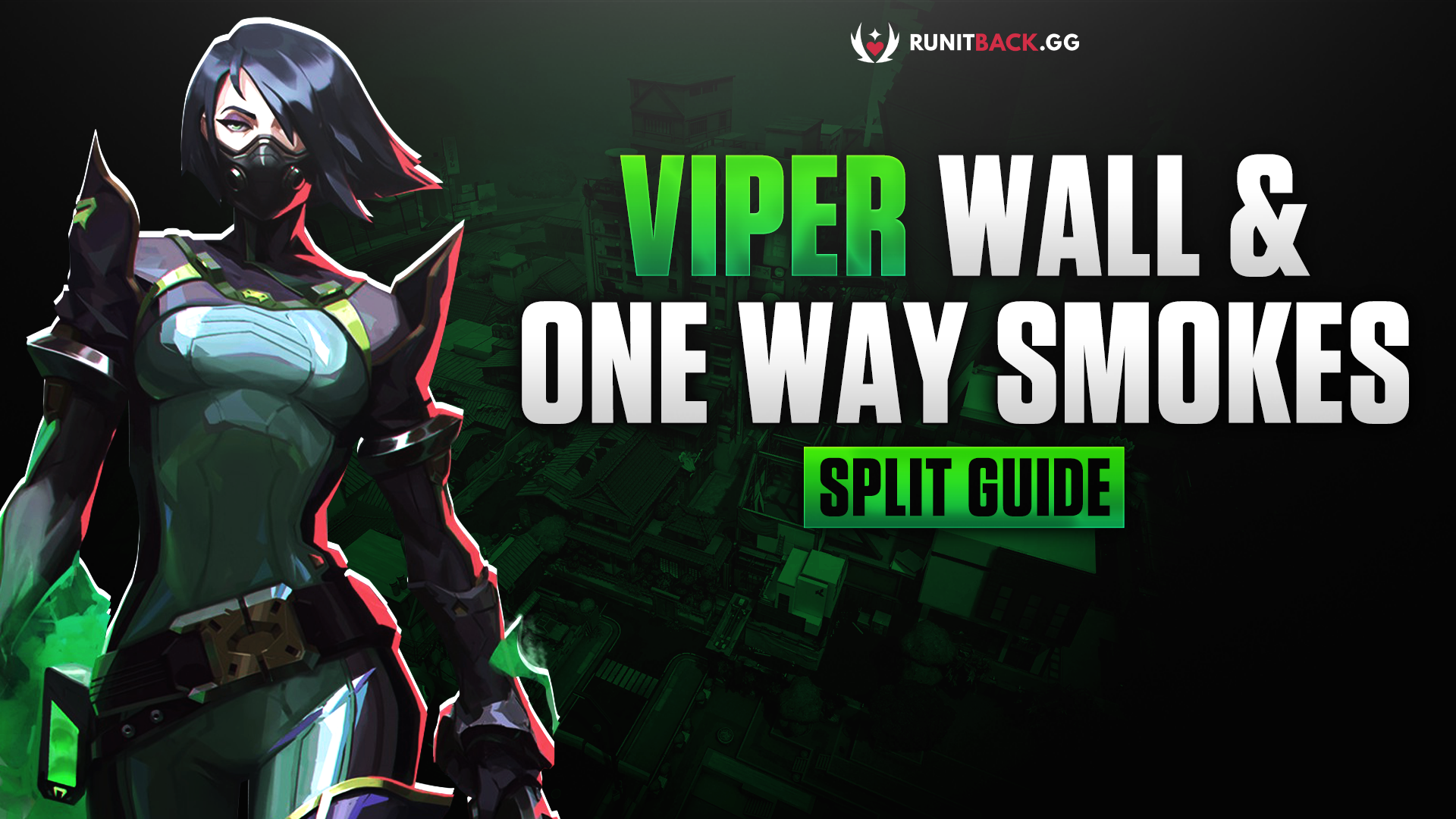 Split is hands down the best map to utilize Viper and her chemical warfare. The sites are very small compared to the other maps, making her ultimate ability quite useful. Viper’s Snake Bite can hold a position quite well, preventing enemies from pushing through the small corridors that lead to the sites. As well, there are areas for her Toxic Screen and Poison Cloud that other agents just cannot control. As a Controller, that’s her main focus, to control the map. Split is where she truly shines.

While defending A Site, lack of vision can cause a panic. Line up the Toxic Screen from A Back or A Screens all the way to Sewers. Viper can easily hug a wall near the entrance to A Site and do some damage as enemies push through. As well, the screen could hide any defending teammates on the site itself. This is bound to delay any sort of quick push the opponents had planned.

If the opponents happen to take the site, this screen could be very helpful in a retake. Stay alive and help the team defuse the spike. Set the screen and get everyone still alive into position behind it. A good idea is to push all at once to really throw the attackers off. They won’t expect a hard push as the screen goes down.

This is the best Viper Toxic Screen out of any. Setting it up in Sewer allows players to fake an A Site push and take the fight to mid or to push onto A rather quickly. If another teammate smokes off A Screens, most of the major hold points are vision impaired. Line it up correctly and the smoke will cover A Ramp and get onto the ledge of Heaven. This doesn’t just block the vision A Tower, but will cause Decay to anyone who decided to sit on the ledge.

The ability to put up the screen multiple times per round is invaluable. Once the initial push takes place and the spike is planted, enemies are sure to rotate. Let the toxin meter fill up and trigger the Toxic Screen yet again. This could easily throw off any opponent pushing through if a teammate is in Heaven. The enemy will be expecting everyone to be on the other side of the screen, but will be quickly dispatched by the lurking teammate who was not.

B Site is not very difficult to hold with the right utility. Starting near the popular boost position outside of B Garage, send the Toxic Screen emitters across and up into Heaven. This will help anyone holding mid escape if they need to or get a pick as the opponents foolishly push through. As well, the tactic of hugging the wall on the attacker side of the screen works here.

When the Toxic Screen goes up, enemies typically assume that players are using it to hide behind. Set it up and stay on their side. As they try to flash in or put up a Sage wall to block Heaven’s view of them, give them the business. The flash will probably go through the screen, leaving Viper with perfect vision. As they rush through to take the site, pick them off or wait for them all to pass and surprise them even further.

Attacking B Site with Viper works nearly the same as A Site. The only difference is the lack of area it covers, due to there being no ramp. Send it right underneath the eye of the Scuttle Shack crab. This will put it on B Heaven, preventing anyone up there from seeing onto B Site. As well, it covers the spawn side alleyway if an teammate wants to be sneaky and move back there after the spike is planted.

Pairing this with an Omen smoke to the back of B Site and a Sage wall right outside of Garage is the perfect combination. Behind the newsstand is covered, Sage blocks off anyone who might be down on the site itself, and the Viper screen takes away the vision of those in Heaven. It makes for a fast, foolproof push onto B Site.

Viper can be extremely useful when pushing through mid to take a site. These can also help teammates that are heading towards one of the sites directly. This first one points towards A Site. Line it up right in the corner of the fridge in Mid Market. This will send it across mid, allowing a slow push up or rotate to Sewer. From there it also blocks Heaven’s view of A Ramps and anyone on A Site viewing the entrance to A.

The second mid attacker screen is nearly identical to the first one. The difference is this one focuses on B Site. Approach the boxes that block off the Mid exit from Sewers. Face B Site with the retical in the middle of the top first box. This will send it across mid, through Heaven, and onto B Site. Players can push up and clear out Mail. From there, Heaven is split down the middle. If other players are pushing straight onto B Site, this covers the entrance from Defender spawn, as well.

This one way can be placed as an attacker or defender. It would typically work best as an attacker holding the site after the spike has been planted, but a sneaky defender could place it here at the start of the round with the right amount of clairvoyance. Stand at the bottom of the stairs and look up toward the center of the awning attached to A Screens. Jump and right-click to lob the device. Couple this with a Toxic Screen to block the view from Heaven and holding A as an attacker will be a breeze. This will allow Viper to see under the Poison Cloud and fire upon enemies entering from A Screens.

Lobbing is the trick here again. Stand in front of the boxes on A Ramps. Jump and lob it into the separation of the wall. The emitter will be placed and allow Viper to see those approaching up A Ramps. The best bet is to back up behind the boxes and wait for a call out. If an opponent is certainly coming up the ramp, trigger the Poison Cloud. As they push forward, Viper can easily spot them first and eliminate them.

This one is a little wild, but honestly, it works. The wall in the alleyway leading up B Garage has some really great art on it. It also has some marks that divide the wall into squares. Line up in the center of the third square from the dumpster. Hug the wall and look up. About a third of the way up the massive skyscraper is where the crosshair should be. Jump and throw immediately after. The device will land on the newsstand. Once Poison Cloud emits, anyone trying to peek from behind the newsstand in the back of B is done for.

Holding Heaven from underneath can be quite the daunting task. Opponents willingly given the high ground can be a recipe for disaster. This one way Poison Cloud can ease that burden. Just stand under the rope that leads up. Aim at the tip of the hook and throw the device regularly. This will place the device and create a one way Poison Cloud. Enemies that pull back a bit may be able to see Viper, but those that approach along the inner wall will be ripe for the picking.

Stay tuned to Run it Back for more guides, event summaries, and breaking news!